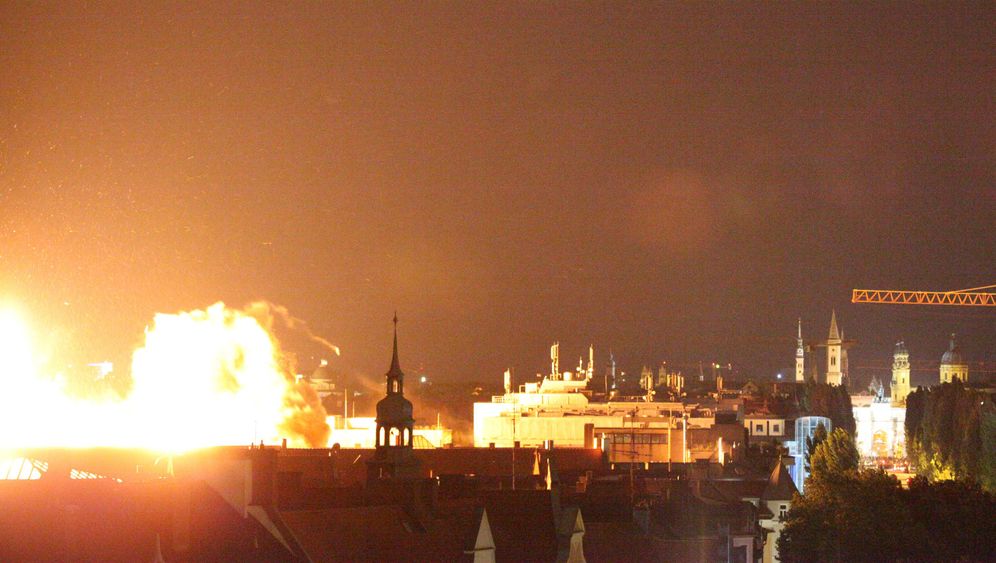 Photo Gallery: A Blast from the Past

Defusing leftover bombs from World War II hidden in the ground beneath German cities has long been routine. The area surrounding the dud is evacuated, experts arrive to defuse the explosive and before long, normality returns. Often, such operations hardly even warrant a mention in the back pages of local newspapers.

That, however, was not the situation in Munich on Tuesday night. Unable to defuse a 250 kilogram (550 pound) bomb found buried one meter (three feet) deep at the site of the former bar Schwabinger 7 in the heart of the Bavarian capital, authorities elected to detonate the explosive on site. The controlled blast, finally carried out just before 10 p.m., sent a fireball into the night sky, shattered windows in the vicinity and resulted in several small fires on surrounding rooftops. Nobody was hurt.

"Almost all the window panes in the immediate area were destroyed," Diethard Posorski, from the Munich bomb disposal authority, told journalists. A fire department spokesman added: "It looked quite spectacular."

Ahead of the detonation, some 2,500 people in the streets surrounding the site were evacuated and dozens of cars were removed, accounting for repeated delays. Several streets were closed, including the busy arterial Leopoldstrasse and parts of the ring road around the city center, as were a trio of subway stops. Further afield, thousands more residents were asked to stay inside.

The explosion was heard across the city. Clumps of hay, from the bales authorities stacked around the site in an effort to reduce the explosive concussion, caught fire in the blast and drifted onto surrounding rooftops. The blazes were quickly extinguished and damage was minor, the fire department said.

More Bombs to Be Found

The bomb, a model used by the US air force in World War II, was found on Monday during construction work. Initial attempts to defuse the explosive, however, failed due to the complicated nature of the chemical delay-action detonator. Such detonators were used on just 10 percent of the bombs dropped on Germany during World War II but they often failed; they make up a disproportionate share of the unexploded ordnance discovered in Germany. Once authorities opted for a controlled blast, thousands of sandbags were brought in to protect surrounding buildings.

By Wednesday morning, normality had returned to much of the area surrounding the site of the explosion and many streets had been reopened. But several hundred residents were still waiting to be allowed to return home.

The find is almost certain not to be the last. Tens of thousands of unexploded bombs are thought to still lie undiscovered in German cities, leftover from the Allied bombing raids that demolished the country's metropolitan areas in World War II. Officials in Munich estimate that there are some 2,500 bombs buried in the Bavarian capital alone. There have been four significant discoveries of unexploded ordnance in the city this year. Just one week ago, officials in Nuremberg succeeded in defusing a similar 250-kilogram bomb.

Experts say that the undiscovered bombs in Germany become more dangerous with each passing year. Last year, a former bomb disposal chief told SPIEGEL ONLINE that "unexploded bombs are becoming more dangerous by the day through material fatigue as a result of ageing and through erosion of safety elements in the trigger mechanisms."

World War II bombs, however, are not just a problem in Germany. Amsterdam's Schiphol airport on Wednesday morning closed Terminal C, which handles most flights to destinations in Europe, parts of Terminal D and a landing strip after workers there found an unexploded World War II bomb. Several flights were cancelled and others were delayed as a result. The airport was heavily bombed during World War II as it was used by German troops during the occupation of the Netherlands.

Furthermore, a 1.5 ton bomb was discovered in Warsaw on Tuesday, forcing the evacuation of 3,000 people in the center of the city. The explosive was of German origin, presumably a result of the 1944 bombardment of the city by the Nazis.

17 Bilder Photo Gallery: A Blast from the Past