At first glance, the gargantuan object sitting in the spotless production hall calls to mind nothing quite so much as a beached whale laid out on a dry dock. When light hits its smooth, gray outer skin from the side, the colossus shimmers almost silver, looking even more like a giant of the sea. 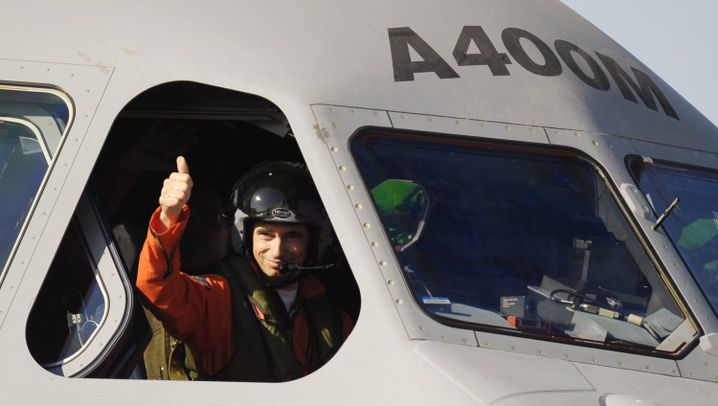 In reality, this is the prototype of the enormous A400M military transport aircraft, and it was the main attraction of the traditional New Year's Press Conference held by the European aerospace company EADS together with its most important subsidiary, Airbus, in Seville, Spain, early last week. But just like many whale species, the military transporter is endangered as well. Nevertheless, EADS CEO Louis Gallois and his Airbus counterpart Thomas Enders did everything they could at the event to ensure their problem child's survival.

"We made a mistake when we accepted a fixed-price contract for the program with unrealistic deadlines," Gallois admitted with disarming candor. Enders then added an even more strongly worded follow-up: "Without a significant contribution from our buyers, we won't be able to proceed with the program."

That threat is directed at the governments of seven European countries, including Germany, France, Spain, and Great Britain, which ordered 180 of the propeller aircraft for a price of €20 billion ($29 billion). Without an additional contribution, Enders continued, Airbus' very existence would be at risk -- and indirectly that of parent company EADS as well. Enders struck a similarly aggressive tone two weeks ago, threatening to discontinue the program.

It was an approach aimed at upping the pressure on high level negotiators from countries which had placed orders, nudging them to reach an agreement to cover as much as €5 billion-worth of cost overruns at a meeting last Thursday. But the get-together ended without concrete results. Germany in particular refused to budge.

"All those nations under contract are sticking with the program," a spokesperson from Germany's Defense Ministry said on Friday, "but not at any price." In other words, buyers would be willing to contribute a much lower amount than Airbus is asking for -- if at all.

Should no compromise be reached by the end of January, EADS' management will be forced to include additional billions in provisions for risk associated with the A400M in their 2009 books. Such a step would cancel out the lion's share of profit generated from the corporation's civilian aircraft branch.

And it may get even worse. Both Gallois and Enders have openly admitted their own failures and misjudgments -- so much so that they risk triggering criticism from a sector that has remained surprisingly reserved so far: large investment companies and shareholders' groups, along with their legal advisors. These groups are already attempting to hold current or former top managers at numerous companies accountable for real or alleged bad decisions.

The legal foundation for such an approach is clear: Legal regulations stipulate that managers and supervisors are prohibited from taking risks that jeopardize the existence of their companies. "The so-called Business Judgment Rule, or something similar, exists in the entire Western world," explains Marcus Lutter, a professor of commercial law in Bonn. "The determining factor is not only the point in time when the decision was made, but also when potential damage occurred."

Thanks to this rule, confessing their failures and misjudgments could turn out to have a serious boomerang effect for the top management of EADS.

The corporation's executive board that waved through the A400M contract in the spring of 2003 included prominent business leaders such as Manfred Bischoff, current chairman of the supervisory board for Daimler; former Daimler manager Eckhard Cordes, who now heads the retail group Metro; and Gallois. Now all of them, along with other high-ranking managers, could end up targeted by shareholders' legal advisors.

A spokesman for CEO Gallois dismisses the idea that his boss and his colleagues at the time might have transgressed due diligence requirements. "EADS and Airbus management thoroughly and consistently weighed all the risks and prospects known at that time and always acted in the interest of the corporation, its employees, and shareholders," he asserts.

Merkel to the Rescue?

Subsequent problems with a contractor's engines for the A400M were completely unforeseeable in 2003, an Airbus spokesperson argues. Similarly, he says, no one could have anticipated other adversities, such as the debacle over Airbus A380 cables or the repeated revisions demanded by clients for its planned A350 long-range jet.

Nonetheless, a rapprochement in the acrimonious battle between representatives of the manufacturer and of the countries that ordered the A400M seemed to be in the offing at the end of last week. A new round of talks is set to take place on Thursday, this time with high-ranking EADS and Airbus managers in attendance. If an agreement still isn't reached, German Chancellor Angela Merkel herself might step in, a government spokesperson indicated last week.

Should that be the case, it seems unlikely that the A400M program will ultimately be terminated. Merkel, as she has so often proven during her tenure, is not one for such radical changes of course.