Angela Merkel is beaming. She nods her head once, then twice, and pops quickly up onto her tiptoes as though she might want to jump for joy. Wearing a red blazer, Merkel is standing on the stage at the Konrad Adenauer House, her party's headquarters in Berlin.

Just a few minutes before, a large screen showed pictures of the man who had been Merkel's opponent in the election campaign, Social Democratic Party chancellor candidate Frank-Walter Steinmeier, as he imparted the bitter news of his party's defeat, then tried to explain it. The crowd at CDU central sneered at the disappointed faces in the SPD's party headquarters. And then they chanted "Angie, Angie" in the crowded foyer. The CDU's leader had to try hard to make herself heard above all the cheering. "It is not only you that are happy this evening -- I am too," Merkel said. "We have achieved something great."

All of the preliminary projections regarding the election results are unanimous: The CDU has enough votes to form a so-called "black-yellow" coalition with their desired coalition partner, the business-friendly Free Democratic Party. There are even enough votes for a stable majority in government -- "and that's a good thing," Merkel noted. 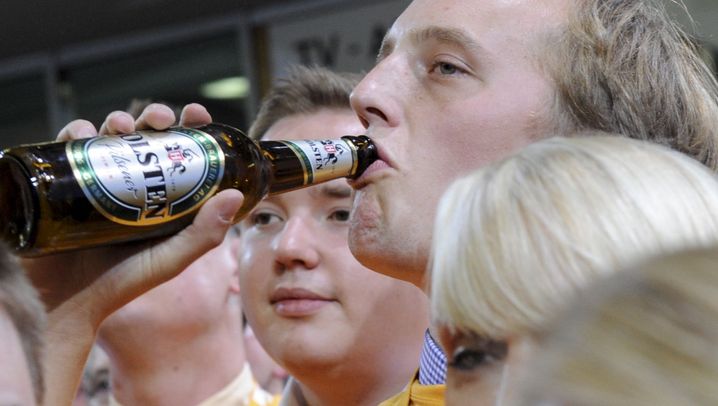 The main reason why there are enough votes for the black-yellow coalition is because the FDP has become so strong, getting almost 15 percent of the vote. In fact, FDP leader Guido Westerwelle is the biggest winner in this election, part of the reason that Merkel let him appear last in the series of live televised appearances on Sunday evening.

Shortly after 7 o'clock on Sunday evening, Westerwelle enters the foyer of the Römischer Hof, an historic building on Berlin's prestigious Unter den Linden thoroughfare. His supporters call out "Guido, Guido" and even break into triumphant soccer-style chants at one point.

Westerwelle stands on the stage with other top members of his party. Suddenly he turns around and hugs his partner Michael Mronz. Westerwelle beams at the cameras. This is the moment he has been working towards: The FDP is back in power after 11 years in opposition. Next to him stands FDP veteran Hans-Dietrich Genscher, a former German foreign minister, who appears a little dazed. Genscher, who helped to form both SPD-FDP and CDU-FDP coalitions during his political career, has been campaigning on Westerwelle's behalf. Within the party's executive committee, Genscher had already thanked Westerwelle even before the first projections were released, saying that the party's success was also a tribute to Westerwelle as a person.

Westerwelle held a short -- by his standards -- speech. He praised his party's result, the best since World War II. "We will now help to govern Germany, with a fair tax system, better educational opportunities, civil rights..." The rest was drowned out by the cheering of his supporters. "We are happy but we will keep our feet on the ground. The real work begins now." More cheers. "Those who need to explain their losses need to give long speeches. Those who are celebrating victory can keep it short," a clearly overjoyed Westerwelle quipped.

Since 5 p.m. Westerwelle has been sitting together with the FDP's executive committee in the Römischer Hof building. First they studied the interim results released by the various polling institutes, then they watched the television stations' projections on two monitors. Because of the enormous crowds of supporters, the FDP had had to move to the temporary headquarters on Unter den Linden -- its Berlin headquarters simply does not have space for the over 2,000 guests who were there on election night.

In the midst of the crowds, the head of the Bavarian branch of the FDP, Sabine Leutheusser-Schnarrenberger, is giving interviews. The FDP got 15 percent of the vote in Bavaria, a new record. Leutheusser-Schnarrenberger is a former German justice minister and she is on the list of candidates for posts in the new cabinet. "Right now we are not thinking about ministerial posts, nor are we thinking about personnel issues," she says. FDP general secretary Dirk Niebel expects that the FDP and the CDU will on Monday make the first appointments for their coalition negotiations.

The fact that the FDP wants to be a self-confident partner in the governing coalition was already clear during Sunday evening's televised discussion among the leaders of the main parties. Senior CSU politician Peter Ramsauer, speaking via a video link from Munich, talked of votes that the FDP had "borrowed" from the CSU and which he said were responsible for the FDP's strong showing in Bavaria. Westerwelle interrupted him at that point. There were no "borrowed" votes, he said -- the citizens had decided. Anyone who had voted on Sunday for the FDP was now an FDP voter, not a CSU voter, Westerwelle continued. "It's that simple," he snapped at his counterpart in far-off Munich.

On Sunday evening, CDU members were viewing the enormous self-confidence of their new coalition partner with equanimity. The general mood was philosophical regarding their party's own moderate results. After all, Angela Merkel will remain chancellor and the unpopular grand coalition with the center-left SPD is finally over. The phrase "we have achieved our election goal" could be heard everywhere. Merkel, the current and presumably future chancellor, said that her party could be "very satisfied" with the result.

But it's certain that it will not be any easier for Merkel to govern as head of a so-called "black-yellow" coalition of the CDU/CSU and FDP than it was with the grand coalition. She will in all likelihood not be able to continue playing the role she has cultivated over the past four years, namely that of a regal chancellor who presided over the grand coalition with caution and tact. Even during the coalition negotiations, the FDP will not sell themselves short. The oft-disappointed business-friendly wing of the CDU will be pleased that there will now be, thanks to the FDP, a greater emphasis on where the limits of state power should lie -- even if Merkel on Sunday evening emphasized that she wants to continue to pay attention to social equality in her policies.

In addition, the CDU's Bavarian sister party, the CSU, is certain to keep firing broadsides despite their weak performance. On the contrary, CSU chief Horst Seehofer, whose group in the Bundestag will now have just half as many seats as the FDP's, now has to stir up even more trouble if the CSU is not going to be trampled underfoot as the smallest partner in the coalition.

And the CDU's other powerful state governors will not be quiet either. The Christian Democrats may have achieved their election goal, but it's hardly a dream result. Admittedly a discussion about Merkel's role as chancellor and party leader will not take place right away. But many people will insist that, all jubilation aside, the party's result get properly evaluated this time. "It's clear that we would have liked to have done a bit better," said Jürgen Rüttgers, the governor of North Rhine-Westphalia, on Sunday evening. "We will have to take a closer look at that."

Merkel on Sunday evening also agreed that a detailed analysis of the party's showing should be carried out. When she warned cheering supporters in the foyer of CDU headquarters in Berlin that "hard work" was ahead for the Christian Democrats, everything went quiet. "I don't want to spoil the mood here," Merkel added quickly. The crowd cheered again and Merkel wished them "a nice party." The hard work and analysis could wait until tomorrow.