The energy debate is heating up in Germany with advocates of abandoning the planned nuclear phase-out pitted against those who argue that renewable energy is the way to go. Now the German government has said it plans to give a massive boost to wind power in the coming years.

Transport Minister Wolfgang Tiefensee said on Sunday that Berlin plans to build up to 30 offshore wind farms to meet the country's renewable energy targets. Speaking to the Welt am Sonntag newspaper he said the plan was to build some 2,000 windmills in the North Sea and Baltic Sea which would provide 11,000 megawatts of electricity.

"The price of oil has made this all the more pressing and the interest from investors shows that it is economically viable," Tiefensee said.

Berlin wants to reduce dependency on energy suppliers from overseas and Tiefensee says the government is aiming to obtain 25,000 megawatts of energy from wind farms by 2030. The farms, which will cost €1 billion ($1.56 billion) each to construct, are to be located in relatively deep water and will require hundreds of kilometers of cables to bring the power generated to the mainland. The first wind farm is to be erected off Borkum Island in the North Sea next year.

In June, Germany's parliament passed a law aimed at increasing the amount of power generated by renewable energy sources like wind and solar power from the current 14 percent to 30 percent by 2020.

However, there are also growing calls to increase Germany's use of nuclear energy as the price of oil soars. 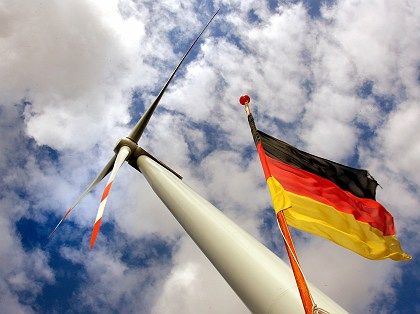 While the ruling coalition of conservative Christian Democrats (CDU) and center-left Social Democrats (SPD) had agreed to honor a previous government's decision to close down the country's nuclear plants by 2020, there are increased calls to take another look at the nuclear phase-out. Many in the CDU, including Merkel, argue that this hinders Germany's efforts to reduce dependency on fossil fuels. The SPD, on the other hand, is firmly against increasing reliance on nuclear power.

Tiefensee, a member of the SPD, said on Sunday that investing in energy sources such as wind was a better option. "We believe in renewable energy and not in nuclear energy."