The boyfriend of Nadja Drygalla, the German Olympic rower, insisted on Monday that he had quit the neo-Nazi scene as a debate raged on about whether their relationship warranted her decision last week to quit the team.

Michael Fischer, 24, a former leading member of the National Socialists Rostock, an extremist right-wing group, and a regional parliamentary candidate for the far-right National Democratic Party (NPD) last year, told the German news agency DPA on Monday that was no longer a neo-Nazi.

He said that he had decided before the London Olympics "to take the step to stop being a neo-Nazi."

Asked if he regretted his past membership, Fischer said: "I was aware of what the consequences for me would be. So I wouldn't say I regret it. But I wasn't doing Nadja in particular a favor, so it would have been better if I had never done it."

Drygalla had told DPA on Sunday that she had known Fischer for around five years and that his neo-Nazi activities had put a strain on their relationship. She insisted that she did not share his views and that she had played a part in his decision to leave the scene.

"I must say very clearly that our relationship was very heavily burdened by it and I said clearly in many discussions that I don't share this opinion and don't support him," she said.

'Sitting Next to Blacks and Pakis on the Train'

The NPD confirmed that Fischer had left the party at the end of May. But media reports indicated that he wrote a comment about the "left-wing foreigners' lobby" on the far-right website MUPinfo.de in mid-June.

There were also reports that Fischer had written sarcastic comments on his Facebook profile at the end of July during a visit to London to watch his girlfriend compete at the Olympics. "I am delighting in international understanding. Sitting next to blacks and Pakis on the train," he wrote, according to media reports.

In February, Fischer took part in a neo-Nazi demonstration against a memorial service for Mehmet Turgut, one of the immigrants shot dead by the National Socialist Underground terrorist cell, according to NDR, a regional public broadcaster. NDR also reported that it had photos showing Fischer at neo-Nazi events in May.

The case has triggered a debate in Germany over whether Drygalla is being unfairly persecuted and subjected to guilt by association. Others say she should not have been allowed to compete for Germany in the first place because she evidently tolerated his activities enough to share her life with him, making her unsuited to represent her country at the world's most prestigious sporting event.

She left the Olympic Village last Friday after reports about her relationship prompted the head of the Olympic team, Michael Vesper, to have a conversation with her.

Politicians have called for an inquiry into whether German sports officials knew about Drygalla's relationship before they selected her for the rowing team. She was pressured into resigning from the police force last October because Fischer was her partner.

German Interior Minister Thomas de Maizière defended Drygalla and said her personal life had been intruded on. "Is the public really entitled to screen the friends of sportswomen and sportsmen, to look what's going on there?" the minister told journalists on Monday. "Must we demand that sportswomen and sportsmen reveal who they are friends with, what they think? Where does one draw the line?"

Drygalla has said she wants to continue competitive rowing. Sports officials say they will discuss her future after the Olympics but haven't ruled out that she can continue. 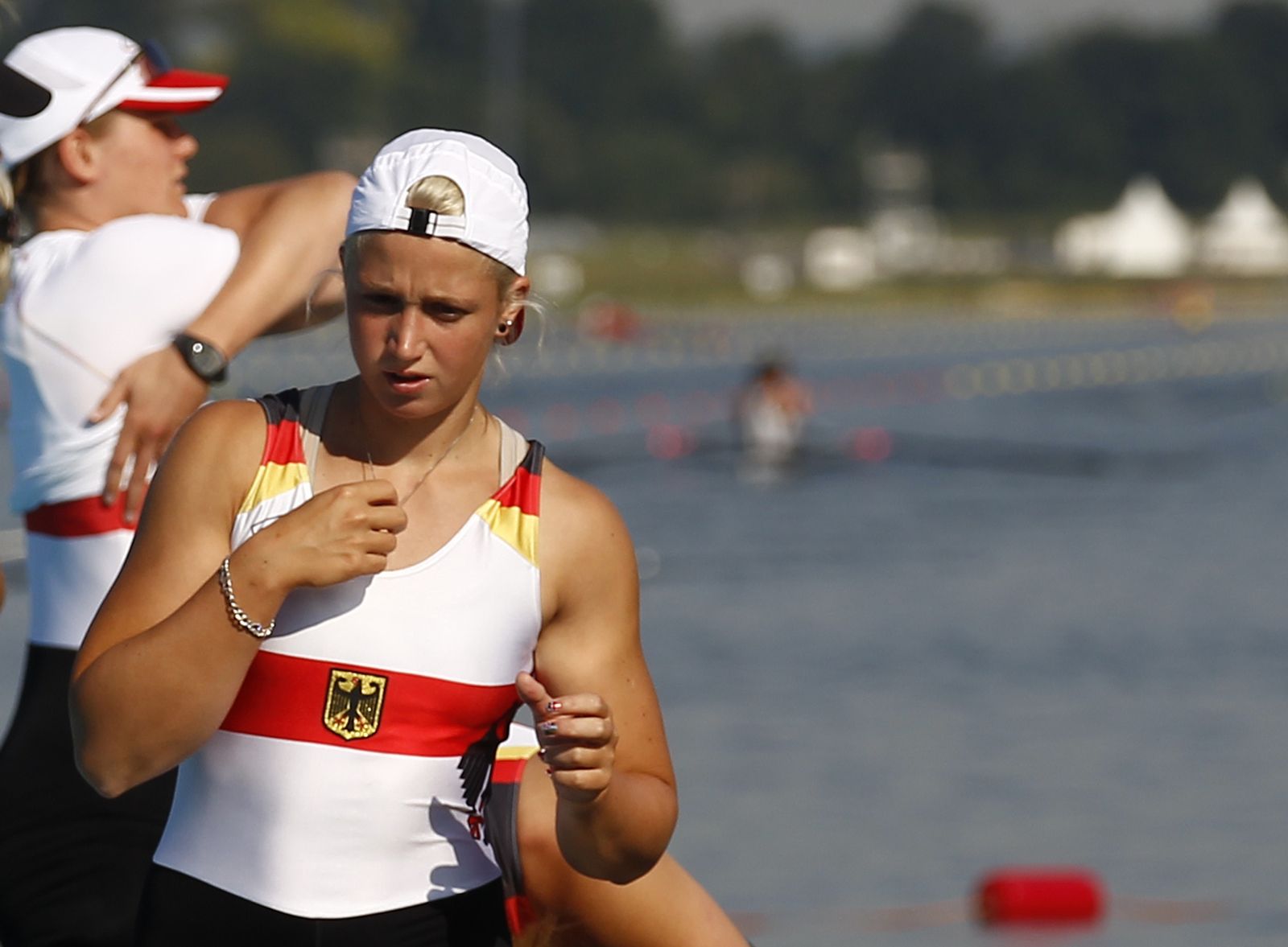