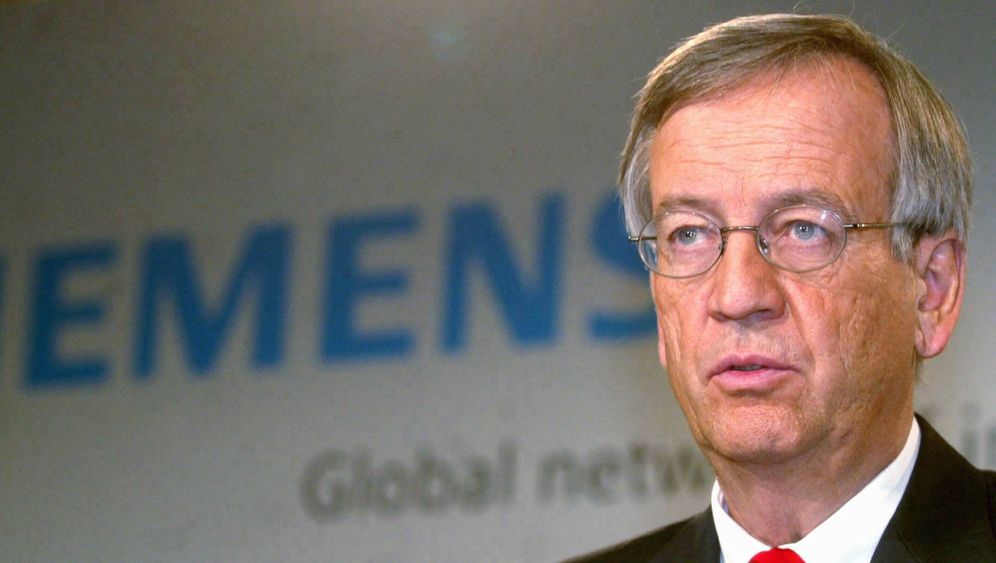 Heinrich von Pierer, the former CEO of German engineering giant Siemens, prefers not to talk about the large-scale corruption scandal at the company that first came to light in 2006. For years, the man once known as "Mister Siemens" has largely been refusing to give interviews to the press. Those interviews he has granted hardly merit the name.

But his long silence will apparently end in January when Pierer finally speaks out, albeit in a form that allows no one to contradict him. His autobiography, titled "Gipfel-Stürme" ("Storms at the Summit"), will appear on Pierer's 70th birthday. The 352-page book represents Pierer's account of events, and he apparently believes that he can finally provide that account without running any risks.

After all, Siemens already closed its file on Pierer a year ago. That cost him €5 million ($6.6 million) -- his contribution to the billions in fines that the company had been ordered to pay in relation to the corruption scandal. The public prosecutors had also imposed a six-figure fine on Pierer for negligence in his supervision duties -- a misdemeanor -- thereby settling the matter.

All of this was achieved without the former Siemens CEO ever having admitted to any involvement in shady business dealings. At most, he accepted political responsibility for the fact that the company paid bribes for contracts all over the world during his tenure.

Fines Are Not Enough

But this doesn't mean that the case is closed for Pierer. Nor is it closed for a number of other former top managers, who spent another €14.5 million in out-of-court settlements to buy their way out of being sued for damages by the company. Now criminal prosecutors in the United States are seeking to put the former Siemens executives on trial in US courts. For them, the fines are apparently not enough.

A few weeks ago, officials with the US Justice Department and the Securities and Exchange Commission (SEC) questioned the current supervisory board chairman, Gerhard Cromme, as well as former auditors from the era of large-scale corruption. They were due to return to Germany this week.

Although the US authorities agreed to a settlement two years ago, it only applied to Siemens itself. The SEC and the Justice Department dropped the case against the company in return for an $800 million payment.

But this doesn't mean that the hunt for the men who supported and protected the bribery system is over for the Americans. At the very top of their list is Pierer and Uriel Sharef, the former head of the power plant division, who was also in charge of the company's South American business. The Americans are particularly interested in Siemens projects in Argentina, Venezuela and Colombia.

'Nobody Went to Jail'

The fact that the former executive Pierer is about to face a new storm has a lot to do with another old man, someone with a reputation for tenacity. On May 4, Pennsylvania Senator Arlen Specter, 70, a Democrat, chaired a hearing in Washington before the Senate Judiciary Subcommittee on Crime and Drugs. In the hearing, Specter railed against the Wall Street gamblers and cynics who had risked billions and dragged down the global economy in the process -- without any of them having been made to feel the brunt of the law.

Even before the hearing, Specter argued that lawmakers should consider imposing jail sentences in such cases. Fines, he said, were not a deterrent and were even factored into the equation from the start. "A jail sentence is enormously different," he said.

Specter was particularly upset about three cases in which, in his view, the people at the top had gotten off much too lightly. One of them involved Siemens. Specter told the subcommittee that even though the company had paid $800 million in fines, it still made a profit of about $2.5 billion in 2008 alone. "And nobody went to jail."

Specter grilled Lanny Breuer, the assistant attorney general for the Criminal Division, who quickly realized that the cranky old senator was not about to be placated with numbers. In the Justice Department's defense, Breuer said, it had inserted a clause into the deal with Siemens, which stated that the individuals who had been involved in bribery would still be prosecuted.

"You are saying that you're really going to go after some people in this Siemens matter?" Specter asked.

In his reply, Breuer said: "The matter is not closed."

It looks as though the US investigators are serious. Apparently the head of the Justice Department's anti-corruption unit recently fired up his troops, saying that if no one went to prison in such a huge case, "then we have failed."

Because it is listed on the New York Stock Exchange, Siemens is subject to US law, and the Americans have been requesting documents from Munich recently to pursue their case. A group of investigators was due to fly to Germany this week, officially to meet with Theo Waigel, a former German finance minister who belongs to the conservative Christian Social Union (CSU) and who had been appointed as compliance monitor at Siemens. But after the obligatory meeting, the investigators wanted to meet with people familiar with the corruption scandal, in the hope that they would provide them with relevant -- in other words, incriminating -- evidence.

To that end, they were first due to meet with Hildegard Bäumler-Hösl, the head Siemens prosecutor at the Munich public prosecutor's office, on Wednesday. The office was unwilling to confirm that the meeting was scheduled, which wasn't necessarily the result of the typically tight-lipped approach in the profession. Instead, it could have something to do with their feeling uneasy about the Americans' ambitions.

The famous German-American friendship supposedly unites the investigators in the Siemens case. In truth, however, the Germans take a suspicious view of the American attempt to reopen cases that were closed in administrative trials in Germany. There are rumors that the Americans are mainly targeting Pierer, who ran the company during the period of systematic corruption. The US prosecutors want to at least put him on trial for being one of the executives who signed off on financial statements contaminated with bribe money, which could cost Pierer millions more if convicted. But they would rather prove that he was involved directly in bribes.

In Munich, Pierer was treated with kid gloves by comparison. The prosecution never named him as a defendant in a criminal trial. And when witnesses or defendants mentioned his name during a hearing, often it didn't even trigger further questions.

For example, former chief financial officer Heinz-Joachim Neubürger testified that Pierer had once reprimanded him for reversing an accounting entry. The prosecutors failed to ask obvious questions such as how and why he was reprimanded. Nevertheless, it was clear that the accounting entry that was being shifted around, because no Siemens division wanted it on its books, was a presumed bribe from 2003 that was connected to a project in Argentina.

The US investigators are now particularly interested in this Argentina affair. Even during the German investigations, one of the most explosive questions of all was whether Pierer had known about shady payments to politicians in Buenos Aires.

Things could get dicey again for Pierer. They could get even more uncomfortable for Uriel Sharef, a member of the Siemens management board until 2007. The Munich prosecutors suspect that he was involved in transfers of illegal money to Argentina.

The details of the case have since been largely cleared up. A government contract in Argentina was expected to yield billions in sales and, more importantly, a handsome profit in the three-digit millions. In 1998, the government of then President Carlos Menem issued a decree awarding a contract to the Siemens subsidiary Siemens Business Services (SBS) to produce forgery-proof identification cards for all Argentineans. But Menem was voted out of office in 1999 and his successor Fernando de la Rúa cancelled the project in 2001.

Siemens stood to lose the investment it had already made, which totaled at least $200 million. Even worse, the company had become hopelessly entangled in a network of advisers who continued to demand payment for years. At times, they claimed it was to revive the project, probably with bribes. At other times, they told Siemens that they needed the money to pay bribes they had promised to leading members of the Menem administration.

The advisers' methods were not always savory. In one case, a local Siemens employee reported to headquarters that he had been threatened with kidnapping unless Siemens finally sent millions in payments.

According to an investigation report by the Bavarian State Office of Criminal Investigation, Siemens paid about $51 million between 1998 and 2004, first to buy the contract and later to get out of it. A large portion of the money went to offshore companies in the Caribbean through sham contracts. Two of the companies were called "Pepcon" and "Mirror," which the investigators have linked to Menem and his then Interior Minister Carlos Corach.

In 2001, a Siemens lawyer made it clear that the demands from Argentina were unjustified. But at a board meeting in 2002, Sharef announced that there was an additional need for liquidity in Argentina to the tune of €23 million. The money, he said, was needed for "special issues." Apparently nobody had anything else to say about the matter.

Two SBS managers have testified that they had adamantly opposed payments from their company's coffers. What was the legal justification, they asked? But several board members -- CFO Neubürger, SBS executive Volker Jung, South America chief Sharef and Pierer -- apparently made it clear to them that it would be better if they solved the problem instead of constantly getting in the way. According to the statement of one of the SBS managers, Pierer, during a chance meeting in the hallway at Munich headquarters, "clearly expressed his lack of understanding for the refusal of SBS management to cooperate, as well as his expectation that these payments would be made."

After that, Sharef allegedly procured money for Argentina on two occasions. The first sum amounted to about €13 million, with some of it coming from a slush fund in Dubai. "Dr. Sharef was aware of the existence of these payments," reads an investigation report, which also states that it was "obvious" that other top executives at Siemens knew about the honey pot, but that this could "not be proven conclusively." A second payment, for $4.7 million, which Sharef allegedly ordered, was supposedly disguised with fake invoices.

When CFO Neubürger finally tried to enter €9.6 million -- part of the money Sharef had apparently sent to Argentina to smooth ruffled feathers there -- as a liability in the SBS accounts in September 2003, SBS management protested again. "Siemens Business Services will not accept this liability, due to a lack of legitimacy," SBS wrote in a letter to Neubürger, which was also sent to Pierer and Sharef. A lack of legitimacy? As far as is known, neither of the two men reviewed the case.

Sticking to His Story

Former Argentine President Menem could not be reached for comment, and former Interior Minister Corach said that he had not received money from Siemens, either "directly or indirectly." Siemens executive Sharef did not respond to a SPIEGEL inquiry. Former CFO Neubürger has denied having known anything about bribe payments, and Jung has repeatedly insisted that bribes were "not an issue" for him.

Pierer is also sticking to his story, namely that he never participated in bribery and knew nothing about it. He says that he is not aware of any US investigations, and as far as the Argentine matter is concerned, he has already denied all allegations. Statements that incriminate him, says Pierer, are "not credible."

Everything else Pierer has to say will soon appear in his autobiography. The US investigators are unlikely to find much of interest in the book. Nevertheless, Pierer has no reason to let down his guard.