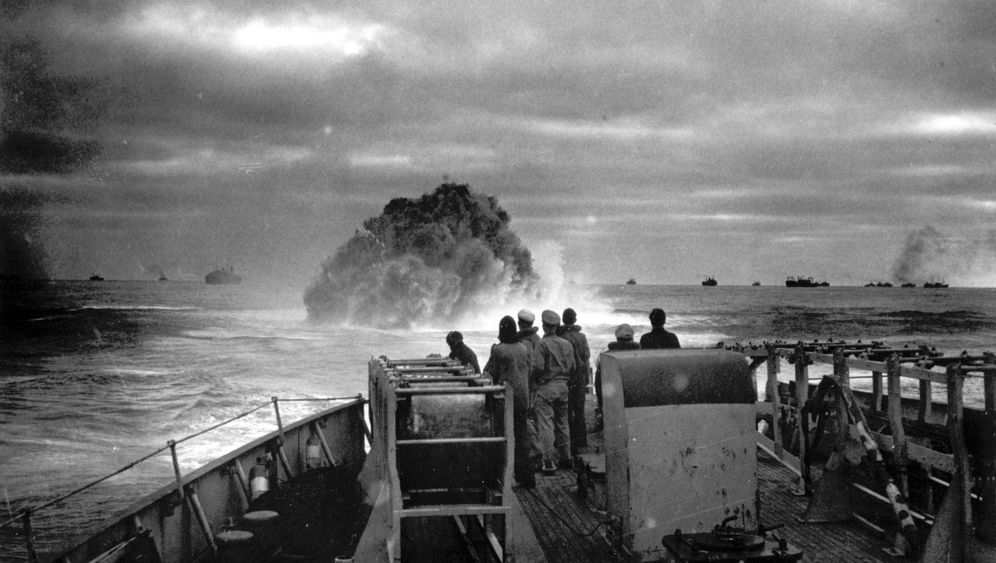 On the old game show "What's My Line?" Briton Mark Dunkley might have been described with the following words: "He does what many adventurers around the world can only dream of doing."

Dunkley is an underwater archeologist who dives for lost treasures. His most recent discoveries were anything if not eerie.

On the seafloor along the southern and eastern coasts of the UK, Dunkley and three other divers have found one of the largest graveyards in the world's oceans, with 41 German and three English submarines from World War I. Most of the submarines sank with their crews still on board, causing many sailors to die in horrific ways, either by drowning or suffocating in the cramped and airtight submarines.

Several U-boats with the German Imperial Navy are still considered missing today. Lists provide precise details on which of the U-boats the German naval forces had lost by the time the war ended in November 1918.

But it was completely unclear what had happened, for example, to UB 17, a subway crewed by 21 men under the command of naval Lieutenant Albert Branscheid. Neither was it clear where the 27-member crew of UC 21 -- a minelayer commanded by naval Lieutenant Werner von Zerboni di Sposetti -- had perished.

But now things have changed.

Dunkley and his team of divers found UB 17 off England's east coast, near the county of Suffolk. UC 21 sank nearby. The fate of many other submarines, especially those that had suddenly disappeared in the last two years of the war, can now be considered known.

All of the sunken U-boats are relatively close to the coast, at depths of no more than 15 meters (about 50 feet). The diving archeologists will undoubtedly find the remains of sailors with the German Imperial Navy inside the wrecks. In the language of archeology, such finds are referred to as "disaster samples." In any case, the divers will be searching for signs of the crewmembers that died inside the U-boats.

"We owe it to these people to tell their story," says Dunkley. He works for English Heritage, a public body that is part of the Department for Culture, Media and Sport. Its primary mission is to secure Britain's cultural heritage.

The British could see it as a peculiar irony of history that these measures are now benefiting the heritage of their former enemy. Since the Germans attacked civilian targets in World War I, British propaganda derisively referred to the submarines as "baby killers."

"Many have forgotten how successful the German U-boat fleet was for a time," says Dunkley -- an assessment that is by no means intended to glorify the German attacks. In fact, one of the goals of the most recent English Heritage project is to remind people that, although they might be more familiar with submarine warfare from World War II, the ships also caused considerable devastation in the previous world war.

Indeed, it had practically vanished from popular memory that the Germans caused great losses to their main enemy, Great Britain, in World War I through targeted torpedo strikes against the British Merchant Navy. At the beginning of the war, there were only 28 U-boats under the supreme command of Kaiser Wilhelm II, a tiny number compared to the Allied fleet.

At first, many political decision-makers in Berlin were unclear about exactly how the military devices, which were still novel at the time, could be used. Grand Admiral Alfred von Tirpitz had such a low opinion of the importance of the steel diving vessels that he even referred to them as a "secondary weapon."

An operations order signed by Kaiser Wilhelm on July 30, 1914 also assigned a secondary role to the U-boats at first. Under the order, they were to be used primarily to engage hostile ships in naval battles with the Imperial High Seas Fleet, which had been upgraded at considerable cost.

But after a German U-boat sank three English armored cruisers, an unbridled enthusiasm erupted in the German Empire for this still relatively untested form of naval warfare. A large number of volunteers signed up for submarine duty, even though serving in the cramped cabins was practically a suicide mission at the time, especially in comparison with the types of underwater vessels used in World War II and, even more so, today's submarines.

The conditions inside the boats were claustrophobic and extremely hot. There were cases in which entire crews were wiped out when a torpedo misfired. Likewise, since aiming torpedoes was still such an imprecise science, the submarines had to come dangerously close to enemy warships. And if spotted, they became easy prey: Early submarines moved through the water so slowly that enemy warships could easily take up pursuit and sink the attackers, either with depth charges or by ramming. In fact, some 187, or almost half, of the 380 U-boats used by the German navy in World War I were lost.

A Race Against Time

Dunkley and his colleagues examine the wrecks with ultrasound sonar devices they wear on their wrists like watches. The devices allow them to measure wall thickness and determine the extent to which corrosion has already eaten away at a ship's hull.

Measures to secure the vessels are urgently needed, says Dunkley. Since the U-boat graveyard at sea is gradually disintegrating, time is of the essence for the archeologists. Under the strict guidelines of the UNESCO Convention on the Protection of the Underwater Cultural Heritage, the World War I wrecks sitting on the seafloor are currently not even considered archeological artifacts deserving special protection.

The disintegrating war machines are currently just shy of the 100 years required to attain this status. For this reason, Dunkley's team is trying to wrest as many secrets as possible from the wrecks in the coming months.

In cases where mines or torpedoes have torn large holes into the vessels, the archeologists can even peer inside. When this is not the case, robotic vehicles will cut open the hatches of the steel coffins and go inside.

"We divers only approach the boats with great caution. Venturing inside would definitely be extremely dangerous," Dunkley says.

It is hard to determine how almost a century of lying in place, as well as sedimentary deposits, have changed the structural integrity of the wrecks. If a U-boat turns over as a result of the divers' movements, its narrow corridors could become deathtraps.

The treatment of the crews' remains is also complicated. By law, the sites are considered inviolable gravesites. Nevertheless, the archeologists don't want to miss the opportunity to try to recover other signs of the erstwhile sailors in the underwater crypts. "Perhaps we'll find a cup or a sign with a name on it," Dunkley says.

Attacking and Sinking in Groups

The marine archeologists were struck by the fact that sometimes two or three German U-boats were found lying in close proximity to one another. For historians, this serves as evidence of a certain German combat strategy in an especially drastic phase of the U-boat war.

In February 1917, the Imperial Navy had altered its strategy and was now torpedoing and firing guns at British commercial ships on a large scale. The Royal Navy reacted by providing the freighters with warship escorts, as well as using airships and aircraft to spot enemy submarines from above.

German military strategists devised a plan to break up these massive convoys: attacking the naval convoys with several U-boats at the same time. But the strategy was difficult to implement because it was very difficult to coordinate such complex maneuvers at the time.

Historians are divided over whether the convoy system ultimately saved the United Kingdom from defeat or whether it was the United States' entry into the war on April 6, 1917.

Before then, the British had relied on creativity to fend off U-boats and other enemy ships. The hulls of their own ships were painted with confusing patterns designed by artists at the Royal Academy in London. But there is no historical evidence to prove that this measure saved even a single ship from the German torpedoes.