SPIEGEL: Professor Grayling, will you really try to arrest the pope when he comes to Britain this week?

Anthony Grayling: If I got anywhere near him -- yes, I would like to try it. English law provides for the possibility of a citizen's arrest.

SPIEGEL: But only if there is no doubt about the person's guilt, there is an imminent danger and there are no police around ...

Grayling: ... and that probably won't happen. There's also only a very slight hope that we will succeed through legal proceedings. All in all I'd say: The chances of getting the Pope arrested this week are quite slim, unfortunately.

SPIEGEL: Wasn't that idea a little over the top anyway?

Grayling: Let me explain this in the most neutral terms. For decades, priests have sexually abused thousands of children, in this country and in many others. These are serious crimes. The hierarchy of the Roman Catholic Church has been systematically instrumental in covering up these crimes, hiding people who committed them from public prosecution and in numerous cases allowing the abuse of children to go on. The conspiracy has gone all the way to the top. We know there are questions on Pope Benedict himself. When he was head of the Congregation for the Doctrine of the Faith, he knew about some of these cases and participated in the cover-ups himself. That is a conspiracy -- there is no other word for it. It is organized crime.

SPIEGEL: And you think the pope should go to jail for that, like any mafioso?

Grayling: If the head of a drug cartel was involved in a conspiracy, we would ask some very serious questions once he came to the UK. Why should we treat the pope any differently?

SPIEGEL: One reason is because he is on an official state visit and accordingly enjoys immunity from prosecution.

Grayling: That's indeed very frustrating. Ratzinger should at least be persona non grata -- and not a guest of the queen. We now have the very awkward situation of a person being invited and welcomed by the queen and the prime minister who is the head of an organization that is involved in a serious conspiracy. But actually, the whole thought of a papal state visit is just absurd.

Grayling: The Vatican is no state. It has no permanent population, no native Vaticanians and a territory of just 0.16 square miles (0.41 square kilometers). It is a garden in Rome with buildings on it. The idea that the head of a religion living in this garden should be accorded all the same courtesies as a real president is a kind of travesty.

SPIEGEL: But this garden is recognized by 178 countries as a state.

Grayling: Just because lots of people think it is a state doesn't make it one. Italian dictator Benito Mussolini invented the state of the Vatican in 1929. The pope at the time, Pius XI, praised him as "the man sent by Providence." I'm quite sure that some good lawyers would be able to "unstate" the Vatican again. The pope could then easily be arrested for his crimes. We definitely shouldn't tolerate any attempts of the Catholic Church to escape justice.

SPIEGEL: Aren't you just an angry atheist keen on damaging the papacy at all cost?

Grayling: Not at all. Everybody is entitled to believe. Churches have exactly the same right to exist as a football club, a trade union or a political party. But if you and I set up the Church of the Fairies of the Garden, then I don't think we should automatically be meeting the queen, be entitled to seats in the House of Lords or get public money for our fairy schools. If we shouldn't have these rights, than I don't think that the men in skirts should have them. For historical reasons and all the myths that surround them, churches still have an overinflated footprint in society -- and we should urgently change that. 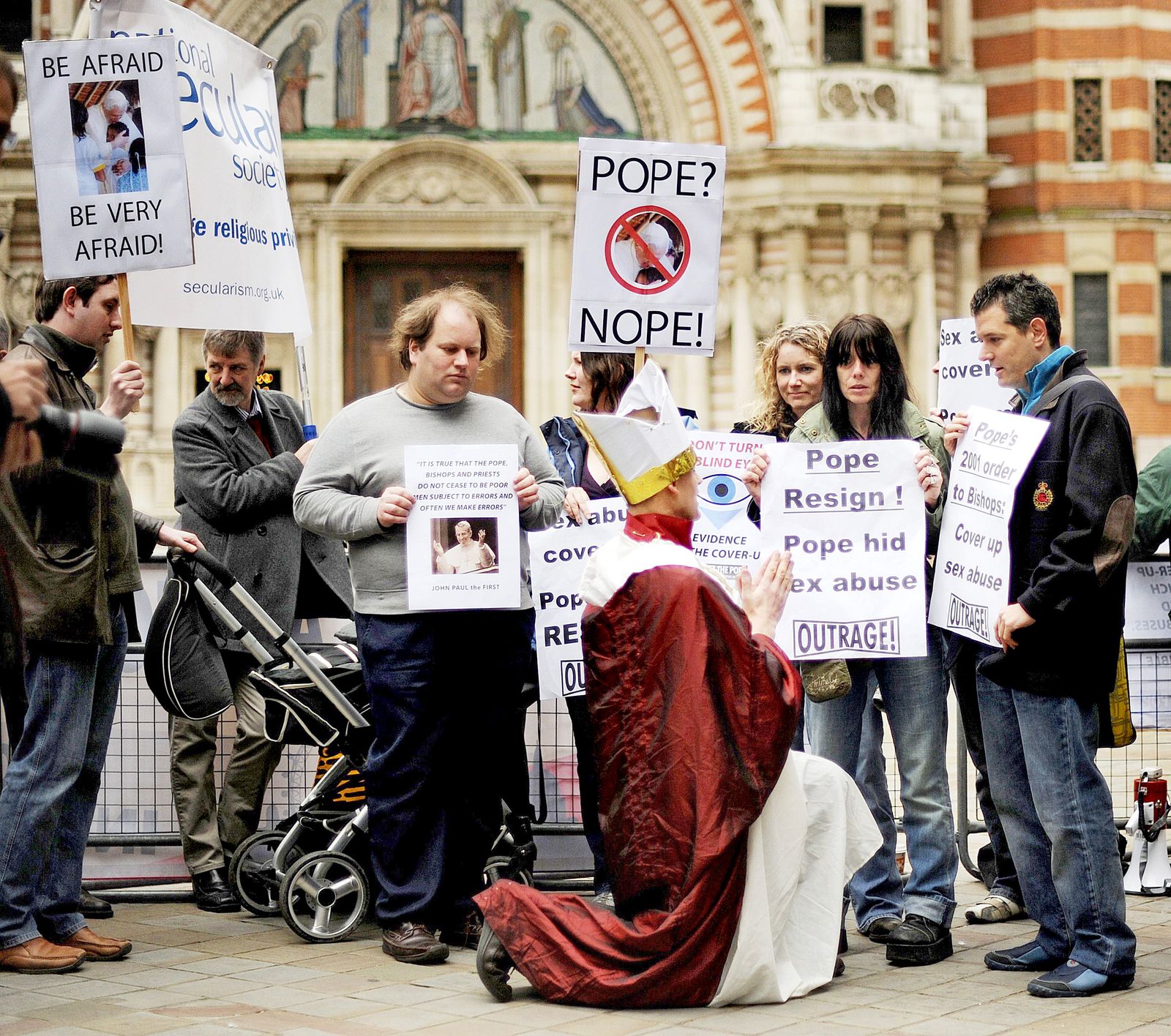 Protesters in London call for the resignation of Pope Benedict XVI over the abuse scandals in the Catholic Church (March 2010 photo).