The art of diplomacy involves never saying never and always leaving possibilities open. Viewed in that context, Jean-Claude Juncker's spokesman chose some unusually clear words this week, saying that if Turkish President Recep Tayyip Erdogan moves to bring back the death penalty in the country, he will have crossed the "reddest of red lines."

Such were the preliminary conclusions following Turkey's constitutional referendum last Sunday. Some 51.4 percent of Turkish voters cast ballots in favor of their president's plans to restructure the government according to his whim. "We can no longer simply return to business as usual," EU Enlargement Commissioner Johannes Hahn of Austria said in response.

That especially applies to Germany, which is currently coming to terms with the fact that 412,00 Turks living in the country voted in favor of Erdogan's referendum -- 63.1 percent of them, in fact, a higher result than in Turkey itself. One can, of course, seek to play down those numbers, by pointing out, for example, that every second Turkish-German eligible to vote chose not to cast a ballot. Or that a significant number of children or grandchildren of Turkish immigrant families weren't allowed to vote because they only possess German citizenship. And all of that is true. But at the end of the day, 412,000 Turks living in Germany voted in favor of Erdogan's referendum. They voted against democracy.

It should provide little comfort that the situation is similar in France, Belgium, Austria and the Netherlands, which are also home to Turkish immigrant communities. The percentages may be different, but the trends are the same.

So, what can be done? Enlargement Commissioner Hahn has long viewed the Turkish EU accession process critically. He believes the more pressing priority is that of establishing a customs union with Turkey and working more closely together in areas of mutual interest -- rather than continuing the annual tradition of the EU issuing a progress report on Turkish accession in which the country consistently gets terrible grades.

Ultimately, however, it is not the European Commission's decision to end negotiations with Turkey. A decision by the member states would be required, but right now there is no sign of that happening.

Even with calls growing louder within the EU to end the negotiations, both German Chancellor Angela Merkel, of the conservative Christian Democratic Union (CDU), and Foreign Minister Sigmar Gabriel, of the center-left Social Democrats (SPD), are not in favor of ending the talks. Merkel, after all, needs Turkey for the refugee deal, hoping that Erdogan will continue to prevent thousands of migrants from once again crossing the Aegean Sea on their way to Europe.

Jürgen Hardt, the conservatives' foreign policy spokesman in parliament, has warned against "slamming the door shut on Turkey from our side." He argues that such a step must be taken by Turkey. "The myth being spread by Erdogan -- that Europe doesn't want Turkey and that the only path open to the Turkish people is isolation under a nationalist, illiberal ruler -- is at the core of his power play and we should not reinforce it," he says.

But among German conservatives, other voices are pushing for action. Merkel's CDU and its Bavarian sister party, the Christian Social Union (CSU), have long preferred a "privileged partnership" with Turkey rather than full EU membership. Now it's high time that we free ourselves "from the paralyzing fiction of EU membership," says Norbert Röttgen, the CDU politician who chairs the Foreign Affairs Committee in German parliament. "The EU has to make clear to Erdogan that his behavior will have consequences," he says. "They need to suspend accession talks."

Does Turkey belong in Europe? The outcome of Sunday's referendum has rekindled the decades-old debate and provided fresh fodder for those who have always answered "no."

And what about the around 3 million people with Turkish roots living in Germany? "We can't make the mistake of lumping all the Turks living here into the Erdogan camp," says Thomas Kufen, the CDU mayor of Essen and former integration commissioner for the state of North Rhine-Westphalia. More Turks in the consular jurisdiction of Essen voted in favor of Erdogan's constitutional referendum than in any other city. Attempting to explain the results, he says: "Our immigrants came as guest workers (in the 1950s and 1960s) and have worked in the coal mines, the coking plants and the steel mills. They originate from the rural parts of Anatolia, where support was highest for the referendum." But Kufen also says he has no understanding for how people "could basically curtail democracy and freedom in their homeland from the comfort of their sofas here."

'Blame for Both Sides'

Similar statements can be heard from many German politicians at the national level. "We have a lot of catching up to do," says Thomas Oppermann, parliamentary floor leader for the SPD. "Both sides share the blame -- after all, Germany went for decades without having an integration policy of any kind, and many Turks grew comfortable in a kind of parallel society." Stephan Weil, the SPD governor of the state of Lower-Saxony, is calling for "clear allegiance to the German constitution and behavior which reflects that" in order to be accepted on equal footing. Michelle Müntefering, head of the Turkish-German parliamentary group in the Bundestag and a member of the SPD, says that Turkish-Germans need to be asking themselves, "How you can live in one democracy while at the same time wanting to eliminate it in another country?"

The debate has been particularly heated among conservatives, where questions are being raised about Germany's dual citizenship laws. At its annual party conference last December, the CDU called for a return to the old system, under which children born to Turkish parents in Germany should be forced to choose a single nationality. But Merkel made it clear that she did not feel bound by the resolution.

Now some in her party, particularly those critical of Merkel's refugee policies, are pushing for a restoration of the old citizenship rules to be anchored in the party's political platform ahead of parliamentary elections in September. For her part, Merkel is seeking to find a compromise under which children born to migrants in Germany could retain dual citizenship, but the third generation born here could not.

For a time, at least, it looked as though she had a real chance at pushing the compromise through. But the situation has changed following the referendum. "It was the right move for the CDU to affirm its position opposing dual citizenship at its party conference," says Daniel Günther, the party's candidate for governor in upcoming Schleswig-Holstein state elections. Meanwhile, the CSU, which had been reticent on the issue, has now arrived at a clear position. "The CSU and the CDU have a clear resolution envisioning the return" to the old model, says the party's general-secretary, Andreas Scheuer. "We should be clear about this in the campaign."

Merkel can see that her room for maneuver on the issue is narrowing. But she wants to follow developments in Turkey and in state elections in Schleswig-Holstein and North Rhine-Westphalia in May before making a decision. But one thing is certain, according to a source close to Merkel: "Following the referendum, it is no longer conceivable that we will keep things as they are."

The degree to which the situation escalates will also depend on the Turkish community, but the question there is who, exactly, can speak for the overall Turkish population? One of the first groups German politicians usually turn to is the Turkish Community in Germany (TGD). But TGD has a liberal bent and most Erdogan supporters in Germany want nothing to do with it.

"We should feel a responsibility to Germany, because Germany is the country in which we live," says TGD Chairman Gökay Sofuoglu. The Stuttgart resident, a member of the SPD, wants to take advantage of upcoming national elections in Germany to promote dialog and democracy. He says his organization will invite the top candidates in the German states to discussion panels so they can present their parties' respective plans for integration and promoting equal opportunity. "Questions like those," says Sofuoglu, "influence everyday life in Germany more than a referendum in Turkey." 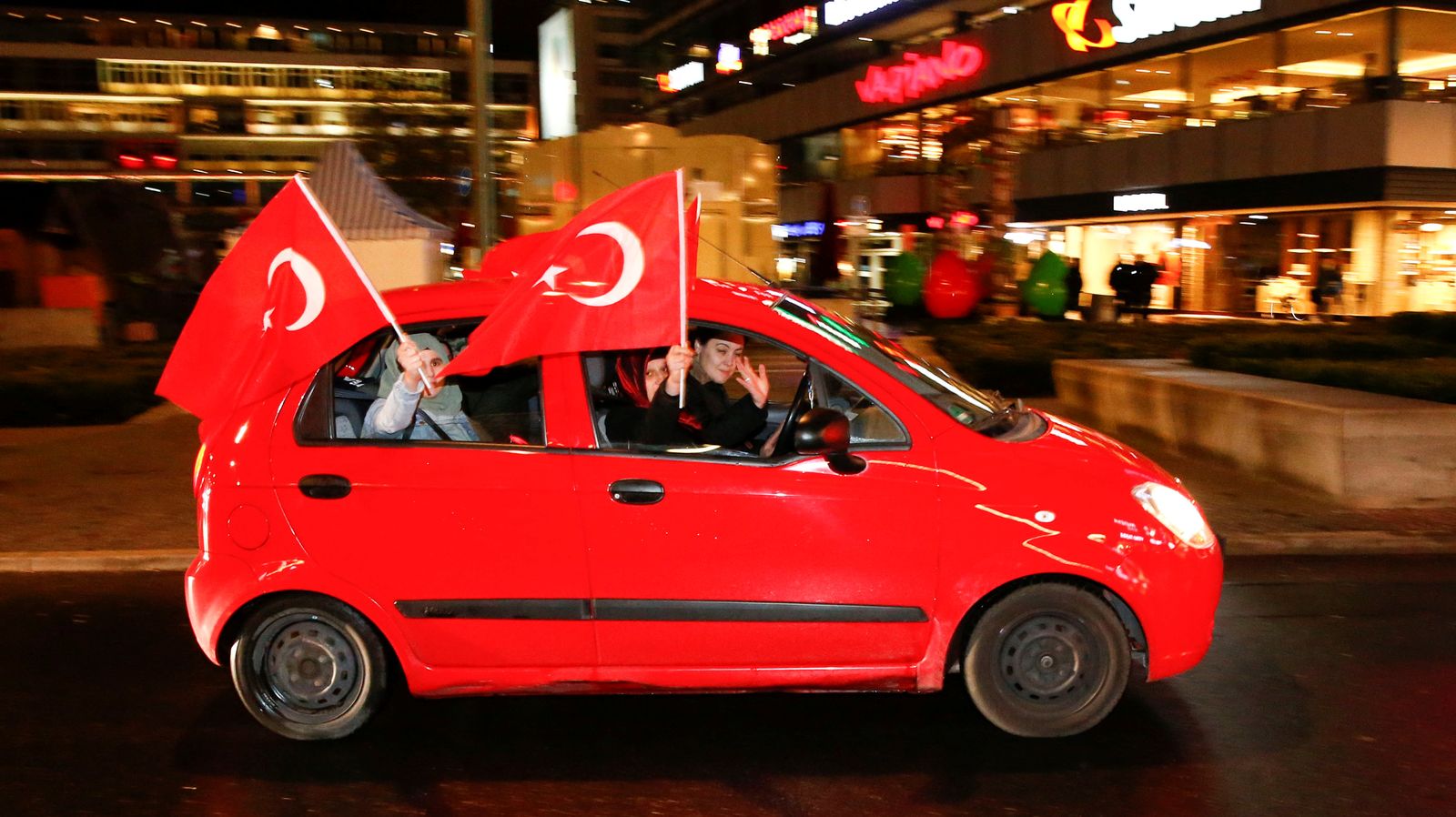