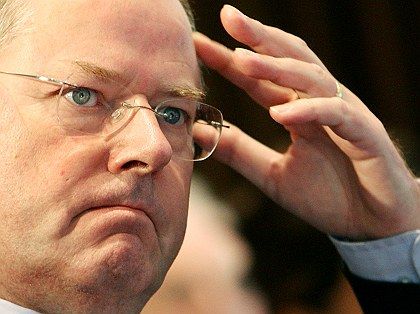 For years, Germany has been insisting that its budget would be balanced by 2011. Finance Minister Peer Steinbrück these days is showing that he means it.

As efforts to agree on a 2009 budget have progressed, Steinbrück's displeasure at budgetary requests sent in by a number of ministries has become increasingly apparent. The demands, according to a March report in the business daily Handelsblatt, exceed the Finance Ministry's plans by €7.5 billion. By 2012, the excesses could add up to a total of €40 billion.

In response, Steinbrück returned the budgetary requests to the ministries involved -- Interior, Economics, Education and Research, Economic Cooperation and Development, Transport and Foreign -- asking for pared down requests. Now, with only the Interior Ministry and the Foreign Ministry responding, Steinbrück is unwilling to further negotiate with the other four ministries, according to a Thursday report in the Munich daily Süddeutsche Zeitung. He is even considering assigning the recalcitrant ministries a budget without further talks -- a move that would be a first in Germany's history.

Despite higher tax revenues in the last two years, Steinbrück has remained focused on running a tight ship in his efforts to balance the country's budget. From 2002 to 2005, Berlin was in violation of euro-zone rules that stipulate a country's budget deficit is not to exceed 3 percent of gross domestic product. But in 2006, with the German economy beginning to pick up, its deficit fell back to just 1.7 percent.

The governing coalition, which pairs Chancellor Angela Merkel's Christian Democrats (CDU) with Steinbrück's Social Democrats (SPD), continued its march toward a balanced budget anyway. And Steinbrück has made that coalition goal his raison d' etre. Indeed, he has spent recent years of rising tax revenues valiantly fending off requests for more money.

His quest has not been universally popular. Particularly on the left, calls for him to loosen up the purse strings have mounted. Indeed, the gigantic public sector union Ver.di released a long report in December -- under the title "Tax Revenues Are Flowing In -- We've Saved Enough" -- arguing it is time for the Finance Ministry to make more funds available.

SPD head Kurt Beck on Thursday was reserved when commenting on the brewing budgetary battle. The finance minister, he said, "has the duty to make sure our goals are met." When it comes to a balanced budget, Beck said, "we are absolutely of the same opinion."

CDU budget expert Steffen Kampeter was even more supportive, saying that Germany's conservatives "support the finance minister in his efforts to draft a 2009 budget in line with the goal of a balanced budget in 2011."

But others are far from pleased with Steinbrück's approach. "I am surprised at the reaction of my esteemed colleague Steinbrück," said Minister of Education and Research Annette Schavan (CDU) on Thursday. "I think his reaction is excessive and his tone is inappropriate. It will definitely be a topic at the next budget negotiations."

Many of the ministers complain that the higher budget requests come due to expensive projects already agreed to by Merkel's government. Schavan pointed to an agreement increasing the amount of government money made available to university students -- a hike that must now be paid for. The next budget committee meeting is scheduled for the end of April.