There had been some jitters in Berlin that the bill might not go through -- but in the end Chancellor Angela Merkel's governing coalition had more than enough parliamentary votes to approve Germany's share of the massive €750 billion ($1 trillion) rescue deal to save the euro.

Merkel's conservative Christian Democrats and her partners from the pro-business Free Democrats (FDP) succeeded in pushing the bill through the lower house of parliament, the Bundestag, despite some renegades in their ranks. The final tally was 319 in favor of the bill, 73 against and 195 abstentions. Germany's upper legislative chamber, the Bundesrat, also passed the bill, which now awaits the signature of President Horst Köhler before becoming law.

The Social Democrats (SPD) and the Green Party had decided to abstain from the vote, while the hard-left Left Party opposed the rescue package. While the Greens objected to the speed with which the bill was being pushed through parliament, the Social Democrats abstained on the grounds that the government's undertakings to seek a tax on financial markets were not specific enough.

SPD leader Sigmar Gabriel attacked the government for its handling of the euro crisis. "You have no line, no aim and you don't know where you are taking this country or Europe," he said during floor debate in comments directed at Merkel.

A senior member of the SPD, Thomas Opermann, attacked Merkel for not moving fast enough to regulate markets, which many blame for worsening both the current sovereign debt crisis in Europe and the banking crisis. "It is noticeable that we move at different speeds depending on whether it's about saving banks or calming nervous financial markets, or whether it's about defending citizens against these financial markets by regulating," he said.

Finance Minister Wolfgang Schäuble welcomed the approval of the package, which the government has had to defend in the face of public anger. "We are not doing this out of generosity toward others," he told lawmakers on Friday. "We are doing this in our own best national interest."

Europe's biggest economy will now contribute between €123 billion and €147.6 billion in loan guarantees for the euro zone, in addition to the previously approved contribution to the bailout for Greece. Germany's contribution of that €110 billion package is €22.4 billion.

Many Germans are resentful of having to bail out weaker euro-zone countries like Greece and there are concerns that the rescue deal will simply cause a huge budget deficit at home. Earlier this month voters in North Rhine-Westphalia punished the ruling coalition in a state election there, partially in frustration with Merkel's handling of the crisis.

Later on Friday European finance ministers gathered in Brussels for a task force meeting to help support the euro, which has come under huge pressure amid worries about soaring public debt in the euro zone. The ministers will begin to thrash out tighter budget rules and sanctions against those who repeatedly flaunt rules against bloated national debts. Germany is suggesting that all countries be legally required to limit their deficits to 3 percent of GDP as part of a tough package which could include persistent offenders being ejected from the euro zone.

There will be deep concern in many European capitals at the prospect that any new measures would require amending the EU treaty, triggering parliament votes and even referendums, something that raises the specter of the tribulations of the Lisbon Treaty. EU officials are pushing for far less ambitious measures that would not require any tinkering with the treaty.

The new British Finance Minister George Osborne is certain to oppose any moves to have European ministers discuss budgets before they go before national parliaments. "National parliaments have to be sovereign," he said before leaving for Brussels. "They have to be the first people told about the important tax and spending decisions."

Meanwhile British Prime Minister David Cameron was in Berlin on Friday to hold talks with Merkel, a day after visting President Nicolas Sarkozy in Paris. He told the chancellor that the UK needed a stable euro currency, although he would not agree to any changes to the EU treaty that drew Britain further into supporting the currency.

Germany caused market mayhem earlier this week by acting alone in banning so-called naked short selling and naked credit default swaps, much to the chagrin of its euro-zone partners, particularly the French.

Cameron voiced his admiration for Merkel's "determination and leadership" and said that he was sure his future relationship with Berlin would be "a very strong and positive partnership." 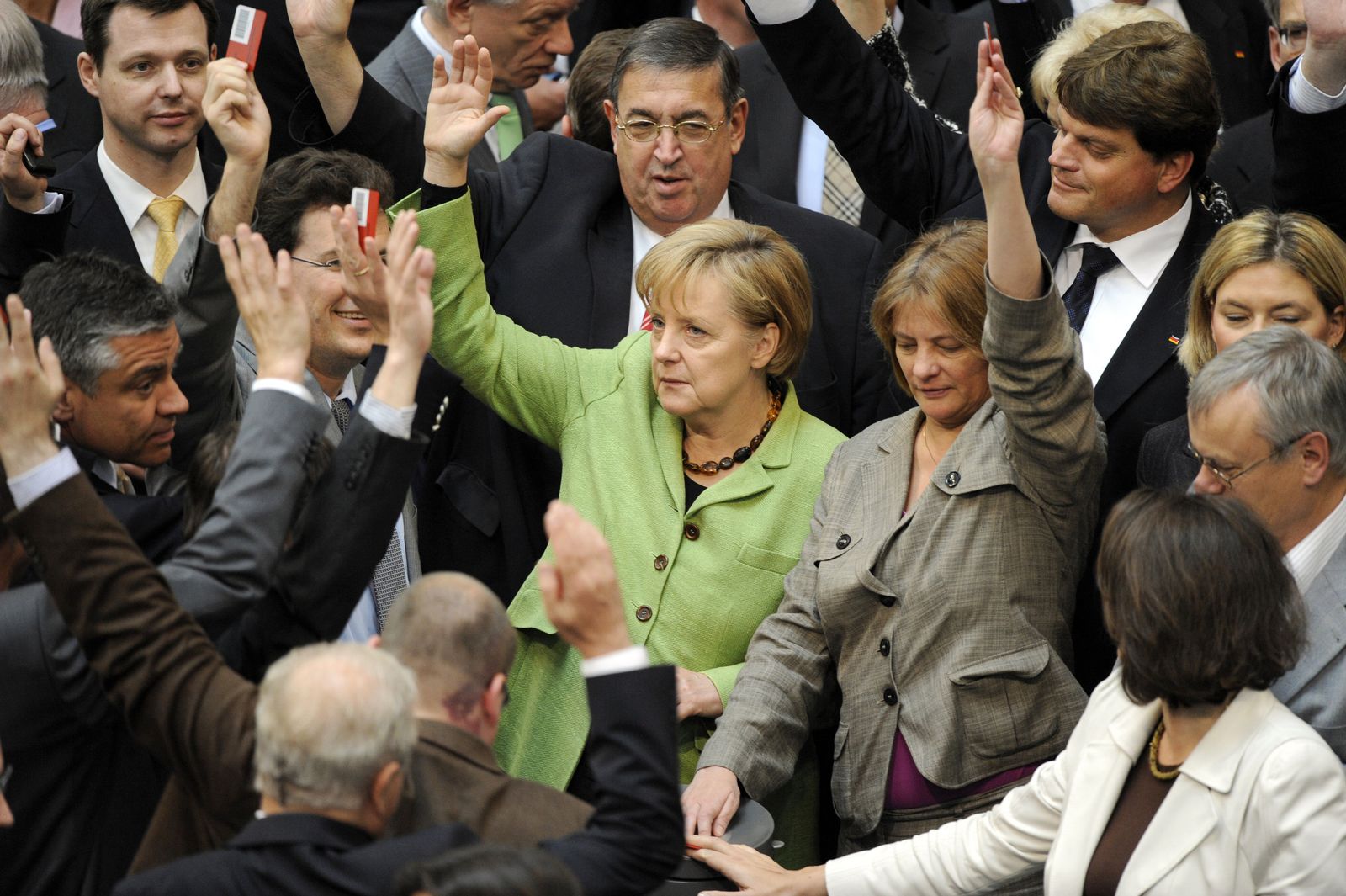