It was at Kottbusser Tor, in the heart of the Berlin district of Kreuzberg, that Ali Cengiz witnessed the horror. Behind a food-stall counter, he spied a tower of burger buns, all crammed into a narrow plastic bag. "If they sit there sweating next to the grill all day," Cengiz said with disgust, "the burger is going to taste bland." The fact that the patties are industrially produced and frozen, he added, makes it even worse.

Forty-eight years old, Cengiz is actually the head of a tax consultancy. But with many of his clients working in gastronomy, he found himself drawn to the business. Today, he owns five burger restaurants in Berlin.

Joining him for a tour of hamburger joints in Kreuzberg is instructive, as he points out what separates a good one from a bad one. Garish photos of the dishes on offer at the entrace do not bode well, Cengiz says. And the use of cocktail sauce on burgers is a definite "no go".

"Most of our competitors simply don't understand the essence of burgers," he says. "If you go there and tell the servers that you need to cut the stem out of the tomato, they'll say: 'It doesn't matter.' But it does matter!"

At Schiller Burger, as Cengiz calls his mini-empire in honor of the famous German poet Friedrich Schiller, staff mix the sauces themselves and the buns come from the chain's own bakery. Not surprisingly, the burgers cost up to €7 ($8.82), far more than a McDonald's offering.

Cengiz has been careful to design his restaurants according to the dictates of hipster Berlin, with exposed-brick walls and wooden furniture. Burgers ordered to-go are wrapped in paper printed with Schiller quotes and the concoctions themselves are named after important Schiller works, such as "Wallenstein" or "Maria Stuart." This year, Cengiz is planning on opening two more branches in Berlin and hopes to ultimately expand across the country, though he is still searching for an investor.

He faces stiff competition. New burger joints are popping up in cities across Germany these days, though Cengiz carefully avoided the naming pitfalls that many of them have fallen into. With the German word "Bürger" meaning "citizen," the amount of burger-joint puns has rapidly become unbearable.

Still, most of them seem united in an effort to improve the burger's rather tawdry reputation in Germany. Some restaurants advertise the quality of their ingredients, many of them offering Angus beef. Others emphasize their imaginative creations, with "goat cheese and fig sauce," for example. While certainly not going after the health-food segment, the new slew of restaurants is certainly making them more appealing than your average fast-food meal.

"Customers in these restaurants mostly grew up with McDonald's and Co. and they still like to eat burgers as adults. But they have become more discerning," says Sandra Warden of the German Hotel and Restaurant Association. Indeed, organic beef is popular among the new burger joints and, so as not to scare away vegetarian patrons, many of them have offerings such as spelt patties or red-beet burgers.

The growth of the boutique burger industry in Germany has put the established chains under pressure. McDonald's, for example, saw sales drop in the country in 2013 and company headquarters believes 2014 numbers in Germany will also reflect an "ongoing weakness." But a spokesperson said the sales figures are not solely a function of the new competition. Still, he said, "we of course have to continually prove our burger expertise."

Restaurateur and chef Thomas Hirschberger was one of the first to base his business model on the gourmet burger trend. In 2010 in Munich, he opened the first restaurant in what has become a 26-branch chain. Called Hans im Glück, Hirschberger intends to more than double the number of restaurants by the end of next year. The majority of the outlets are franchises, but Hirschberger's expansion is also being partly financed by Erdinger, a major German brewery, among other investors.

Hans im Glück makes it seem as though burgers -- synonymous with American cuisine -- are an ancient German tradition. Their names exude a kind-of Teutonic pastoral sensibility and the tables stand among an artificial birch forest of the kind found across the country. Ingredients are primarily sourced locally, though Hirschberger has stopped emphasizing that fact. "We were flooded with detailed questions," he says. "Our guests wanted to know everything, right down to the name of the cow."

On a recent Saturday afternoon, the trend toward chic burgers was on full display in the courtyard of the Prince Charles club in Kreuzberg. Hipsters in their 20s, clad in wool caps and sneakers, were crowding around food stands and the smell of grilled meat was in the air. The event was part of the "Burgers & Hip Hop" series, established to crown the best burger in Berlin. Each time, thousands of people show up to eat their fill before disappearing into the club for a night of partying.

At the entrance to the courtyard, a Swiss burger purveyor is offering a distinctly Alpine flavored concoction made of thinly sliced beef, Swiss-style hash-browns and melted raclette cheese. It is heavy, but delicious. A long line snakes away from the stand's counter and those at the end will have to wait an hour to be served.

McDonald's, too, has now realized that the trend toward quality isn't going away anytime soon. Recently, the company began testing a new premium burger in its German restaurants. 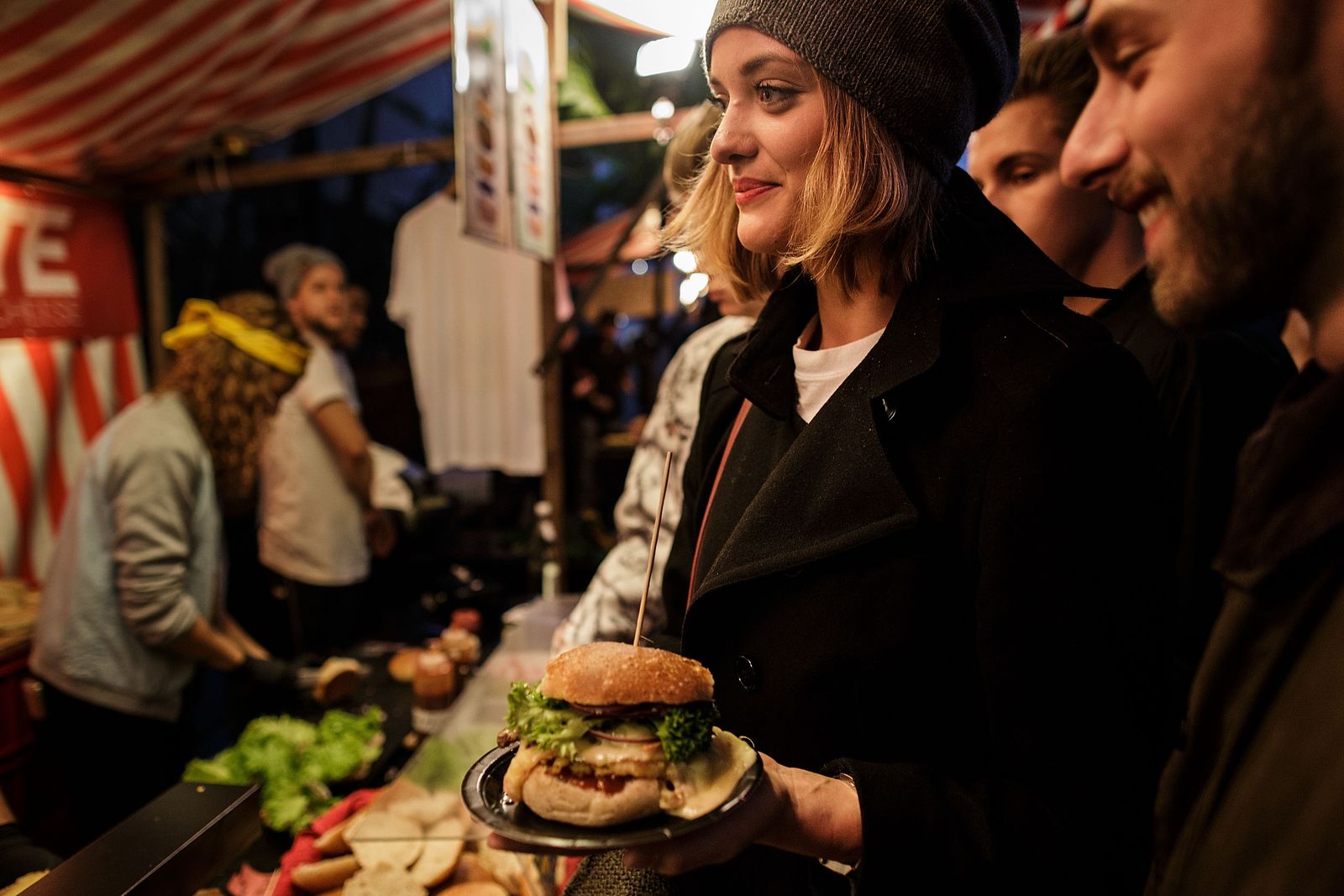 A visitor at "Burgers & Hip Hop" in Berlin. Good burgers are now all the rage in Germany.