Germany's highly anticipated "burqini ruling" is out. The federal administrative court in Leipzig, the highest in the country for such issues, ruled on Wednesday that schools can demand that Muslim school girls participate in co-ed swimming classes. The court stated that in order to respect their religious dress codes, girls are allowed to wear a full-body bathing suit known as a "burqini."

The ruling sparks the end of a legal challenge by Aisha, a 13-year-old girl from a high school in Frankfurt. The parents of the girl, who is of Moroccan origin, had sought to have their daughter exempted from a co-ed swimming class at the school. They argued that mixing girls and boys in swimming courses could not be reconciled with Muslim dress codes. Two years ago, however, the high school refused to exempt the girl.

In a first ruling in the case, an administrative court in Kassel in the state of Hesse affirmed the school's refusal to exempt her from the swimming class and rejected the case, arguing that it was okay to order the girl to participate in the class wearing a burqini. At issue in the current appeal was a fundamental decision between the individual's constitutional right to freedom of religion and the state's constitutional obligation to educate all children.

No Right To Avoid Seeing Boys in Swim Trunks

The girl at the center of the case had attended school in Morocco until she turned eight. Later, she earned good grades at school in Germany and was accepted into one of the country's university-track high schools. After the school rejected her exemption from the swimming class, she simply stopped attending it. This caused her to flunk physical education on her half-year report card. But she managed to get the lowest possible passing grade on her final report card by attending normal gym classes, nearly completely covered from head to toe in a pair of long pants, a shirt with long sleeves and a headscarf.

The federal administrative court in Leipzig also rejected arguments that a girl should not be exposed to male students in swimming suits during gym class for religious reasons. The judges said she had no other choice but to be in the same place with them because, "The constitutional right to freedom of religion does not convey any fundamental right in the context of school to not be confronted by the behavioral patterns of third parties, including those relating to the area of clothing, items that are part of everyday life outside of school and in many places, particularly during certain times of the year."

In Germany, a country that is home to around 4 million Muslims, it is becoming an increasingly more common sight to see Muslim girls wearing burqinis at school and public swimming pools. With the exception of the face, hands and feet, the bathing suit covers the entire body and also includes an integrated headscarf. Although burqinis resemble diving suits, they are actually comprised of several pieces with generously cut cloth, guaranteeing that, even when wet, the material doesn't stick to the skin to reveal a girl or woman's curves. 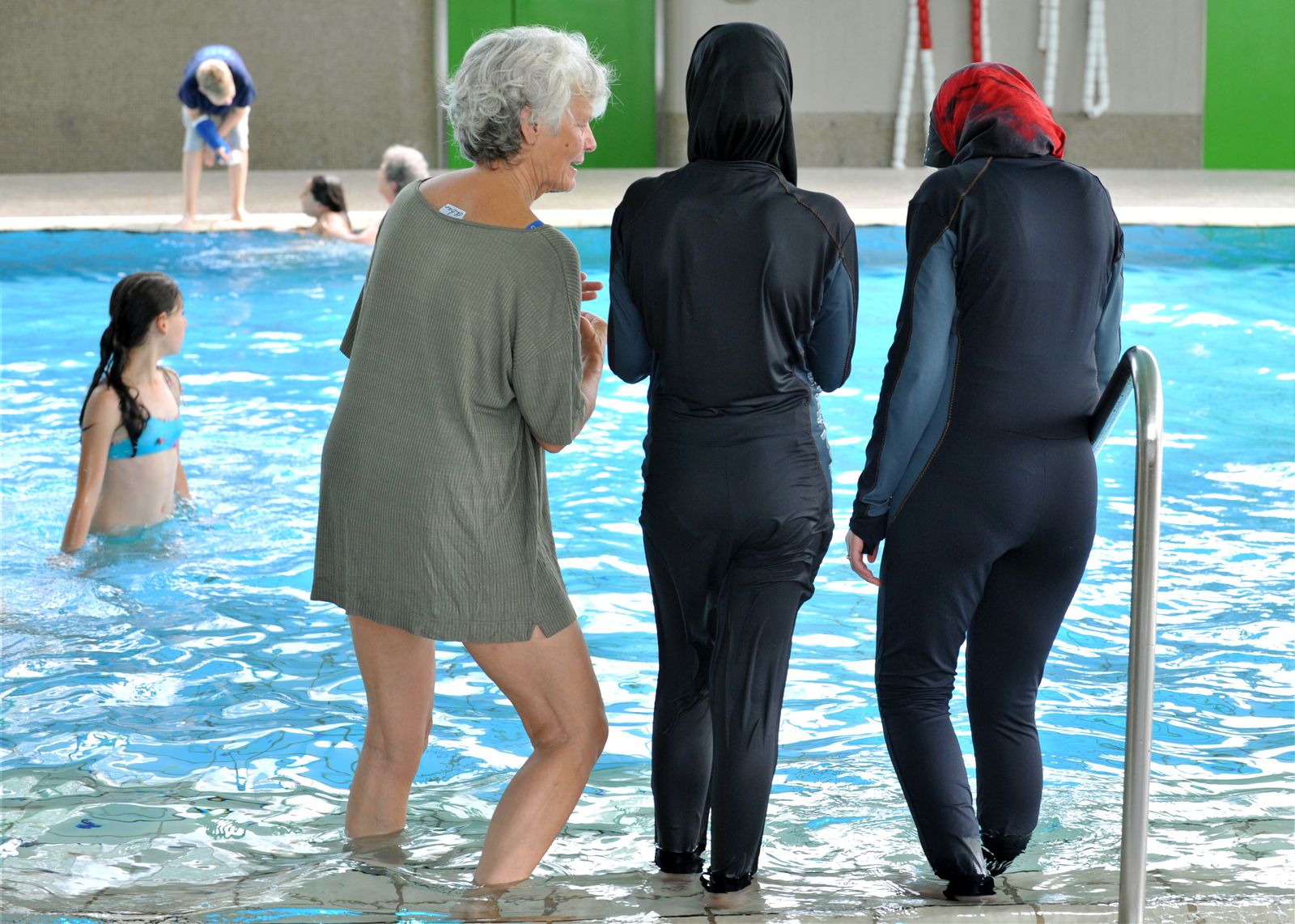 Muslim girls can be seen wearing burqinis at a swimming pool in Freiburg, Germany.