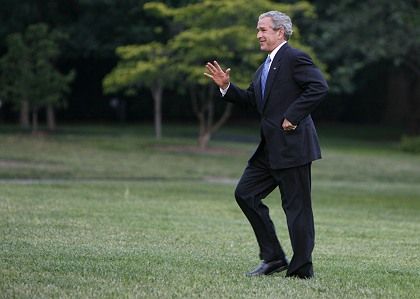 Going his own way on climate change: "The US's new, so-called 'climate strategy' is really just a strategy for hindering climate protection."

United States President George W. Bush has expressed confidence that Angela Merkel will warm to the plan he announced on Thursday to battle climate change, but in Berlin, the German chancellor's top G-8 negotiator is preparing for the strong possibility that negotiations over binding emissions targets among G-8 member countries could collapse at Heiligendamm.

In an interview with the Frankfurter Allgemeine Zeitung newspaper, which will hit the newsstands on Saturday, Bush said he was confident that Merkel would endorse his drive to combat climate change. Bush also rejected speculation that the climate change negotiations in the run-up to next week's G-8 summit in German Baltic Sea resort had driven a wedge between US-German relations.

The comments in the interview came one day after Bush presented his new strategy for battling climate change. The US wants to initiate a series of meetings between the biggest industrialized countries and the developing nations with the greatest economic growth and increases in climate change-causing carbon dioxide emissions, led by China and India.

The Bush administration's official line is that new technologies, and not mandatory emissions curbs, will play the decisive role in reducing greenhouse gases. The president also indirectly criticized Germany's 2000 decision to phase out nuclear energy in the country by 2021. Under its coalition agreement with its junior government partner, the center-left Social Democrats, Angela Merkel's conservative Christian Democrats have agreed to maintain the phaseout policy. "If you're truly interested in cleaning up the environment, or interested in renewable sources of energy," Bush said, taking a jab at Germany, "the best way to do so is through safe nuclear power."

But Merkel isn't as pleased with Bush's proposal as he might like to think. She greeted the proposal but stressed that there was still much work to be done so that concrete formulations could be made at Heiligendamm. "What is very important for me, for us (the European Union) is that the whole process be overseen by the United Nations," Merkel said. "I absolutely see movement on the issue." Nobody, she said, can get around the fact that climate change is a reality and that it is being caused by human activity.

European Commission President Jose Manuel Barroso, however, offered clear criticism of Bush, who negotiators are refusing to back Merkel's calls for binding emissions cuts. "The US has a special responsibility as a large emitter of pollutants," Barroso said. "It's clear that we need a more ambitious position from the USA." Barroso, who will be taking part in the summit at Heiligendamm, also defended Europe's calls for binding emissions cuts. "The USA is putting its emphasis on market mechanisms in the battle against climate change -- and justifiably so," he added. "But market mechanisms can only function if there are binding targets."

In light of the current US position, Barroso said he didn't expect there would be an agreement on any concrete climate protection guidelines at Heiligendamm. "But I hope the USA will see the meeting as an opportunity for the G-8 summit to make a contribution to the UN's multilateral climate protection system." He said the summit must be used as a starting point for the next round of UN climate protection negotiations to be held at the end of 2007 in Bali -- negotiations aimed at finding a successor agreement to the Kyoto Protocols, which expires in 2012. Barroso also said that the Bush administration's current position will have little future support -- even in the US.

Jürgen Trittin, who heads the German Green Party in parliament, also took a strong stance against Bush's initiative. "The US's new, so-called 'climate strategy' is really just a strategy for hindering climate protection," Trittin told SPIEGEL ONLINE. Without the participation of the countries most affected by climate change, Bush just wants to "sit down together with the biggest polluters, in order to delay any binding emissions reductions targets for as long as possible."

Meanwhile, German Environment Minister Sigmar Gabriel of the Social Democrats warned in the Braunschweiger Zeitung newspaper that Germany "shouldn't be taken in by this kind of Trojan horse." Washington hasn't set any clear targets or suggested any binding commitments. And in an interview with the Berliner Zeitung, he stated that Bush's proposal cannot be a substitute for negotiations within the framework of the UN.

However, British Prime Minister Tony Blair has welcomed Bush's plan, calling it "a huge step forward." For the first time, Blair told Sky News, "America's saying it wants to be part of a global deal." Blair called for efforts to be made to reach a new international agreement at a climate summit later this year. He said it is imperative that the US as well as China and India be integrated into negotiations.