Germany's nascent nuclear renaissance is going commercial. Earlier this week, on the same day that police clashed with thousands of protesters trying to block a delivery of nuclear waste headed for a radioactive dump near the northern German town of Gorleben, a power company released a new energy product designed to capture the business of what it claims is a growing community of pro-nuclear consumers. 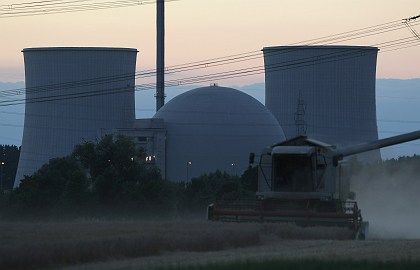 German consumers of electricity will now be able to choose a "Pro-Climate" package heavy on atomic energy.

"Pro-Climate Power" is the name of the new electricity service available from RWE, one of Europe's largest electricity providers and based in the western German town of Essen. The service provides consumers with an electricity cocktail that derives 68 percent of its power from nuclear sources and 32 percent from hydroelectric energy sources. Although the plan is slightly more expensive than traditional packages, RWE is betting that consumers concerned about global warming will be willing to spend a little more to shrink their carbon footprint.

Back in 2000, when Germany was governed by ex-chancellor Gerhard Schröder's coalition of Social Democrats and Greens, the government pledged to phase out the country's nuclear reactors. Some have already been shut down, and the final reactor is scheduled to go off line in 15 years. Recently, though, a number of politicians in Germany, many of them from Chancellor Angela Merkel's Christian Democratic Union (CDU), have said they want to slow down the phase-out. Power industry lobbyists, in particular, would like to see reactor lifetimes extended because, once the costs of construction are paid off, nuclear power plants can generate huge profits.

But it's not just lobbying efforts that are pushing many to rethink nuclear power. In the eight years since the phase-out became law, energy prices have skyrocketed as rising economies like China and India has shown an ever-expanding appetite for electricity. And although energy prices right now are well off their summer highs, that's due in large part to the global financial crisis, which threatens to plunge the world into the most serious economic down-turn since the Great Depression.

On the environmental front, rising CO2 emissions have stoked concern about global warming. Some see nuclear power as a possible interim solution to allow the phase-out of coal-fired power plants before renewable energies have developed far enough to meet energy demands. Suddenly, the politics of nuclear power have changed, even in Germany, whose citizens ranks among the greenest in the world.

A poll released on Friday conducted by German broadcaster ARD shows that only 51 percent of Germans now support the country's legislated nuclear phase-out. That's down from 61 percent back in the summer of 2000.

"People are accepting nuclear energy," RWE spokesman Sebastian Ackermann told SPIEGEL ONLINE. "While we can understand that some oppose it, a huge demand exists for the clean, low-cost energy that comes from nuclear power."

Whether nuclear power is really "clean" is subjective. Many point to the fact that, when one takes the entire life cycle of a reactor into account -- along with the energy expended to mine, process and transport uranium -- nuclear energy is not really carbon-free. Furthermore, although RWE's "Pro-Climate Power" option emits only a minimal amount of CO2, it does result in the production of .0018 grams of nuclear waste per kilowatt-hour. The average energy package in Germany, by contrast, produces only .0008 grams of nuclear waste, but a full 520 grams of CO2 per kilowatt hour. Still, some consider any nuclear waste to be too much.

"RWE's offer is bold-faced consumer fraud," Andree Böhling, an energy expert with Greenpeace Germany, told SPIEGEL ONLINE. "'Pro-Climate' is just a label. The product is in no way ecological. It does nothing to help the environment." Mr. Böhling, who considers RWE's plan more a marketing ploy than anything else, finds it especially ridiculous that the service costs more than Greenpeace Energy's own "eco-energy" option, which is 100 percent based on renewable sources.

Ackermann, speaking for RWE, doesn't deny that "Pro-Climate Power" is slightly more expensive. Indeed, like Greenpeace Energy, RWE also offers a cheaper "eco-energy" plan based 100 percent on renewable sources. What makes "Pro-Climate Power" potentially worth the extra expense is that its price is frozen for the next three years. In this way, the plan appeals not only to those concerned about climate change, but also to those worried about a spike in energy prices.

"Electricity prices are going to go up," says Ackermann. "We don't like to say this, but it's true." By enrolling in "Pro-Climate Power," consumers can insulate themselves from the volatility of the electricity market for at least three years.

RWE denies that it deliberately unveiled its plan at a time that would coincide with massive anti-nuclear protests. The protests in Gorleben, which spilled from the weekend into Monday and Tuesday, included over 15,000 people.

"We know this is a polarising issue," says Ackermann, "but it was certainly not our intention to provoke. We would have preferred to release (the plan) under other circumstances." Ackermann stressed that the company "respects everyone's opinion," but added that RWE "stands by its product."

The company might find this stance increasingly difficult to maintain. At a press conference at the beginning of the week, Green Party co-leader Reinhard Bütikofer lashed out at RWE, suggesting they were failing to see the writing on the wall. "RWE's position is not as strong as they believe. If they want to become the favorite bogeyman for all of the country's energy progressives, then let them do it. But then they're also going to have to deal with the repercussions."

Whether an anti-RWE backlash will actually materialize remains to be seen. Greenpeace hasn't planned any anti-RWE protests as yet. Still, in what has undeniably been a tumultuous year for nuclear policy in Germany, any plan based on atomic energy carries risks. As Bütikofer put it at the Green Party press conference, "Everybody is talking about a nuclear renaissance, but what we saw over the weekend is the renaissance of anti-nuclear resistance."