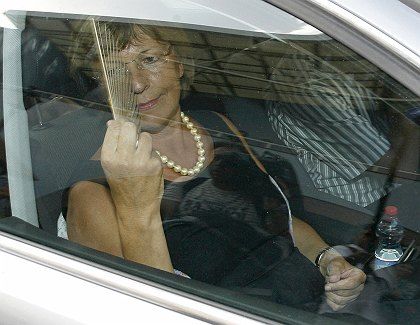 German Health Minister Ulla Schmidt's work car has been located by Spanish police, but she is still facing sharp criticism back home in the affair.

Schmidt came in for heavy criticism after it emerged this week that she had her official car, an armored Mercedes S class, driven nearly 2,000 kilometers in order to have it at her disposal while on vacation in Spain.

Schmidt's spokeswoman said the minister needed the limousine to attend official functions in Spain, and that the minister didn't break any rules. All German cabinet ministers are entitled to a limousine and driver for official and private use, provided they cover the costs of private use themselves.

But when the car was stolen last week from the Spanish resort of Denia, some 80 kilometers north of Alicante, the case became a public relations debacle. On Wednesday, further details of the theft emerged. It turns out Schmidt's driver was drugged by thieves on the night the car was stolen. "Evidence suggests that the perpetrators pried open a ventilation duct and drugged the driver in order to enter the room and take the keys to the car and his personal belongings," Health Ministry official Klaus Theo Schröder said in a report on the incident.

According to German police, the car, worth about €100,000 ($140,000) was recovered in Spain on Tuesday evening. The theft has prompted uncomfortable questions about why Schmidt needed her limousine during her vacation, especially since the German embassy in Madrid could presumably have arranged transport for her official engagements there. She flew to Spain while her chauffeur drove all the way from Germany to the Costa Blanca, a popular tourist destination on Spain's Mediterranean coast.

Media commentators and opposition politicians accused her of wasting taxpayers' money -- an especially damaging allegation at a time of economic crisis, and bad for her SPD partytwo months before the general election. The latest polls show Frank-Walter Steinmeier, the SPD's designated candidate for chancellor, at an all-time low in the public opinion polls. According to a weekly survey by German research institute, Forsa, only 17 percent of the electorate say that they would vote for him if the choice was between him and current chancellor Angela Merkel. Meanwhile Merkel's popularity has continued to grow, climbing two points to a high of 58 percent.

There have been calls for Schmidt's resignation. The German Taxpayer's Association, a non-profit watchdog group, has demanded a full accounting of costs incurred. According to their estimates, the health minister's vacation cost taxpayers more than €10,000 euro. "The minister is explaining things bit by bit, and each time things look worse and worse for her," said association head Rainer Holznagel.

Schmidt's own party was standing by her, though. "This is an upstanding woman, and I'm sure she'll make it through this," party head Franz Müntefering told reporters at an SPD rally in Hanover on Tuesday.