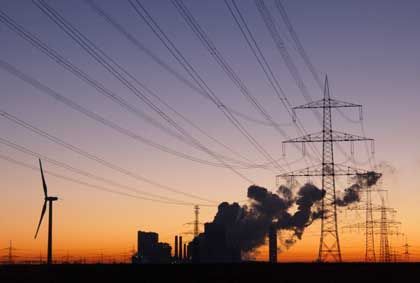 The environment certainly seems to be in safe hands at the German chancellery in central Berlin, located next to the leafy Tiergarten park. Global warming and climate change is German Chancellor Angela Merkel's current favorite topic.

"The situation is threatening. There are fewer and fewer glaciers in the mountains. Storms are getting stronger," she lectures one audience. "We have to change course now," is another typical statement.

But it's a different story just a few kilometers away in a decrepit industrial park in the eastern Berlin neighborhood of Lichtenberg. There, energy provider Vattenfall is planning a project that hardly seems compatible with Merkel's grand plans for saving the climate.

The company wants to build a new coal-fired power plant there by 2012. The plan is for the new plant to burn up two million tons of Polish coal a year and provide a solid 800 megawatt electricity output, in addition to 600 megawatts of heat.

That's nice for Vattenfall, but less so for the climate. The power plant will also churn out a good five million tons of CO2 every year, according to preliminary estimates -- and it will do so right under the nose of Angela Merkel.

The chancellor is caught in the climate trap. She's presenting herself as the world's most active climate protector, both on the international stage and back home. Acting as European Council president at a summit the week before last, she won a commitment from all 27 member countries to implement a 20 percent reduction of greenhouse gases by 2020 compared to 1990 levels. Germany alone will reduce its CO2 emissions by 40 percent, if the government has its way. British Prime Minister Tony Blair has set a record by announcing a 60 percent decrease.

Experts at Berlin's Environment Ministry have now determined 20 problem areas where the government is either already active or plans to become active in the future. The transition to a motor vehicle tax that takes account of CO2 emissions is one of these problem areas, as are programs for the refurbishment of buildings and a new energy-saving directive. Next month, Environment Minister Sigmar Gabriel wants to present his plans in a government statement provisionally titled "Climate Protection Agenda 2020." Merkel is planning to present an overall model that builds on Gabriel's statement before the end of the year.

It all sounds good. But no one knows whether it will really be enough. Moreover, one of the greatest climate-related problems -- the current boom in the construction of new coal-fired power plants -- has only been addressed vaguely or in a half-hearted manner by the people involved. The Vattenfall project in Berlin is only one example of a larger trend. Utility companies want to set up a total of 26 new coal-fired power plants in Germany during the coming years.

In the long term, the power plants will replace older, dirtier plants. But that doesn't alter the fact that the plans are a direct contradiction of the climate goals formulated by Merkel. While emissions are practically zero in the case of nuclear energy, and while a natural gas-fired plant produces just 428 grams of CO2 emissions per kilowatt hour, a black coal power plant churns a solid 949 grams of CO2 into the atmosphere. The figure for lignite or brown coal -- 1,153 grams -- is even worse. 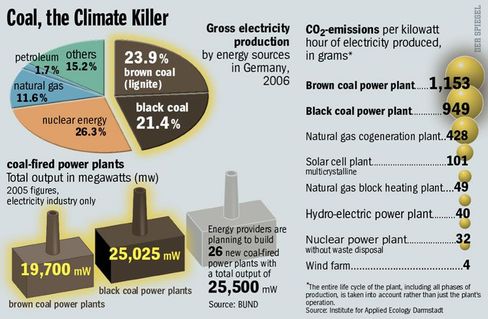 Coal -- great for politicians, bad for the environment.

Estimates by climate protection experts such as Rainer Baake from German Environment Aid (DUH) suggest the new power plants will release at least 150 million tons of CO2 every year. Their output corresponds to only "about a fifth of the output of the power plants currently in place in Germany, but their carbon dioxide output is equal to more than half of the pollutant output allowance granted all power plants for the 2008-2012 period," says Baake, who was junior environment minister under Germany's previous coalition government between the Social Democrats (SPD) and the Green Party.

Experts at the Federal Environment Agency warn of the threat of future mega-emissions. Researchers there recently published a study entitled "Climate Protection and Investment Plans in the Power Plant Sector," in which they demonstrate that the replacement of old power plants by new coal-fired power plants may well result in a decrease in the output of greenhouse gases, but, realistically speaking, the decline will only be 14 percent. At that rate it will be difficult to reach Merkel's declared goal of lowering emissions in Germany by 40 percent compared to 1990 levels.

But the new plants are a big business opportunity for Germany's four major energy providers, Vattenfall, RWE, E.on and EnBW. Coal imports from South Africa or Poland are relatively cheap and can be used to produce electricity and heat at a high profit. In this way, the companies intend to secure their dominant position on the German market for decades to come.

And German politicians are explicitly encouraging them to do so. Both Merkel and Gabriel have an interest in the power plant construction boom.

For Merkel, the case is clear-cut: New power plants will secure thousands of jobs in Germany. The projects resemble a giant program for the stimulation of the economy. The power plant operators plan to invest more than €30 billion ($40 billion) in construction and infrastructure.

Jobs are also a strong motivation for Gabriel and the SPD. Workers in the energy sector, who are members of the powerful trade unions for mining, chemistry, energy and services, are traditionally SPD voters. The party doesn't want to make political decisions that hurt their interests. Energy security is another argument Gabriel and his colleagues like to invoke: Germany must not become dependent on Russian natural gas, they say.

But something else is even more important for the Social Democrats. They want the planned power plants to help bridge the electricity gap that will inevitably arise in coming years due to the phasing out of nuclear energy. Germany's previous governing coalition between the SPD and the Green Party decided in 2001 that Germany would abandon nuclear energy -- and Gabriel and his colleagues will not allow the decision to be reversed. If the SPD were to question the construction of new coal-fired power plants, it would inevitably have to rethink its schedule for closing down Germany's nuclear power plants.

And so German energy companies can plan and construct their new high-emission facilities with the support of politicians. Giant plants are to be built across Germany, from North Rhine-Westphalia, the Saarland, Hesse and Schleswig-Holstein to Baden-Württemberg.

A total of 12 plants are being planned or built in North Rhine-Westphalia alone. If they were all to be connected to the electricity grid, they would produce an annual 68 million tons of emissions, according to calculations by North Rhine-Westphalia's Green Party -- more than Switzerland's total annual emissions.

The coal business is also booming in former East Germany, where brown coal or lignite is traditionally extracted in open pit mines. Saxony-Anhalt alone is thought to have reserves in the order of 10.9 billion tons. Merkel has explicitly encouraged energy companies to invest in coal-burning: "Germany has considerable natural resources in the form of brown coal which we shouldn't downplay," she told an audience of businesspeople last year.

This kind of enthusiasm for brown coal isn't to be found everywhere. Opposition to the prospective power plant sites is gradually taking shape. Non-partisan coalitions have already organized protests within town councils in the states of North Rhine-Westphalia and Hesse. The opposition in Berlin is being spearheaded by a Merkel confidant, of all people: Friedbert Pflüger, the head of the Christian Democratic faction in the Berlin state parliament.

But there isn't much local politicians can do to stop construction of the new power plants. By German law, the authorities normally have no choice but to authorize the construction of any new power plant that meets the legally prescribed standards. It would only be possible to change this procedure quickly if the governing coalition were to change the law at the federal level.

Merkel and Gabriel seem confident that in the end, it will all fit together somehow: the new power plants, securing jobs and climate protection goals. The future will sort everything out, they hope.

Merkel also likes to talk about clean coal. But unlike Gabriel, there is a second exit strategy available to her: If she wins the national elections in 2009, she could join forces with Germany's Free Democratic Party (FDP) and make the construction of numerous new coal-fired power plants superfluous -- by abandoning the plan to phase out nuclear energy.