Angela Merkel has been leader of the Christian Democratic Union (CDU) for 17 years, six months and four days, but she still knows how to surprise her party. Last Saturday she dropped by the annual congress organized by its youth wing, the Junge Union. The younger generation has long seen itself in the vanguard of the CDU's conservative faction, frequently rallying behind politicians who do not see eye to eye with Chancellor Merkel.

At the 2004 congress, Helmut Kohl was given a welcome that suggested he, rather than, Merkel was at the helm of the party ("Who is our idol? - Helmut Kohl"). A year later, the man of the hour was Friedrich Merz, her archrival at the time, who was hellbent on tax reform. This year, the standing ovations were in honor of Jens Spahn, the young state secretary at the Ministry of Finance and the man that many are hoping will spearhead a conservative U-turn within the CDU.

Not surprisingly, there was a rancorous atmosphere when Merkel took to the stage on Saturday morning to field questions from the audience. Was she willing to admit the party had suffered a bitter defeat in the election in late September? Was it not high time she began paying more attention to center-right voters?

Once again, Merkel demonstrated that she is nothing if not flexible when under pressure, and laid out her plan to woo back voters who defected to the far-right Alternative für Deutschland (AfD) on September 24. The trouble was, her plan was not even remotely what many members of her party want to hear.

In his speech the previous evening, Jens Spahn had spelled out what he sees as the reasons for the CDU's election humiliation in no uncertain terms. The elephant in the room, the issue no one dares address, in his opinion, is refugee policy. "Does anyone here seriously believe that the reason we lost 12 percent to the AfD in Baden-Württemberg is because of old-age care policy?"

The one person who does seriously believe it is Angela Merkel. She talked about the badly paid care workers for the elderly, about families who can't afford affordable housing in Germany's cities. She talked about aging men and women who spent 45 years working only to find their pensions aren't enough to live on.

"These are social issues we need to resolve," she said. "The CDU is sometimes more inclined to focus on the economy and less inclined to consider what it actually means for the individual," she added, in a small swipe at her own party. By the time Merkel left the Congress center in Dresden after about two hours, it had become eminently clear that her response to the rise of the right-wing populist AfD is to shift to the left.

If the Chancellor succeeds in cobbling together a "Jamaica Coalition" - so named because the colors associated with the parties involved (CDU black, FDP yellow and green for the Green Party) are the same as those on the Jamaican flag - she will likely make herself out to be its conscience. "A mainstream party might as well give up when it loses sight of the common man," is one of the chancellor's credos, and the priority now is to concentrate on "Christian social principles."

It would, of course, be futile to contend that Merkel made the nation knuckle down to a diet of social stringency in recent years. She approved a minimum wage, she went along with the push to reduce the retirement age to 63 and she signed off on a bill approving the so-called "mother's pension," an entitlement for older women taking into account the years they may have spent raising children. Some within the party think it's downright impossible for the CDU to shift any further to the left.

But Merkel is also aware that something's got to give. September's election, which saw the CDU receive just 32.9 percent of the vote, its worst result in over 60 years, has left too much uncertainty. But at the same time, she wants to prevent a shift to the right at all costs, even though so many are clamoring for it. It would amount to an admission that not only her refugee policy was a dire mistake but also her decision to gradually open up the CDU to center-left voters. It would leave her politically bankrupt.

Shifting to the left is her only option, and in doing so, she has an unexpected ally: Horst Seehofer, whose Christian Social Union (CSU), the CDU's Bavarian sister party, suffered an even worse setback than the CDU. Seehofer has concluded from that poor showing that reviving his dispute with Merkel over refugee policy would only boost the AfD, so he has finally put an end to the quarrel about a hard upper limit to the number of refugees Germany can accept, an issue which has dogged their relationship for the last 18 months.

"Social issues played a major role in the election," says Andreas Scheuer, secretary general of the CSU. "We will be addressing these in-depth. If you want to avoid increasing the number of protest voters then you need to look into these issues. That's something everyone needs to grasp." Seehofer last week told the CSU's parliamentary group in Bavarian state parliament in Munich that the public should not have the feeling that the state is so preoccupied with looking after refugees that there is no financial support left over for them.

Seehofer made it obvious which demographic he is thinking of - families with children, elderly people with modest pensions and normal working people who can't afford the high rents in cities like Munich. These people felt overlooked by politicians, he argued, and that needs to change.

The CDU and CSU have now added incentives worth billions to their election platforms. Their tax policy pledges alone will cost more than 20 billion euros, with 15 billion of that going to reduce income tax. They are planning to spend 15 billion euros reducing income tax and introduce additional tax and other benefits for families with children.

Further social policy spending would come on top of that total. The CDU/CSU have said, for example, that they intend to introduce a subsidy worth billions to help families build their own homes. Additional spending plans relate to hospital funding retirement home care.

Seehofer and Merkel know that the government's budget is on solid ground. Berlin is predicting growth of 2 percent next year and the year after, which has made party leaders more willing to dig into state coffers to make sure voters are happy. They remain divided on just one issue: The CSU wants to factor an extra year of child-raising into the "mother's pension" for women whose children were born before 1992. Doing so would cost a further 7 billion euros.

Seehofer told the CSU state parliamentary group in Munich that he would insist on making the adjustment, but there is strong resistance from the CDU. "I believe that bolstering the 'mother's pension' is a difficult project because of the high costs associated with it," says Karl-Josef Laumann, head of the Christian Democratic Workers' association.

The CDU is currently exploring two possible compromises. But none of them will be able to disguise the fundamental problem with the "mother's pension" - and the reason it was so controversial in the first place: It was one of the costliest policy's passed by Merkel's outgoing governing coalition, but it fails to benefit many disadvantaged women.

Seehofer has indicated that he is prepared to compromise on the "mother's pension" and has let it be known internally that there is no "red line." However, he is demanding concessions on other issues. He sees it as a mistake that before the election, the CDU/CSU failed to provide information on how pensions would develop, especially after 2030.

The CSU leader is now demanding specific information about pension levels and how contributions are likely to change. He also wants to see the state provide more support for private pension arrangements, although it remains to be seen what form this would take. Last week, Merkel and Seehofer fleshed out a time-frame for negotiations with the FDP and the Greens, and also decided who their own negotiator would be. But there was no discussion of actual issues.

The fear in the CDU is that any agreement between Merkel and Seehofer could prove costly, a concern has been exacerbated by the fact that Finance Minister Wolfgang Schäuble will not be part of the coalition talks because by the time they begin in earnest, he will have been elected as president of the Bundestag, Germany's parliament. "This will make it much harder for us to prevent an expensive deal," said one senior member of the CDU.

It is now up to Jens Spahn, state secretary at the Ministry of Finance, to step into Schäuble's shoes and make sure that spending does not spiral out of control. "There are some big ideas but not much scope to implement them over the next four years," he says. "If you want to maintain a balanced budget and reduce taxes then you better not have expensive plans."

Spahn isn't the only one with reservations about Merkel's agenda. The CDU/CSU fared as badly as they did in the election because they hemorrhaged 1.6 million voters to the pro-business FDP, more than they lost to any other party. Tackling this trend by shifting to the left is unorthodox, to say the least.

Even within her outgoing coalition with the center-left Social Democrats (SPD), Merkel was no vocal champion of free-market principles. In coalition negotiations in 2013, the SPD and the CDU not only approved the "mother's pension" but also the full pension for people retiring at 63. This pension package was the most expensive social reform of all time in Germany. By 2030, it will have cost 160 billion euros.

The Chancellery believes that a Jamaica coalition leaves the CDU with no other option than to make itself an advocate for pensioners and low-wage earners. As long as the unemployment rate remains low, no one will question Merkel's economic ability, so there is no sense in trying to compete with the FDP. But will her new approach help bring back the millions of voters who jumped ship and voted for the AfD?

Spahn has his doubts, and so do others. A 120-page book currently making the rounds in the CDU. Written by Werner Patzelt, a political scientist from Dresden, and published by Mario Voigt, deputy head of the party's state chapter in Thüringen, it reads like a sober account of how the parliamentary election unfolded.

From a democratic perspective, Patzelt writes, there is nothing wrong with the AfD having won seats in German parliament. Former CSU leader Franz Josef Strauss, he goes on, was always of the opinion that German conservatives should provide a political home even to the right wing, provided those voters were rooted in democracy. But "a new generation of CDU politicians thought they knew better and gambled away the CDU/CSU's representation monopoly to the right of the center." Patzelt himself is a member of the CDU and it wasn't necessary for him to mention Merkel by name. Everyone in the party knows who the critique is aimed at. 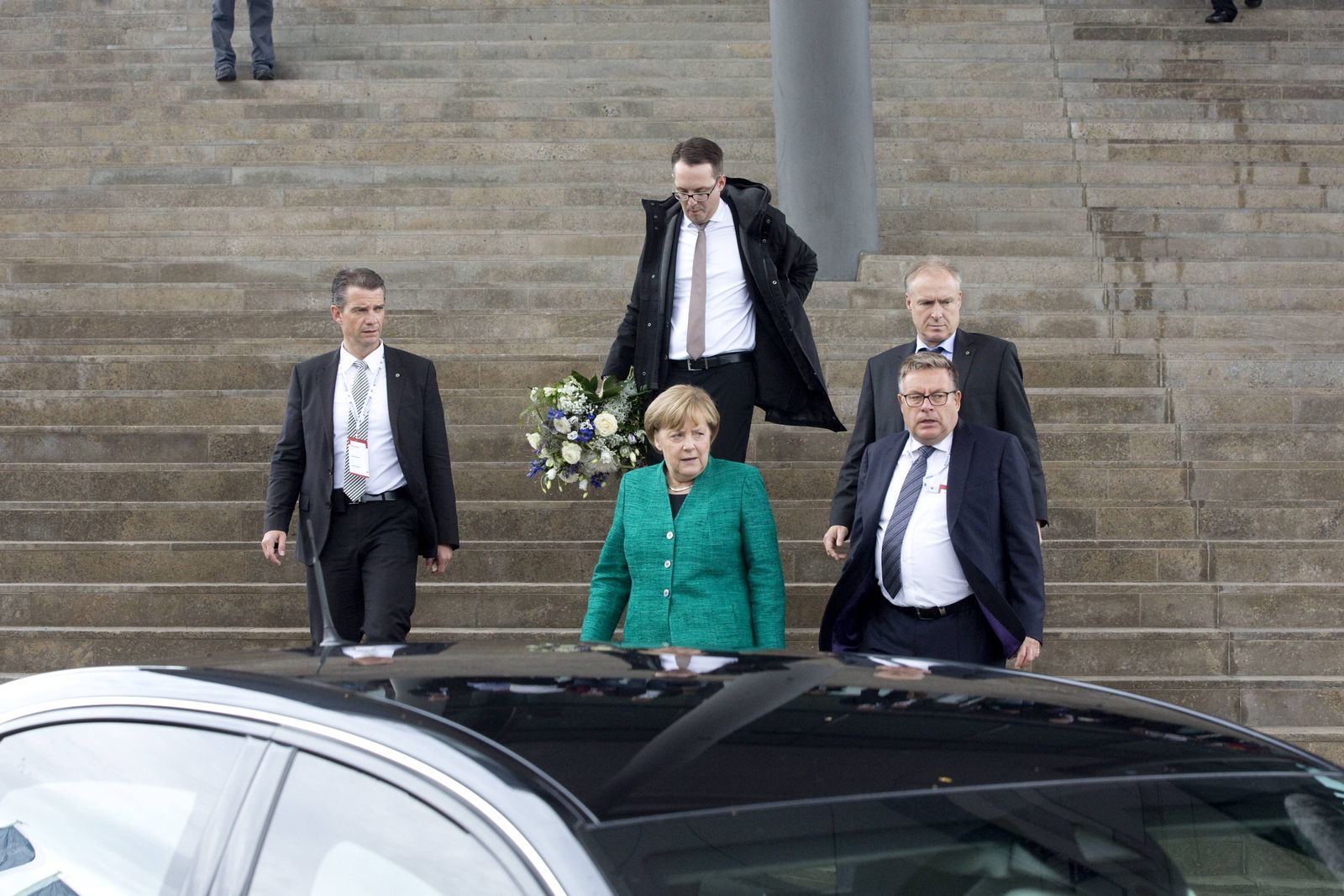 Angela Merkel at the annual Junge Union congress in Dresden.