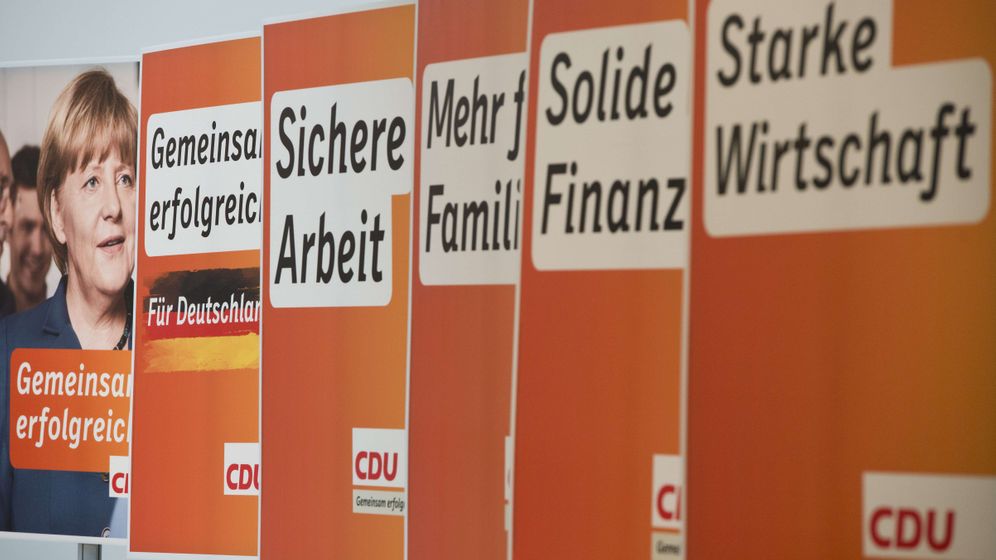 Lacking in content? Hermann Gröhe looks a bit offended as he peruses the signs standing behind him in a half-circle. "We can't put a whole newspaper on the wall," says the general secretary of Chancellor Angela Merkel's conservative Christian Democratic Union party. The CDU, he says, simply wants voters to take a closer look at its main messages and election-year platforms. But the question remains whether the campaign posters will entice voters or send them away in horror, saying, "No thank you, we've already had enough."

On Monday, Merkel's party unveiled the campaign signs that will soon be postered across Germany on front lawns, street signs and various other visible locales as the country enters the final stage of the campaign in the run-up to the Sept. 22 election. Coming a week after the CDU's main challenger, the center-left Social Democrats (SPD), came out with their own posters, though, the new ones are a bit underwhelming. Merkel's CDU are planning to distribute 9,000 large-format posters and around 300,000 smaller posters as part of their efforts to get their party and the current chancellor elected to a third term in government.

Initially, Merkel's image will be used only sparingly. Instead, the posters are focused on what the CDU says are the party's core competencies. One shows a young couple with motorcycle helmets expressing pleasure over the fact that the CDU is taking care to ensure economic growth and a stable euro. Another depicts a traditional mother-father-child family flipping an omelet in the kitchen, apparently out of enthusiasm that every family is "especially important" to the CDU. All three look maniacally happy. And that's in contrast to the people seen on the SPD's election posters, Gröhe points out. "There are no happy people in their posters," the CDU man says, noting that Germany is not a country of "doom and gloom."

As proof, the other posters, with the remaining CDU messages, veritably teem with confidence. "A Strong Economy," reads one with an orange background, the comforting color frequently used by the party in its promotional materials. "Job Security," "More for Families," "Solid Finances," or the CDU's motto: "Mutually Successful." Who wants to object? It's a good thing the CDU included its logos on the posters -- otherwise it might have been difficult to tell whether they belonged to Merkel's conservatives or the left-leaning SPD.

During the press conference, one journalist asked Gröhe if the CDU had any slogans that the SPD wouldn't dain to use in its own campaign? The campaign chief stopped for a second to mull a possible comeback to this provocation before answering with a joke. "Earlier, I would have said: The one with Angela Merkel. But that's no longer outside the SPD's sphere," Gröhe said, riffing on SPD posters that seek to poke fun at Merkel.

The SPD adopted negative campaigning as a key strategy in a series of posters released last week, featuring motifs poking fun at a recent Merkel gaffe on Internet privacy and the NSA spying scandal, as well as scandals that have embroiled two of her key ministers. But none such negativity is to be found in the CDU campaign. With Merkel clearly leading in the polls, there are no conspicuous attacks against the SPD, its chancellor candidate Peer Steinbrück or its planned coalition partner, the Green Party. Like the SPD, the CDU is also waiting before making its leading candidate, incumbent Merkel, the focus of posters. Merkel is only included on one current poster motif. More are planned for the next few weeks, though, with the campaign planning to bank on Merkel's popularity and her status as the incumbent. "We will get more personal in the course of the campaign," Gröhe said Monday.

A new campaign brochure also released by the CDU on Monday provides a preview of things to come. The brochure offers an unusually -- at least for Merkel -- personal look at the chancellor's private life. It includes numerous photos, mostly of a smiling Angela Merkel, from different stations in her life and career. They include small biographical and political quotes from Merkel, with harmless lines like, "Children are the future of our country," or "I like my work."

Merkel also provides a candid glimpse into her private life, showing that when she's not helping to solve global crises, she sometimes likes to play the Hausfrau. A photo with the heading "Nature" shows the chancellor sitting aside a lake. Across the photo, a quotation reads: "I am a passionate gardener and a I grow my own vegetables." She also espouses a fondness for cooking, especially potato soup and roulade, and says that her husband seldom has anything bad to say about the work she does in the kitchen. "The only thing he complains about is that there are too few crumbles on the cake for his taste. After all, he's a baker's son."