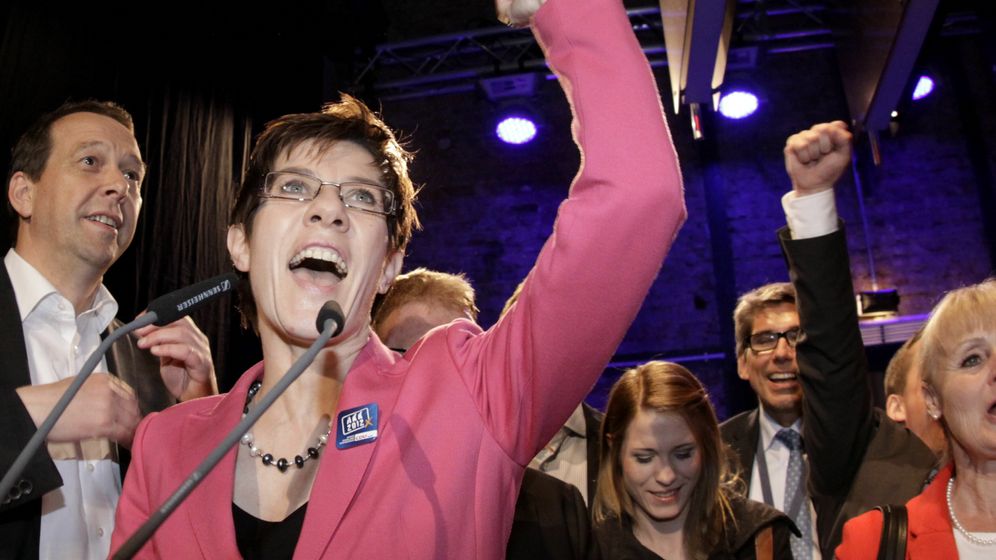 There was relief in Christian Democratic Union (CDU) headquarters in Berlin on Sunday evening after the results of the election in the tiny western German state of Saarland were announced. Many observers had expected that the result would be yet another expression of voter frustration with the national government of Angela Merkel's center-right CDU, its Bavarian sister party, the Christian Social Union, and the business-friendly Free Democratic Party.

But in the end, the CDU won a surprisingly clear victory, gaining 35.2 percent of the vote, according to preliminary official results, a gain of 0.7 percentage points over the last election in 2009. The incumbent state governor, Annegret Kramp-Karrenbauer, will continue in her position.

The center-left Social Democratic Party (SPD) came second with 30.6 percent, a gain of six percentage points from 2009, when they got 24.5 percent.

Kramp-Karrenbauer announced on Sunday evening that she would quickly begin negotiations with the SPD to form a so-called "grand" coalition government. Both parties had announced during the campaign that they wanted to rule in coalition -- meaning that voters' only real choice was which of the two main parties would appoint the state governor.

Early elections became necessary after Kramp-Karrenbauer dissolved her three-way coalition with the FDP and the Greens in January. At the time, Kramp-Karrenbauer blamed the collapse of the state government on FDP in-fighting.

On Sunday, voters punished the FDP, who received just 1.2 percent of the vote, falling far short of the 5 percent hurdle that is necessary to get seats in the state parliament. The result represents a major collapse of support for the party, which got 9.2 percent in the 2009 Saarland election. The poor showing is yet another setback for the ailing FDP, Merkel's junior partner in the national government, and is likely to increase tensions within the coalition in Berlin.

The Greens fared slightly better, barely managing to secure seats in the parliament with 5.0 percent of the vote. The far-left Left Party was the third strongest force, receiving 16.1 percent, down from 21.3 percent in 2009.

Mathematically, a coalition between the SPD and Left Party would be a possibility, but the SPD has categorically ruled out such an alliance. Oskar Lafontaine, the Left Party's lead candidate in the state, his political heartland, is the SPD's bête noire, having left the party in 2005 following an acrimonious split with Gerhard Schröder's administration. He later helped to found the Left Party.

The real winner of Sunday's election was Germany's newest political force, the Pirate Party, which campaigns for political transparency and Internet freedom. They won 7.4 percent of the vote, despite having had to rush to cobble together a campaign after snap elections were called. They will now be represented in the 51-seat state parliament with four seats. It is their second entry into a state parliament after winning almost 9 percent of the vote in the Berlin state election in 2011. The Pirates' success is likely to cause concern for the Greens, who are in danger of losing voters to the political upstarts. Observers attributed the Pirates' success in Saarland partly to voter frustration with perceived political corruption in the state.

The national implications of the vote are limited, as Saarland is Germany's smallest non-city state, but Merkel's CDU was clearly relieved at not having suffered a defeat ahead of much more significant state elections in Schleswig-Holstein and North Rhine-Westphalia in May. "The citizens have received the governor that they wanted," said Kramp-Karrenbauer on Sunday evening.

Peter Altmaier, a senior CDU politician on the national level, said that voters had respected Kramp-Karrenbauer's "courage and clarity." The result was "encouraging" for Merkel in the run-up to the state elections in May, he said.