Poor, uneducated and living in a "parallel society" of headscarf-wearing women and criminal youth: The common stereotype of Muslims in Germany is not an all-too-positive one. But a new study reveals a surprisingly different picture of the reality -- including the fact that many more Muslims live in Germany than was previously believed. 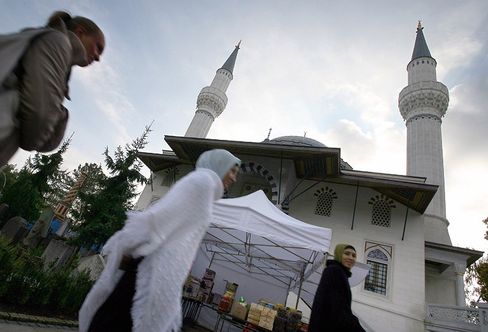 A Berlin mosque: Around a third of Muslims in Germany describe themselves as "very religious."

The study, which was commissioned by the Interior Ministry together with Germany's Islam Conference, is the first country-wide study that gives a representative overview of Muslim life in Germany. Researchers from the Nuremberg-based Federal Office for Migration and Refugees (BAMF) interviewed around 6,000 Muslims from 49 different countries about the role of religion in their everyday life and various aspects of integration. A summary of the study was published Tuesday and the full study will be presented Thursday at the last meeting of the Islam Conference, which Interior Minister Wolfgang Schäuble initiated in 2006 in a bid to launch a dialogue between the German state and the Muslim community.

Many More Muslims in Germany

One of the study's most surprising findings is that Germany is home to many more Muslims than was previously believed. The researchers concluded that between 3.8 million and 4.3 million Muslims live in the country, making up around 5 percent of the total population of 82 million. The figure had previously been estimated at between 3.1 million and 3.4 million. The reason for the huge increase is that the study's authors took more countries of origin into account than had previously been the case, and also looked at the children of Muslims with German citizenship.

Regarding the issue of citizenship, the study revealed that around 45 percent of Muslims living in Germany have a German passport. Another sign of successful integration, in the view of the authors, is the fact that more than half of Germany's Muslims are members of what the authors term a "German" club or association -- a designation that includes sports clubs, unions and associations for senior citizens, but not clubs based around members' country of origin.

Almost two-thirds of Germany's Muslims are of Turkish origin, the researchers found, while smaller groups come from Balkan countries such as Bosnia or Albania, the Middle East and North Africa. Almost all live in the states of the former West Germany and Berlin, with the most living in North Rhine-Westphalia, Germany's most populous state.

The study also reveals surprising results when it comes to some key issues in the often-heated integration debate in Germany. Contrary to popular stereotypes, 70 percent of female Muslims do not wear a headscarf, with second generation immigrants less likely to wear a headscarf than their mothers. And Muslim girls, who are commonly imagined to be closeted away by their families, are much more involved in school activities than generally believed: Some 90 percent of female Muslim students take part in school trips while 93 percent take part in swimming lessons, another hot-button issue in Germany.

The study also found that the majority of Muslims consider themselves religious. Around a third described themselves as "very religious" and a half said they were "somewhat religious." However only about a third of respondents regularly attended a mosque, although 76 percent said they wanted Islamic religious education classes in schools.

When the researchers compared the first and second generations of Muslim immigrants, they found that Muslims born in Germany showed higher levels of education compared to their parents, particularly when it came to girls. In the case of female Muslims, this was partly due to the very low level of education of many female first generation immigrants.

However it wasn't all good news. The study's authors found that the Muslim community is home to a disproportionately high level of school drop-outs, unemployed and poor people -- particularly among immigrants of Turkish descent.

Interior Minister Schäuble said the situation of Muslims in Germany had improved in recent years, party as a result of the dialogue with the Muslim community. "Muslims feel more comfortable and more accepted here in Germany today," Schäuble told the German news agency DPA. "And the non-Muslim part of our society has better understood that Islam is a part of our country and that diversity is not a threat but in fact enriches our society."