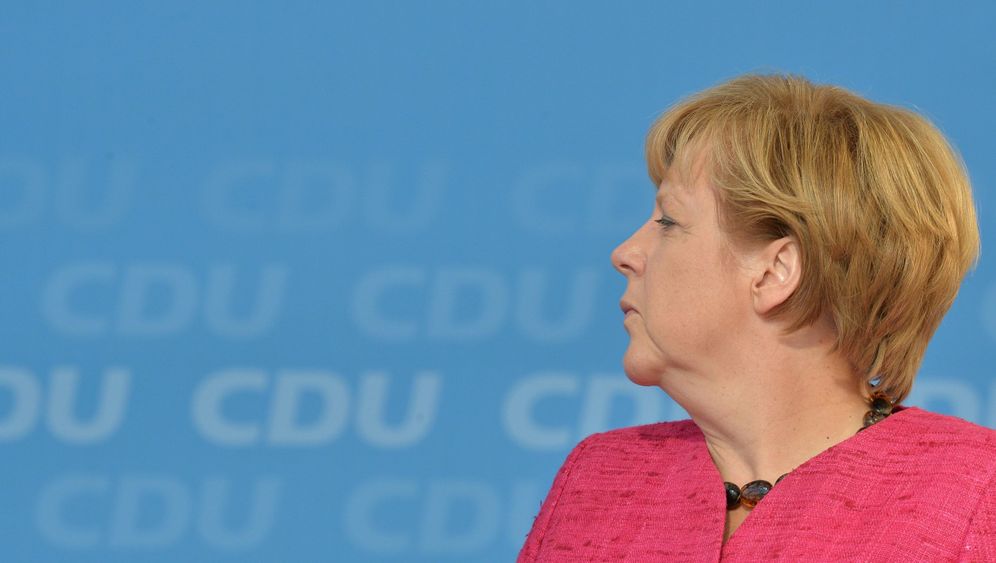 It certainly wouldn't hurt, Angela Merkel must know that. After all, she worked with the man for several years, back when she was the head of a coalition with his Social Democratic Party (SPD). He was finance minister, and one can only assume that she at least occasionally addressed him by his name.

Now, however, as the campaign heats up ahead of the Sept. 22 general election, Peer Steinbrück has disappeared from Merkel's vocabulary. She has studiously ignored him ever since the SPD chose Steinbrück as its candidate for the Chancellery last September. Even now, with just a few weeks to go before the vote, Merkel has shown no sign of breaking her vow of silence. Not even on Wednesday, when she held her first large rally of this campaign, one of 56 such gatherings on her schedule between now and the vote.

The gathering took place in the small town of Seligenstadt am Main, located in Hesse in the west, where a state vote is scheduled for the same day as the federal election. It is a beautiful town, with a cobble-stoned market square and well preserved, half-timbered houses. Indeed, the idyllic location only served to highlight Merkel's merciless treatment of, or indifference to, her challenger, an approach born of supreme confidence as the campaign enters its final phase.

Her optimism is well-founded. Merkel's conservatives are way ahead of the SPD in public opinion polls and Steinbrück has been able to make no inroads into the chancellor's personal popularity ratings. And the news only seems to improve, particularly on Wednesday with the announcement that Germany's economy grew by 0.7 percent in the second quarter and the euro-zone economy is no longer in recession. Furthermore, the SPD leadership in recent days has once again seemed more focused on infighting than on finding ways to put Merkel on the defensive.

Still, a handful of SPD members were on hand in Seligenstadt on Wednesday to remind the chancellor that she does indeed have an opponent in this election. Perhaps two dozen of them demonstrated armed with posters decrying mass digital surveillance by the US intelligence agency NSA and with chants calling for Merkel to go. Together with whistles and noise-makers, they made such a din that children nearby covered their ears.

On stage, Merkel did her best to keep her calm. But ultimately, she had little choice but to address the disruption, saying that the state doesn't pay attention to people just because they can scream the loudest.

It wasn't a particularly nice thing to say, but it was the only moment in the rally when Merkel seemed to actually be campaigning. The rest of the time, she appeared to be doing her best to ignore anything that might be construed as a campaign issue. She didn't waste a single word on the NSA affair, mentioning only "security in all directions," adding that that applied to the terrorist threat as well as to the Internet.

Instead, she ran down the list of her government's achievements, praising her coalition for the reduced unemployment rate, budgetary consolidation and the massive expansion of day-care options. She added a couple of elements from the Christian Democrats' campaign platform, such as increased investment in education and research as well as a call for the minimum wage. She allowed herself a brief quip about the Green Party's proposal for a "vegetarian day" and even mentioned the SPD's plan to raise taxes on above average earners.

But the message, delivered with little emotion, was clear: There is no need to change course. And that, likely, will be enough to earn her a third term in the Chancellery.

It is the kind of campaign that is very much to Merkel's liking. No need to polarize, no need to go on the attack. And very little stress, even if polls indicate that her current coalition, with the Free Democratic Party as her junior partner, may not survive the vote.

In the evening, Merkel took a helicopter to cover the 80 kilometers from Seligenstadt to Ludwigshafen. The atmosphere on the central square of Ludwigshafen, Helmut Kohl's hometown, is much bleaker. But, without the rowdy group of SPD protesters, it was also much quieter. Even then, however, there is one thing Merkel's listeners did not hear: The name Peer Steinbrück.