Germany was hardly coy about its skepticism of the international coalition operation in support of the rebels in Libya. In March, the country abstained from the United Nations Security Council vote which authorized military force in the North African country. And since then, Foreign Minister Guido Westerwelle has passed up few opportunities to reiterate his doubts about the ongoing operation.

Now, however, it would seem that Germany might be willing to play a role in Libya after all. In a Thursday interview with the television channel N24, Westerwelle said that Germany would take part in a European Union humanitarian mission should such an operation come to pass. Were the United Nations to make a request for assistance, "then of course we wouldn't shirk our responsibility," Westerwelle said.

For the moment, of course, such a mission is purely hypothetical. While European Union foreign ministers agreed in March that it would make an EU battle group available should it become necessary to escort humanitarian operations, the UN Office for the Coordination of Humanitarian Affairs (OCHA) has so far made no such request. Germany currently contributes 990 troops to one of the two EU battle groups. Any participation of the groups would be limited to escorting humanitarian and medical supply shipments and providing security during the evacuation of refugees.

Germany participation, however, would have to be authorized by parliament. According to a report in the Süddeutsche Zeitung, Berlin is currently preparing a mandate which could be quickly authorized in the event it receives an OCHA request.

'Readiness for Such a Mission'

Government sources have denied to SPIEGEL ONLINE that participation in such a humanitarian mission would represent a change in course on Libya. "The European Union, including Germany, expressed in principle in March its readiness for such a mission," the sources said.

Still, Germany's abstention was widely condemned both at home and abroad. Berlin has been eager since then to deflect accusations that the country is not living up to its obligations as a member of NATO and as a major Western ally. In the days following the Security Council vote, which took place on March 17, Germany quickly moved to beef up its involvement in Afghanistan to free up US AWACS reconnaissance planes necessary for the Libya operation.

The opposition in Berlin has been critical of Westerwelle and Chancellor Angela Merkel when it comes to Berlin's position on Libya. On Thursday, Omid Nouripour, the Green Party's security expert in parliament, told SPIEGEL ONLINE that "providing support for humanitarian aid operations is self-evident. But that isn't enough. As a country that has delivered weapons to (Libyan dictator Moammad) Gadhafi in recent years, we should now be participating in the maritime weapons blockade." Rainer Arnold, a defense policy expert for the Social Democrats in parliament, told the daily Mitteldeutsche Zeitung that "Germany would be wise to participate" in the Libya operation.

Christian Lindner, general secretary of Westerwelle's party, the Free Democrats, insisted on Thursday that Berlin's support for participation in humanitarian operations was not a shift in policy. "The German military will not intervene militarily in Libya," he told the southern German daily Passauer Neue Presse.

NATO air strikes in Libya have been ongoing for the last four weeks. Initially, coalition bombs and missiles were able to quickly force pro-Gadhafi forces away from rebel-held towns in northeastern Libya. But since the US withdrew its aircraft from the mission earlier this week, the NATO-led coalition has flown fewer sorties and the situation on the ground has become largely static.

On Thursday, General Carter Ham, head of the US Africa Command, the Defense Department authority responsible for the armed forces in the region, said "I would agree with that at present on the ground," when asked if a stalemate was emerging. He also said that he didn't think that military action would bring about an end to the conflict and said during a Senate hearing that he thought Washington should not move to arm the rebels until more is known about them.

Also on Thursday, Turkish Prime Minister Recep Tayyip Erdogan said that Turkey was working on a plan to bring about a negotiated end to the violence. He said the plan would include both a ceasefire and the withdrawal of pro-Gadhafi forces from some cities. Erdogan said his government had been in touch with both the Gadhafi regime and rebel leaders.

In a separate development, a NATO jet accidentally fired on a rebel position not far from the coastal city of Brega on Thursday. At least 10 rebel fighters were killed in the incident. 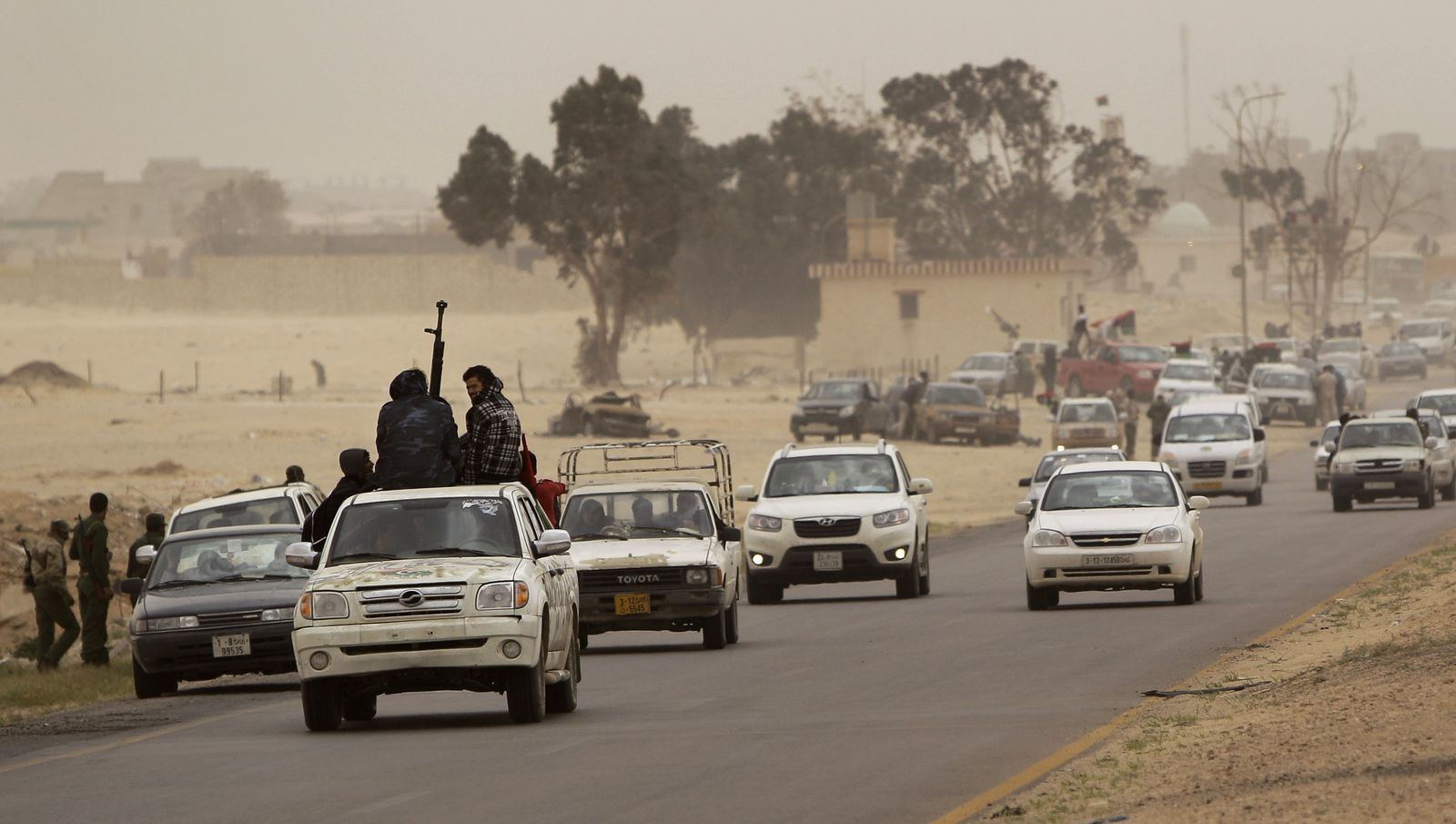