Death from swine flu comes unexpectedly, as was the case with six-year-old Kharra Skye Davis from Hot Springs, Arkansas, who spent 20 hours fighting for her life, and with Kyree James Gamble, 5, from Littlestown, Pennsylvania. Both were healthy children, and both lost their lives before they had truly begun.

In the case of Kharra, who died in September, the cause of death was respiratory failure. The little girl had attended a birthday party, and by that evening she had a fever of 40.5 degrees Celsius (105 degrees Fahrenheit). Kharra quickly developed pneumonia, and by the next day she was dead. 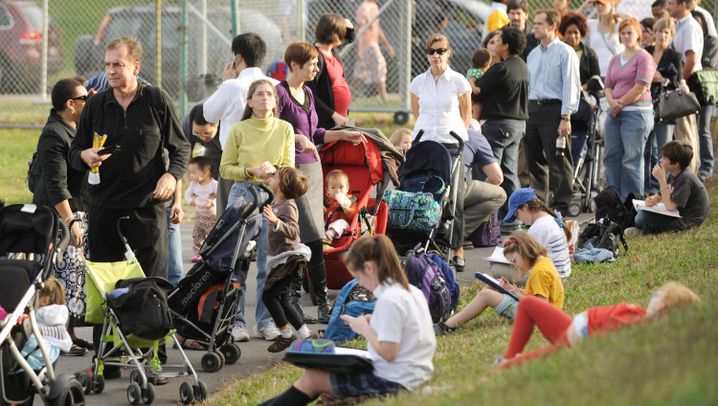 In Kyree's case, doctors fought the virus for 22 days. The boy's small body was resilient, but in the end he suddenly developed a staphylococcus infection that his lungs were unable to fend off. His mother Marci stayed by his side until the end.

The swine flu has struck the United States with a severity not yet seen in Germany and other European countries. The illness is now widespread in 48 of the 50 US states, say the infectious disease experts at the Centers for Disease Control and Prevention (CDC). To facilitate patient care, US President Barack Obama has declared the swine flu epidemic a national emergency.

Worried parents and their coughing children are jamming the emergency rooms at many hospitals. In some cities, hundreds of people spend hours waiting in line for the vaccine, which has been scarce until now. Schools are closing, because there are either not enough teachers or students to continue classes.

According to CDC estimates, up to 34 million Americans may have already contracted the virus between April and July. More than 3,900 Americans, including at least 450 children, have already died of the disease or its consequences.

The H1N1 mortality rate in the general population is at least 30 times as high in the United States as it is in Germany. But will it stay that way? Or is the United States simply a few weeks ahead of Europe in the progression of the epidemic?

The number of people infected with the virus is rising in Germany, where it has already claimed its first fatalities. By Wednesday of this week, 16 people had died of swine flu across Germany. Fear of the virus is rampant. While only a minority of Germans wanted to be vaccinated at first, doctors' offices are now inundated -- and chaotic.

There is considerable uncertainty within both the general population and the medical community. How high is the risk of becoming infected? And how serious is the illness? Even epidemiologists can say little more than that the virus is currently spreading rapidly throughout the entire northern hemisphere. But no one knows how many people are actually infected.

According to the Robert Koch Institute (RKI), the German federal institution responsible for disease control and prevention, there are now 30,000 registered cases of swine flu infection. But that number is relatively meaningless, because the RKI database generally includes only those cases in which a very complex, costly and rarely performed series of laboratory tests has confirmed the diagnosis.

"A precise estimate is not possible at this time," says Gérard Krause, the head of the RKI's Department for Infectious Disease Epidemiology. The virus has become so widespread that it can now be contracted virtually anywhere. Many of those with symptoms don't even go to the doctor, while a significant percentage of those infected have no symptoms at all. Scientists are surprised by how many people already have antibodies against H1N1 in their blood without even knowing that they had the swine flu.

Conversely, not everyone who is sick in bed with a fever and a cough has the swine flu. More than 200 different viruses can cause flu-like symptoms. Of the throat swabs taken from patients suspected of having swine flu that were sent to the RKI's National Reference Center, only 40 percent actually tested positive for H1N1 in the end. In other words, three out of five patients believed to be infected with the virus did not have swine flu.

How Dangerous Is the Virus Really?

Because the numbers are so imprecise, no one knows how dangerous the virus really is. The RKI stresses that swine flu symptoms are "mild in most cases." But will the virus end up killing one out of every 250 infected individuals, as the initial data from Mexico had suggested? Or will the mortality rate be closer to one in 10,000, as later calculations indicated? Or is possible that the H1N1 mortality rate is even much lower, because the total number of infected individuals is much higher than health officials believe?

The US's experience with the virus shows that the infection strikes young people at a noticeably higher rate than normal. "This is a younger people's flu," says CDC Director Thomas Frieden. To be on the safe side, the agency has released the last national stockpiles of Tamiflu powder for children and ordered new packages of the flu medication.

The mortality rate for swine flu is also higher among young people, as opposed to the seasonal flu, which is more often deadly in the elderly. Those particularly at risk are pregnant women, the obese and people with other underlying disorders. Many of the people who died of the disease in Germany already had chronic conditions such as reduced pulmonary function, were severely disabled or were heavily overweight. A man in Heidelberg who died of the swine flu had been waiting for an organ transplant.

However, a number of patients in the United States without underlying risk factors have also died. This is what many find truly frightening about the virus. It can apparently lead to sudden lung failure in young, completely healthy people, who have to be taken to an intensive care unit within hours. But even putting them on an artificial respirator cannot save all of these patients.

About two weeks ago, a completely healthy, 48-year-old mother of four died of the swine flu at the University Hospital Bonn. It was a death that shocked many people.

For Christian Putensen, the head of the surgical intensive care unit at the Bonn hospital, such a dramatic progression of the illness is nothing new. "Again and again, we see young people, previously completely healthy, with pneumonia and sudden lung failure," he says. "This can also happen without any evidence of swine flu."

Wolfgang Becker-Brüser of Arznei-Telegramm, a magazine aimed at doctors and pharmacists that has been critical of the pharmaceutical industry, says: "The problem is that we are not placing the swine flu in relation to other infectious diseases. If we were to pay as much attention to the normal winter flu as we are now paying to the swine flu, the media would be reporting dozens of deaths every day. People are being frightened, so that they are no longer making rational decisions."

The chaos surrounding vaccination contributes the general feeling of uncertainty. Local health authorities are still relatively effective in their processing of large numbers of people seeking vaccinations. But in many cities vaccinations are not offered by local health authorities, but in doctors' offices. Because of this inconsistency, many patients are unsure where to go to be vaccinated. In the northern German state of Schleswig-Holstein, for example, the Health Ministry has published a list of doctors' offices where the vaccine is supposedly available. The only problem is that not all of the doctors on the list are in fact participating.

The situation in the northwestern state of Lower Saxony is even more confusing. There, patients must first call one of the 11 district offices of the state Association of Statutory Health Insurance Physicians to find out which doctors offer the vaccinations. But this approach also covers up the fact that in some parts of the state almost all doctors have refused to provide the vaccinations. The additional expense and risk is a deterrent for some family physicians. Others, like Wolfgang Schneider-Rathert, a general practitioner in Braunschweig, are refusing to participate out of principle. "In the event of a real catastrophe, it would certainly be reasonable to use the vaccine," says Schneider-Rathert. "But that is by no means the case now."

On the other hand, many doctors willing to provide vaccinations have run into difficulties getting the vaccine. "Instead of the 1,000 doses that were ordered, we received all of 160 on Monday," reports Thorsten Ottlewski, a general practitioner from the town of Burgwedel near Hanover. He had no choice but to cancel hundreds of appointments, mainly with police officers and firefighters. "I would never have thought that the whole thing would be so poorly organized," says Ottlewski.

To complicate matters, the pharmaceutical company GlaxoSmithKline has only delivered about half as much vaccine as expected by now -- and that vaccine remains highly controversial, because of possible side effects.

Because of the problems with the vaccine, many German doctors are now envious of their counterparts across the Atlantic. None of the vaccines used in the United States contain controversial ingredients, known as adjuvants, intended to enhance their effect. The US vaccines are manufactured in precisely the same way as the seasonal flu vaccines, which have been tried and tested for years.

The German government, on the other hand, signed a contract in 2007 that requires it to use Pandemrix, a new type of vaccine containing AS03, an adjuvant that has only been used in clinical trials until now, in the event of an influenza epidemic. If the type of influenza in question had been a deadly avian flu instead of the still relatively mild swine flu, this approach would have made sense.

But now many doctors feel that the use of Pandemrix poses an unnecessary risk. To make matters worse the vaccine, which tests have shown is less well tolerated than seasonal flu vaccine, was never extensively tested with the chronically ill, a group that health officials are now recommending should be vaccinated first.

Pandemrix could also pose as yet unknown risks for healthy individuals. Is there an elevated risk that the vaccine could cause Guillain-Barré syndrome, a disorder of the peripheral nervous system that results in muscular weakness? "We won't know that until several months from now, when people are no longer thinking about this swine flu season," says Wolfgang Becker-Brüser from Arznei-Telegramm. The Paul Ehrlich Institute, an agency of the German Health Ministry, is conducting an extensive study on the problem, but it doesn't end until September 2010.

"In the United States, anyone can get vaccinated without hesitation," says Becker-Brüser. In Germany, on the other hand, the uncertainties surrounding the vaccine have led to every expert making a different recommendation. German virologists and internists have always favored mass vaccination. Pediatricians and the German Medical Association, initially critical of the vaccine, have since changed their minds, because of the rising numbers of cases.

But Michael Kochen, president of the German College of General Practitioners and Family Physicians (DEGAM), remains as skeptical as Becker-Brüser -- for now, at least. "I would only recommend vaccination with the adjuvant vaccine if severe cases begin to spread rapidly," he says.

Pregnant women, with whom Pandemrix was never tested, are particularly worried. "The focus of preparations for a pandemic was not on pregnant women," concedes Johannes Löwer, the outgoing head of the Paul Ehrlich Institute, which is responsible for vaccines.

All of this has led to considerable confusion. While the European Medicines Agency has approved Pandemrix for pregnant women, Germany's Standing Committee on Vaccination advises against it and recommends that pregnant women receive vaccines without adjuvants -- which, as it happens, are not available yet.

A vaccine suitable for pregnant women, probably from Australia, is not expected until the end of November. 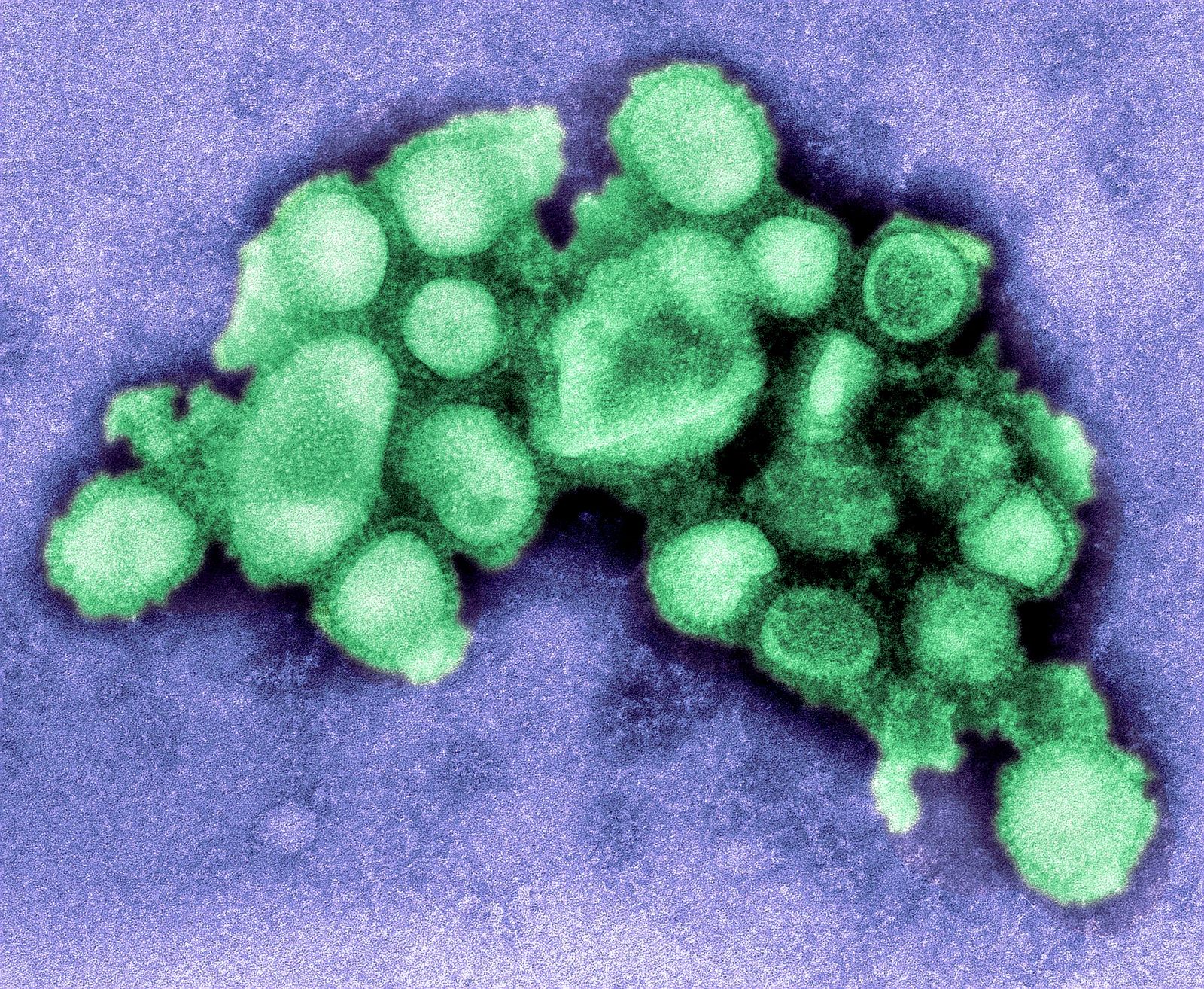 The swine flu virus: German experts are divided as to how dangerous it really is.

The swine flu virus: German experts are divided as to how dangerous it really is.