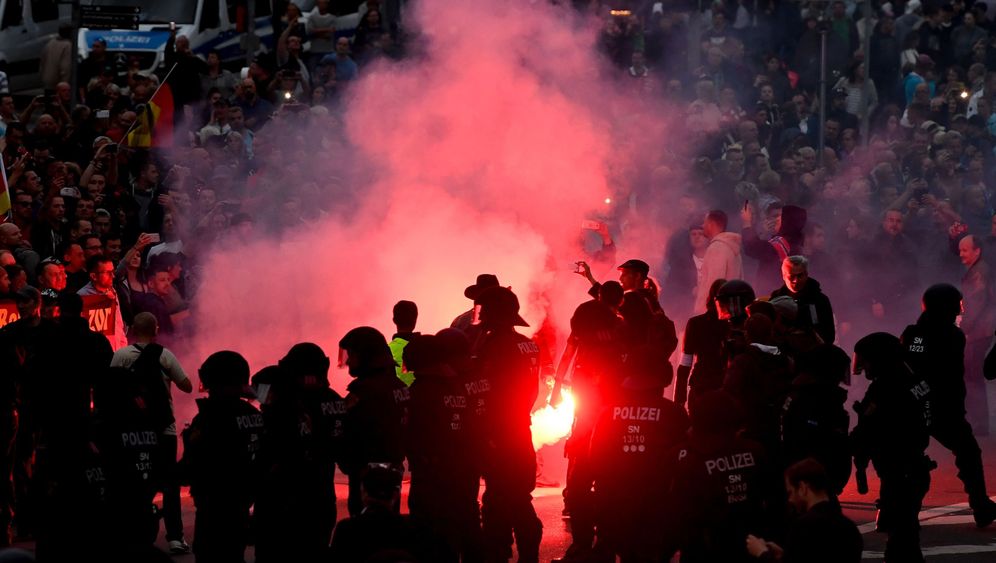 The neo-Nazi goes on the attack. He throws his arms above his head, yells and waves toward the parade of demonstrators in an attempt to get his comrades to follow him. Then, along with a group of 10 to 12 others, he storms up the stairs to a terrace in front of the Stadthalle, an event venue in the heart of the city of Chemnitz. On the terrace are cameramen, onlookers and counterdemonstrators -- and they don't see the attackers coming. The neo-Nazi grabs a young man from behind, jerks him to the ground and hits him. Over and over again.

Only then do four police officers show up and push the neo-Nazis back. The officers are clearly overwhelmed, just as the entire police force had been throughout the demonstrations on Monday evening -- demonstrations that eventually turned into a riot.

A riot fueled by xenophobic hatred.

Chemnitz is the third-largest city in the eastern state of Saxony and initially, over a thousand people had gathered on Monday to protest the kind of right-wing violence seen here on Sunday. Later, several thousand participants in a right-wing rally gathered at the city's iconic monument to Karl Marx. The two camps were separated only by a single road and handful of law enforcement officers. The mood was tense - and turned violent once darkness began to fall. Fireworks were set off and the two groups began throwing projectiles at each other. There were several injuries.

Later, the police would say that they had underestimated the number of people that would be participating in the two demonstrations. That they were caught off guard.

But given the events in the city just one day earlier, that seems unlikely. Early on Sunday morning, 35-year-old Daniel H. was stabbed to death at a festival in the Chemnitz city center. Immediately, rumors began making the rounds on right-wing websites and social media platforms that the perpetrators were migrants and the focus of their anger soon came to rest on refugees.

A right-wing mob quickly gathered and began chasing people through the streets. According to media reports, the police initially sought to quell the unrest with two relatively small units and were completely overrun at times.

That, Chemnitz Police Chief Sonja Penzel promised on Monday afternoon, wouldn't happen again. But it did. Just a few hours later on Monday evening, police again found themselves facing a greater number of right-wing protesters - a group that also included Marcel, a broad-shouldered, 31-year-old craftsman. He says that he's not the kind of guy to quickly lose his temper. But recently, as he was just coming out of a club in the Chemnitz city center with his girlfriend, two men approached from behind - men who "didn't speak accent-free German."

Marcel says the two began insulting his girlfriend and spat on him, in response to which Marcel punched one of them in the face. When the police arrived, they didn't arrest Marcel, but instead took the man with the bloodied face into custody. Marcel says he wasn't surprised. "I have two friends who are police officers. The police here know how to deal with such situations."

A few meters further ahead, two demonstrators are imploring the police: "Let us through to the leftists! That's what they want too!" His buddy adds: "Yeah, send the women home and then, mano a mano."

That would come later.

Silvia Faschner (her name has been changed by the editors) is standing off to the side. The 64-year-old undertaker has come with her son, who works as an elderly care nurse. She points over to the other side where a group has gathered to protest right-wing extremists in Chemnitz. And where a handful of young men from Syria have assembled under a tree.

Furious at the Federal Government

Faschner points to the Syrians and says: "I just don't want so many foreigners coming. When I look over there, I wonder why my tax money is spent on them. They just want to be professional football players or singers, but if they actually have to do a bit of hard work, they complain that their back hurts!"

She doesn't know the exact numbers. But according to statistics reported by the local Chemnitz newspaper Freie Presse, foreigners made up only 7.6 percent of the city's population at the beginning of 2018, while the share of refugees was just 2.41 percent. The newspaper cited statistics compiled by Chemnitz City Hall.

And yes, Faschner says she understands why they left their country, but she says there are 2 million children in Germany who live below the poverty line. "Why," she asks, "is nobody doing anything for them?" She says that social inequality makes her furious - furious at a federal government that, she says, does nothing. She plans on retiring next year, but her pension will be small, she says. And her son doesn't earn much either.

If you ask why she blames the refugees instead of, for example, unfair income distribution, she says: "Because you have to be against someone, and with them, it's easy." She insists, though, that she isn't a Nazi. Nazis, she says, are the ones who use violence against others.

The violence starts shortly before 8 p.m. Several hundred right-wing radicals suddenly begin pushing against a line of riot police chanting: "Free! Social! And national!" A firecracker flies off toward the counterdemonstrators and explodes. The right-wingers begin throwing glass bottles into the crowd. A flare comes down and several police rush to get out of the way. It is a moment when they can't even guarantee their own security. With great effort, the police are able to push the mob back and are only just able to prevent a larger confrontation.

The right-wingers begin moving, marching through the city chanting: "Germany for the Germans! Foreigners Get Out!" Some stretch out their right arms in the Hitler greeting, which is illegal in Germany. They are flanked only by small groups of police. "We are receiving reports that huge numbers of paving stones are being pulled up," the officers are warned over their radios. Another police officer says of an order they receive: "Given our numbers, that isn't very smart, but the order came from the commanders." Given the situation, the two water cannons parked nearby don't provide much reassurance.

Back at the starting point of the demonstration, small groups of right-wing extremists keep marching. Under the protection of the deepening darkness, they spread out across the city, disappearing into side streets and parks. They verbally harass journalists, go after counter-demonstrators and attack a leftist housing project. At least two people are injured.

At the same time, the last lines of a song can be heard as the rally draws to a close: "Flourish, German Fatherland!"

Later, the Chemnitz police will release a statement saying that their operation was "not trouble free." Not enough officers were on duty. 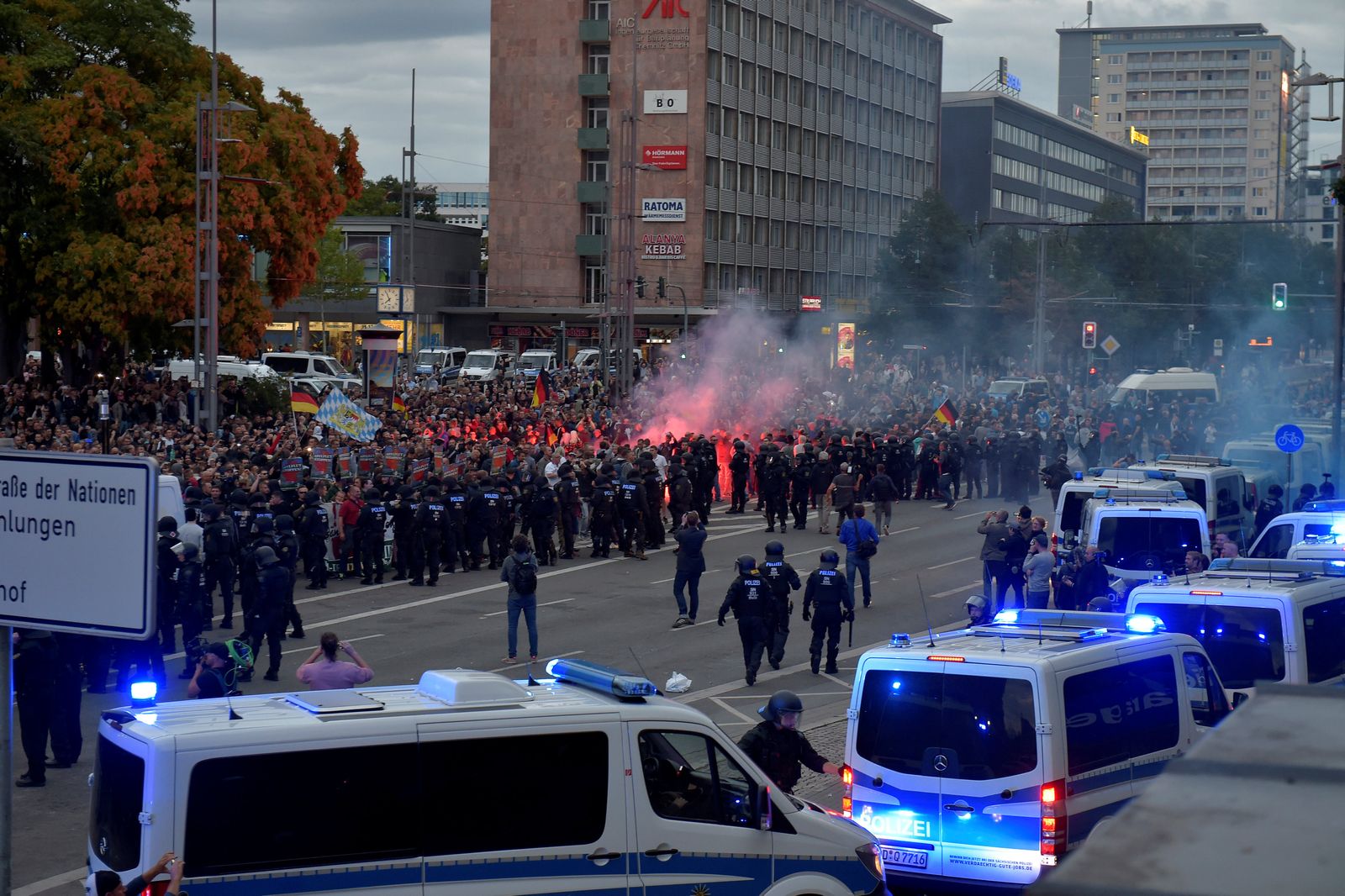 At times, the two protests were separated only by a single street and an insufficient number of police officers.