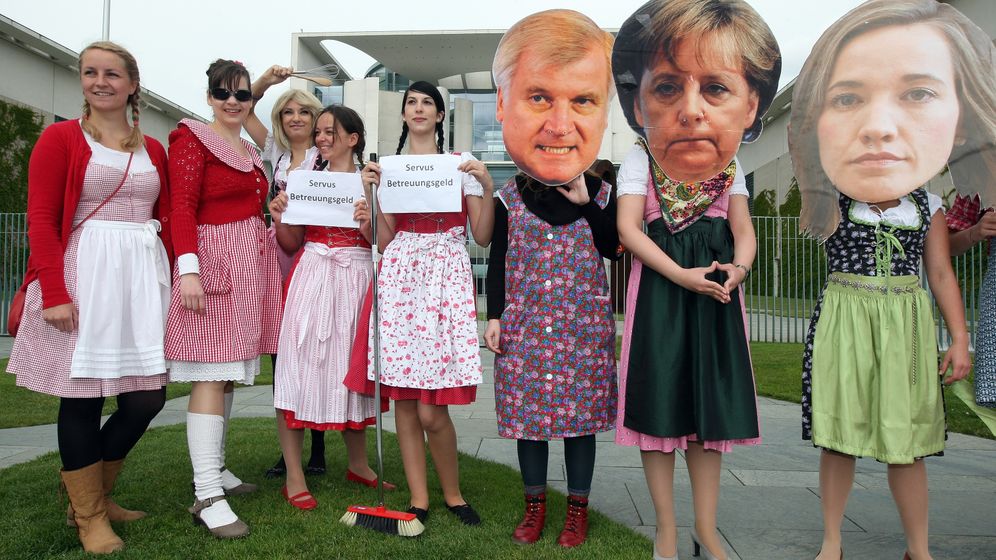 On Tuesday, Chancellor Angela Merkel made the latest in a series of difficult recent visits to the conservative caucus in Germany's parliament. On the agenda, yet again, was a controversial draft law that would provide mothers who stay at home with their young children €150 ($190) per month for their trouble. Prior to departing for the meeting, Merkel reportedly joked that she was visiting "the vestibule of hell."

The source of her trepidation is not difficult to pinpoint. The law, essentially a complement to Berlin's project of making affordable daycare universally available, has been bitterly divisive. Many within Merkel's Christian Democratic Union (CDU) are against it, the center-left opposition has blasted it for promoting an antiquated view of women's role in society, and leading feminists in the country are up in arms. Even the Organization for Economic Cooperation and Development (OECD) got into the act earlier this week, warning that such a childcare allowance, known in German as Betreuungsgeld, could be a disincentive for immigrant mothers to find work and would also result in immigrant children staying home longer and learning German later, thus slowing integration.

Merkel has little choice but to push the law through anyway. The Christian Social Union (CSU), the CDU's Bavarian sister party, has indicated that it will brook no hesitation, and Merkel can ill afford further friction in her already fractious coalition. Furthermore, the CSU no longer has as much support in Bavaria as it once did, and the party is eager to throw around its weight on the national stage to prove its value ahead of crucial elections in the state next year.

Still, the charge that Merkel, the world's most powerful woman, is betraying feminism is the most painful. The chancellor, after all, has presided over an impressive array of reforms aimed at making it easier for German women to combine work and family. In addition to guaranteeing childcare for all children in need by 2013, Merkel -- with the help of her former family minister, Ursula von der Leyen -- also expanded parental-leave rights and introduced significant government stipends to help new mothers (and fathers) take time off when the child arrived.

But the charges are not without substance. Following her 2009 re-election, Merkel moved the highly successful von der Leyen over to the Labor Ministry and replaced her with Kristina Schröder, who was 32 at the time. Since then, Schröder has waged a public running battle with some of Germany's most widely respected feminist voices. This spring, she went even further, publishing a book that essentially declares the dawning of a post-feminist era.

The public's reception of that book was on full display in mid-April, when Schröder held a reading in a Berlin neighborhood widely, if not entirely accurately, considered to be the country's most fertile zip code. Full of successful working parents, the quarter, called Prenzlauer Berg, is a place that makes German family policy look like a runaway success story.

Schröder's book is called "Danke, emanzipiert sind wir selber!" -- or "We're emancipated on our own, thank you very much." In it she writes: "Never were women in Germany as free as they are today, but in the ideological trenches of the 1970s sit all manner of dogmatists who publicly pass judgment on the results of this freedom." One chapter is called: "The world has changed -- the feminist worldview has not."

The reading in Prenzlauer Berg didn't go well, preceded by a raft of critique on Twitter and accompanied by heckling. Afterward, SPIEGEL reported at the time, Schröder muttered to an adviser, "I didn't think it would be so bad."

Much of the critique of Schröder comes from the perception that she is declaring as dead a movement that made her own biography possible in the first place. She was first elected to the German parliament in 2002, at the ripe old age of 25. In 2009, she completed her Ph.D. and was named to Merkel's cabinet that same year. Since taking over at the Family Ministry, a portfolio which also includes women's issues, she has married and had a daughter, becoming the first cabinet member in Germany to ever give birth while in office. She wrote the book while on parental leave.

Schröder's book was not her first foray into post-feminism. In 2010, she waged a highly public media battle with Germany's grande dame of feminism, Alice Schwarzer. In an interview with SPIEGEL, Schröder claimed that "early feminism" had failed to recognize "partnerships and children produce happiness," and that feminists saw homosexuality as "the solution to the disadvantaged position of women." In character, Schwarzer fired back, saying among other things that Schröder was "simply unfit for her office."

Schröder's ministry, though not responsible for conceiving the unpopular childcare allowance law, has been tasked with writing it, adding to the perception that the minister harbors a backward view of women's role in society.

There are, however, plenty of other issues as well. For one, Schröder has been adamant in her refusal to consider legally mandated gender quotas for senior positions at German companies. That there is a need for such quotas seems beyond doubt. According to the German Institute for Economic Research, a paltry 2.2 percent of leadership positions in the country's top 100 companies were held by women in 2010 -- just 11 out of 490. Schröder, though, has promoted a system whereby companies would voluntarily commit themselves to a quota they deem suitable. The minister has been widely criticized as a result.

Schröder has also been accused of turning a blind eye to the fact that the gap between men's and women's salaries is wider in Germany than in every other country in Europe.

The childcare allowance battle, however, belongs almost exclusively to Merkel, and it is the chancellor who has taken responsibility for pushing the law through parliament. Despite the Tuesday evening meeting, German news agency DPA reports that several conservative parliamentarians remain opposed. Given that the center-left opposition in parliament is intent on voting against the bill, it is a rebellion that Merkel can ill afford.

The chancellor now plans to meet with conservative female parliamentarians on Thursday in an attempt to convince the skeptics. Should she be successful, the debate over the state of feminism in Germany promises to become even bitterer.