She brought flowers. Standing in the doorway, Christiane Felscherinow removes dahlias, asters and sunflowers from the wrapping paper as though she's been invited to coffee. Her green eyes are carefully lined, her boots are freshly polished and she looks put-together in her plaid blouse. Only her hands seem to contradict this neat appearance. They are covered with a web of small scars, the traces of countless needle wounds.

Felscherinow is here to promote herself. Dozens of people are keen to speak with her at a meeting in the offices of Levante, a small Berlin publishing house releasing the sequel to her biography this week. The 1979 book and subsequent film, "Christiane F. -- Wir Kinder vom Bahnhof Zoo," or "Christiane F. -- We Children from Zoo Station," made her Germany's most famous heroin addict. Her story, a bestseller when it was published 35 years ago, introduced the German public for the first time to a world that remains shocking today -- one in which children living in West Berlin systematically destroyed their bodies and souls with drugs.

"Hardly anyone at the time would have believed that I would still be here today," she says. She seems lost in thought, and not triumphant in the least. Sitting on a large leather sofa, her voice sounds tense.

Felscherinow was 12 when she tried hashish for the first time. She had moved on to heroin by the time she was 13, and at 14 she was prostituting herself. An alert and intelligent child, she had moved from a village in the countryside to Berlin and its anonymity. Her mother was overwhelmed and her father was an alcoholic. Eventually the family fell apart. At 15, she saw a glimmer of hope when she started a new life in a small city, where she lived in her grandmother's strict household. But she still isn't drug-free today.

Almost five million copies of her story were sold. The book was required reading in German schools, and producer Bernd Eichinger turned it into a film. But after so many years, why is Felscherinow, now 51, telling her story again? She is seriously ill with hepatitis C, and the infection is destroying her liver. Is it her aim to warn others about drugs and their devastating effects?

"No," she says, speaking with a thick Berlin accent. "No, there's no message. It was just that I wanted to make a counterstatement. There was all that junk, all the headlines!" For many newspapers, her relapses were always worth at least a few columns. "I finally wanted to describe what it was really like," she says.

Felscherinow spent three years working with the book's co-author, Sonja Vukovic, recording conversations and reconstructing memories. They are the memories of a woman who, in describing herself, says: "As a junkie, you're constantly deceiving yourself more than anyone else." They are also the memories of a person who still uses drugs regularly to escape reality, drugs that alter personality and harm the brain.

"What bothers me most of all is this Christiane F. thing," she continues. "Is she finally clean now, or not? As if there is nothing else to say about me. And I can't get clean. It's just what everyone else has always expected of me." She shakes her head emphatically and then runs her hand over her chestnut-red hair.

Her gestures are forceful and she looks muscular and slim. In this moment, little indicates that this woman's body is being decimated by pills and plenty of alcohol. She smoked two joints in the morning, she says. She has also been taking methadone for about 20 years, like 75,000 other drug addicts in Germany. Despite the methadone, she says that there are times when she throws caution to the wind and buys a few grams of heroin. This happens when she feels she can no longer cope with the stresses of the outside world.

"The doctors complain. But I do have a life, after all. And I'm not clean, just as all the others aren't clean, either," she says. "I study the faces I see on the subway every day. Everyone is trapped, somehow."

Perhaps this perspective makes it possible to endure a life like hers. At any rate, the hopes that came with being subjected to her grandmother's strict regimen at 15 remain unfulfilled. She has gone through countless withdrawals and had countless relapses. She was convicted on a drug offense and spent 10 months in a women's prison. She had several abortions and failed relationships. She dropped out of a training program in bookkeeping, spent seven years in Greece without a permanent home, contracted hepatitis C and has few friends today, although many people are all too willing to write about her when profit is involved. She no longer has a relationship with her mother, by whom she felt misunderstood.

She hears voices sometimes, she says, and she sees silent men wearing dark clothing and other evil forces in the hallway of her building. On days like that, she becomes so anxious that she leaves her apartment outside Berlin and goes to a homeless shelter. She lost custody of her son, whom she loves, when he was 12. He has been living with a foster family since then. A social worker spent three years trying to help her.

And yet, almost magically, her life has also been filled with flashes of glitz and glamour, a life in which copious amounts of champagne, money, parties and traveling have played a significant role. At 18, she had already earned about 400,000 deutsche marks in royalties from her book. She was in love with Alexander Hacke, the guitarist with the German industrial band Einstürzende Neubauten. She met David Bowie and Nina Hagen, and she also recorded her own records. When Eichinger's film about her life premiered in the United States, she traveled to Los Angeles and became a cult figure, a junkie princess.

She met the couple that owns the Diogenes publishing house in Zürich, and for three years she was a regular guest at their house, where she was treated like a foster daughter. She sat next to the late Swiss author Friedrich Dürrenmatt at dinner parties, visited director Federico Fellini in Rome and went hiking in the mountains of Sils Maria with the German humorist Vicco von Bülow (better known as "Loriot"). But there were also times when she would join the addicts at the Zürich train station. Still, her publisher friends refused to abandon her. The woman used to place a copy of every new release on her pillow in the evening.

She had many opportunities. "I did," says Felscherinow. "But the way I see it today, I always found that many things in life were boring. When I think about the past, I realize that Zürich is one of my fondest memories. I should have gotten my act together plenty of times back then."

A door opens and a tawny Chow-Chow pushes his way through the opening. Perhaps the only constant in her life is that she has always had a dog at her side. The dog stops in front of his mistress, and she laughs. "Leon wants to know how much longer this is going to take," she says, as she pulls a cigarette out of her bag. She has trouble concentrating, and she needs to conserve her energy for later when she autographs copies of her new book's "fan edition," which was expanded to include drawings and photos.

Fans? "Yes," she says. "Probably about a million."

It may seem strange, but there are fans of her uninhibited life around the world. They admire her for her perseverance, suffer along with her, tweet and post messages, test their knowledge about "Christiane F." in online tests and collect first editions of "Wir Kinder vom Bahnhof Zoo."

The fate of an unhappy girl has influenced the lives of her fans. Her story has served as a warning for many, who have shown their gratitude in letters to Felscherinow. But some have also imitated the things they read.

It is a balancing act, particularly for the young team at Levante. The publishing house has specialized in a bimonthly magazine that addresses issues related to the Middle East and the Islamic world. Now they are handling a book project for the first time, and one that is highly sensitive. While they know that the myth has to be upheld to turn the book into a financial success, they have to be careful not to idealize the drug-addicted author or her lifestyle. This would also be irresponsible to her. She already lives with the dilemma that the addiction that threatens her existence is also the most important chapter in her life. She still earns close to €2,000 ($2,720) a month in royalties from the first book and the film. She abandoned her anonymity at the time, even though the co-authors, two journalists with the German magazine Stern, warned her against going public.

Worship the High, Despise the Addict

Today, Felscherinow craves the recognition of an audience, although she has trouble coping with negative headlines. It's her drama, and one that she, both a celebrity and an addict, is constantly stoking. She makes a concerted effort to be friendly, she says. But when she feels resentful, she shouts at whomever she pleases. Sometimes she simply starts shouting, on the street or while shopping, when things don't go the way she had imagined.

The team at the publishing house tries to protect her. They are even considering a Christiane F. foundation, which would advocate for people like her. After working with her for three years, they have realized that it is unrealistic to always expect addicts to give up drugs altogether. In fact, they say, our society is hampered by an odd sense of incongruity on the issue -- many worship the high but despise the addict.

"The break is over," says Felscherinow, putting out her cigarette. Then she talks about her son, who is now 17. For the first time this afternoon, she sounds enthusiastic. He is bright, strong and friendly, she says, but most of all, he is remarkably levelheaded. She talks about him for almost half an hour, and then closes her bag.

As she leaves, she says that her son is somehow very different from his mother -- and that perhaps it's a good thing. 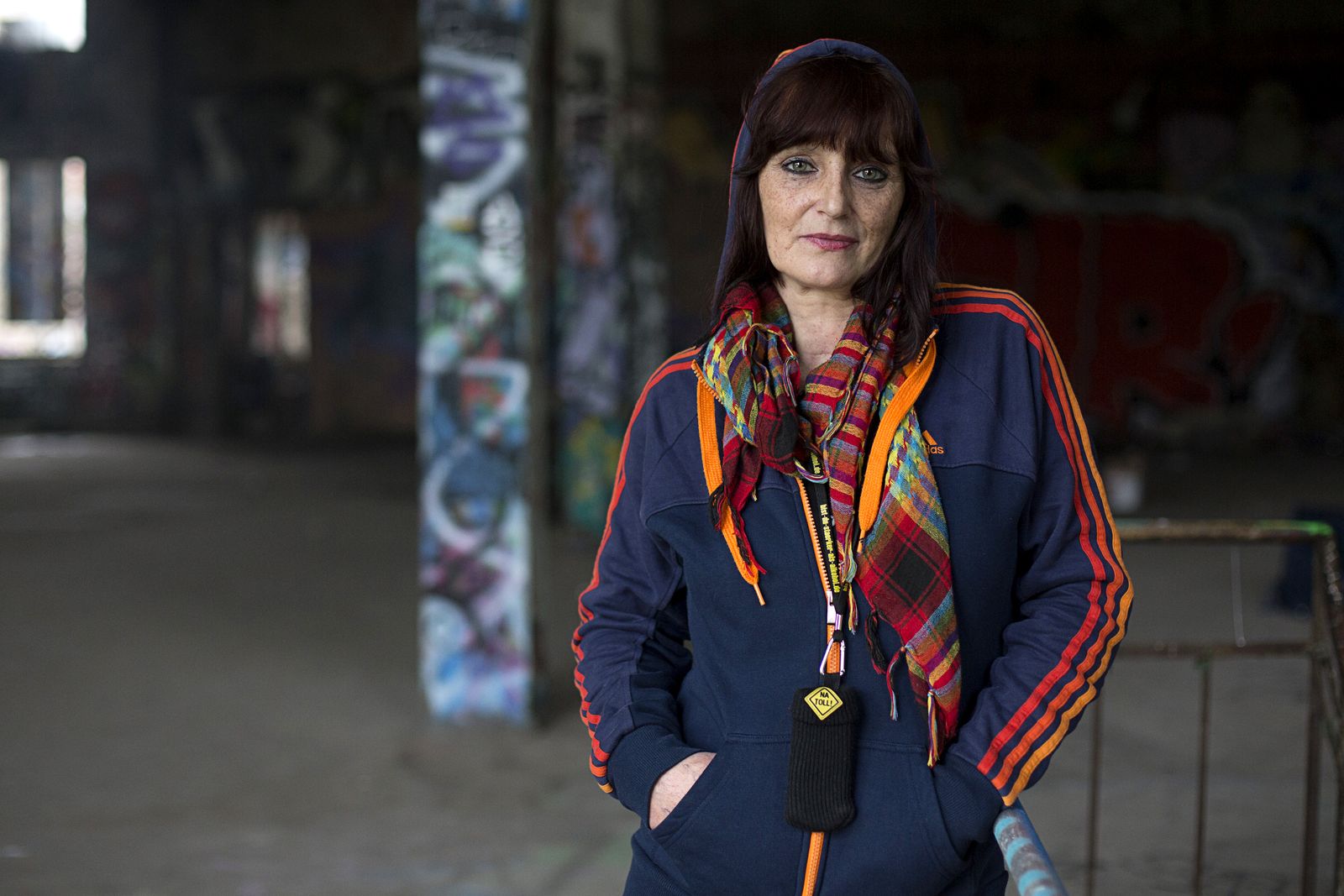 'Hardly anyone at the time would have believed that I would still be here today,' says Christiane Felscherinow of her teenage years.