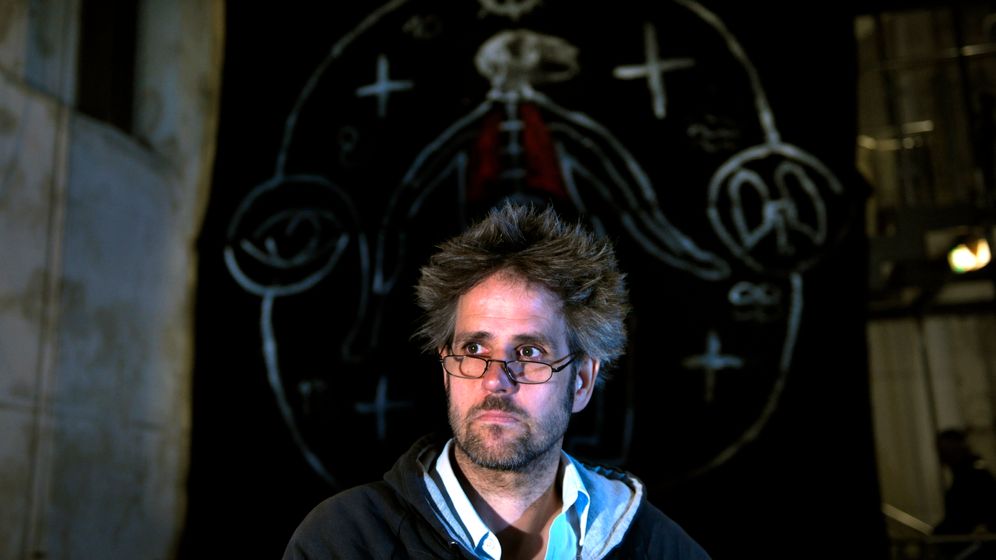 Photo Gallery: A Man Who Left His Mark on Modern German Culture

Theater and film director Christoph Schlingensief, who is widely considered one of the most important figures in contemporary German theater, died of cancer on Saturday. Artists and politicians alike praised the director as "one of the true greats," someone who "shook awake" the country.

The German government's commissioner for culture and the media, Bernd Neumann, said that the cultural scene had lost one of its most multifaceted and innovative artists -- a man who had a strong influence on the worlds of film and theater. Berlin Mayor Klaus Wowereit emphasized how closely linked Schlingensief's name was with theater in the capital city, saying, "a great man has left the stage." The president of the Berlin Academy of Arts, Klaus Staeck, called Schlingensief an artist of "enormous power, both artistically and politically." Elfriede Jelinek, the Austrian recipient of the 2004 Nobel prize for literature, described the director as "one of the greatest artists that ever lived."

On Saturday, Schlingensief's family informed the management of the Ruhr Triennale festival in Mülheim, where the director had recently had to cancel his latest production, of his death, and a spokesperson for the festival confirmed the director's passing to the press.

In two months time Schlingensief, who had been diagnosed with a particularly agreessive form of lung cancer in 2008, would have turned 50. At the beginning of July he was forced to cancel his latest theater piece, "S.M.A.S.H - Suffocating in Aid," after receiving renewed diagnoses of cancer. In a May interview he said that he had known for months that he had new tumors. The cancer "had destroyed everything."

Nonetheless, he continued to work on his memoirs until he was no longer able to: The planned publication date was Sept. 23, one month before his Oct. 24 birthday. But in July his publisher said the deadline would have to be pushed back, and the future of the project is now uncertain. Early last year, the stricken director attracted considerable attention when he published his cancer diaries.

Schlingensief is one of the most controversial figures on the German-speaking cultural scene and certainly the best-known theatrical provocateur. His name was also known by those who did not regularly attend opera and theater. And critics were undecided as to whether he was simply contentious for the sake of it or whether he should be seen as one of the "last German moralists."

Schlingensief went beyond the boundaries of theater, into the political sphere, gladly and often. One infamous example occurred in 1997, when at the important five-yearly Documenta contemporary art exhibition in Kassel, Schlingensief contributed a poster with the message: "Kill Helmut Kohl," a reference to the chancellor of Germany at the time. Schlingensief was arrested as a result.

The son of a pharmacist father and a pediatric nurse mother, Schlingensief grew up in what he described as a lower-middle class home in the city of Oberhausen in the industrial Ruhr region. He found his way to the art scene early. After two unsuccessful applications to the University of Television and Film in Munich, he began to study German language and literature, philosophy and art history before abandoning his studies after seven semesters. Schlingensief later recalled his work as a production manager on one episode of the television series "Lindenstrasse," one of the first German soap operas, as a "ghastly experience." And in 1988 he produced the television film, "Sheep in Wales," for the German public broadcaster ZDF.

But his career as "provocateur on duty" really began with films like "100 Years of Hitler" -- which Schlingensief's website describes as a "wild take on the demise of Hitler and his followers" inside Hitler's bunker -- and "The German Chainsaw Massacre." In the latter Schlingensief depicts the first days after the reunification of Germany as a sort of "national blood letting." In the film, news of the fall of the Berlin Wall sparks an unrestrained and bloodthirsty frenzy by a West German family of butchers, who murder countless East Germans.

The film attained cult status. "It calls Helmut Kohl's reunification to account and is a successful answer to the boredom of German film," wrote the Süddeutsche Zeitung daily. Former Chancellor Helmut Kohl was a favorite target of Schlingensief's. During the 1998 federal elections he founded a political party of his own, Chance 2000, to represent non-voters, the handicapped and other minorities. Schlingensief drew attention to himself by inviting the 4 million people who were unemployed in Germany at the time to go swimming in the Wolfgangsee, a lake in the Salzkammergut resort area in Austria, at the same time. Had they done this they would have flooded Kohl's holiday destination.

During the 1990s, Schlingensief was one of the in-house directors at the well-known Volksbühne Theater in Berlin under artistic director Frank Castorf. His films -- like 1992's "Terror 2000 - Intensive Care Unit Germany" and television's "Talkshow 2000" -- became legendary, along with his works for theater, his performance art and his installations. Works like "100 Years of the CDU," (the Christian Democratic Union party currently led by German Chancellor Angela Merkel), "Rocky Dutschke, '68" (a play on German 1968 student leader Rüdi Dutschke), "Passion Impossible - 7 days of Emergency for Germany" in Hamburg and "Hamlet" in Zurich became well known. One of his films, "United Trash," even screened at the Cannes Film Festival.

In 2004, Schlingensief staged an opera for the first time at the annual Bayreuth Festival in Bavaria, which honors works by 19th century German composer Richard Wagner. Although no other piece excited quite as much interest -- Schlingensief fought with the festival establishment and put a dead hare on stage -- there was no major scandal. "Schlingensief was here, but Bayreuth is still standing," a critic in the weekly Die Zeit wrote afterwards.

'Heaven Could not Be as Beautiful as Here'

In 2008, when he was first diagnosed with cancer, the director withdrew from public life. Only months later, however, he returned, providing reports on his illness and its consequences in a series of interviews. At the same time he also began working again, although now his work had much more to do with his cancer and his mortality. In 2008 at the Ruhr Triennale, an annual arts festival in the state of North-Rhine Westphalia, he presented "Church of Fear," -- the full German title was "a church for the fear of the foreign within me," and in 2009, "Mea Culpa -- A Ready Made Opera," at Vienna's Burgtheater. In both pieces, Schlingensief addressed existential fears. Schlingensief also published a book: "Heaven Could Not Be As Beautiful As Here: A Cancer Diary."

In 2009, Schlingensief served as a member of the jury at the Berlin International Film Festival. And, in May, he staged another opera, "Via Intolleranza II" by Italian composer Luigi Nono, in Brussels and in other locations. He also accepted the post of curator for the German pavilion at the 2011 Venice Biennale. He had also planned to stage and direct the opera "Metanoia" on the occasion of the re-opening of the Schiller Theater in Berlin, which would act as a temporary venue for the Berlin State Opera (Staatsoper) company.

According to many, his desire to set his legacy in stone was manifest in a development project in Burkina Faso, one of Africa's poorest countries, that if completed would include an opera house, a school providing music and film lessons for 500 children and an infirmary. Schlingensief called the project "Remdoogo - The Opera Village," and the foundation stones for the Festival Hall of Africa were laid in February.

Schlingensief seemed to want to fight his deadly illness by taking on ever more projects and jobs. In August of 2009 he married costume and set designer Aino Laberenz and even let it be known that the couple wanted to have children.

This week Schlingensief's dramatic premonition about his own illness is being quoted over and over again. While he was working on his staging of Wagner's "Parsifal," in Bayreuth, the work he staged there controversially in 2004, he told the press that the process would give him cancer. Discussing this in an interview with SPIEGEL in 2008, Schlingensief said: " Everyone who has cancer asks himself questions like that. Some brood over whether they smoked too many cigarettes or drank too much red wine. I ask myself whether I felt too much of an affiliation with death in my art."

But it won't be Schlingensief's arias of worldly woe that leave the most memorable mark on Germany's cultural scene, one SPIEGEL cultural critic wrote. Nor will it be the facelift he gave to Bayreuth's operatic world with his production of "Parsifal" in 2004. His bloody films and his untamed theater productions won't offer the most lasting consequences either. The biggest impact will come as a result of the director's "nonsensical genius," with which he shook up a staid German culture scene.