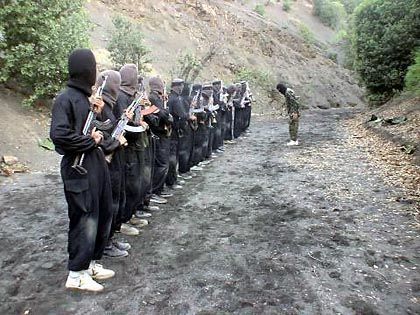 The IJU in training. The group has threatened to launch attacks in other countries.

The German government is taking seriously claims by a militant Islamic group that it was behind a foiled terror plot. The Interior Ministry said Tuesday that an Internet announcement by the Islamic Jihad Union (IJU) that it had plotted to bomb US and Uzbek targets in Germany was being treated as genuine. Three men were arrested on Sept. 4 in Germany on suspicion of planning to attack US and other facilities.

Now the authorities know that the specific targets were the US military air base at Ramstein and US and Uzbek consular facilities in Germany, and that the attacks were to have been carried out at the end of 2007. The aim of the planned bombings was to put pressure on Germany to close its air base at Termez, Uzbekistan, near the Afghan border. The base provides logistical support to the 3,000 German soldiers serving with NATO forces in the Afghanistan.

The IJU message was published at around 5 p.m. C.E.T. on Tuesday on a Web site that has been used by the group before. German intelligence agents quickly translated the announcement, which was in Turkish. According to SPIEGEL ONLINE sources, the document says that the United States and Uzbekistan had been targeted because of their "injustice and brutal policies toward Muslims and Islam." It also warned that other attacks were being planned outside of Germany: "What the three brothers intended to do is also being planned in other places in the world."

The IJU is listed as a terrorist organization by the US State Department and is described as an off-shoot of the Islamic Movement of Uzbekistan. It is thought to have been behind the 2004 bombings directed at the US and Israeli embassies in the Uzbek capital, Tashkent. Uzbek militants have been establishing a presence in northern Pakistan in recent years.

The three suspects arrested last week -- Fritz Gelowicz and Daniel Schneider, both German converts to Islam, and Adem Yilmaz, a Turkish man living in Germany -- are all thought to have trained in camps in Pakistan and to have formed an IJU cell in Germany.

Anti-terror investigators had been monitoring the men for months after the CIA alerted the German authorities in autumn 2006 to a possible plot after intercepting emails between Pakistan and Germany. Hundreds of police officers were involved in one of the biggest surveillance operations in post-war German history.

The authorities knew that the men were living in a rented vacation house in the village of Oberschledorn and had obtained 730 kilograms of 35-percent hydrogen peroxide, enough to make massive bombs. But when local village police stopped the suspects for a traffic violation, they became jittery. The authorities decided it was time to move in and arrest the three men.

US intelligence officials testified before the Senate on Tuesday that they had assisted the German authorities in detecting the threat. Director of National Intelligence Mike McConnell said that a controversial US program to intercept suspects' communications had "made significant contributions" to the investigation in Germany.

The successful thwarting of the plot has led to a debate about the extent to which anti-terror legislation in Germany needs to be ramped up. Leading members of the two parties in the coalition government, the Christian Democrats (CDU) and the Social Democrats (SPD), met on Tuesday to discuss the country's response to the terror plot. However many politicians, including Justice Minister Brigitte Zypries, an SPD member, are unhappy with a controversial proposal from the Interior Minister Wolfgang Schäuble to introduce online searches of suspects' computers.

According to the German daily Süddeutsche Zeitung, security experts briefed the meeting about the investigation. They said that they had only been able to intercept a small part of the communications between the alleged terrorists and therefore are still not sure how the three suspects managed to transport detonators to their hold-up in Germany.

The fact that two of the terror suspects were German has raised fears of home-grown terrorism and led for calls for increased monitoring of converts to Islam.

Deputy CDU floor leader Wolfgang Bosbach has even called for a register of all converts to Islam. He told the Bayerische Rundfunk radio station on Tuesday that this would make sense "as we know that some who convert become radicalized. That does not mean a general suspicion, just a defense against danger."

The chairman of the Central Council of Muslims, Ayyub Axel Köhler -- a convert himself -- warned against overreacting. "Where would the country drift towards if there were a converts register?" he said, adding that Muslims were "reliable partners in word and deed in the fight against terrorism."

With reporting by Yassin Musharbash and Matthias Gebauer.