Since the world's oceans are so massive, few people seem to have a problem with dumping waste into them. But plastics degrade at very a slow rate, and huge amounts of them are sloshing around in our oceans. Wildlife consumes small pieces causing many of them to die, since the plastics are full of poisons. And, as experts warn, we've reached a point where it's even getting dangerous for humans to consume seafood.

Given these conditions, the international community has been pushing for four decades for massive bureaucratic efforts aimed at clearing the oceans of waste. In 1973, the United Nations sponsored a pact for protecting the oceans from dumping. Additional provisions have been added to the so-called Marpol Convention -- short for "marine pollution" -- on six different occasions. And nine years ago, the European Union put directives on the books that forbid any dumping of maritime waste into the ocean while in ports. 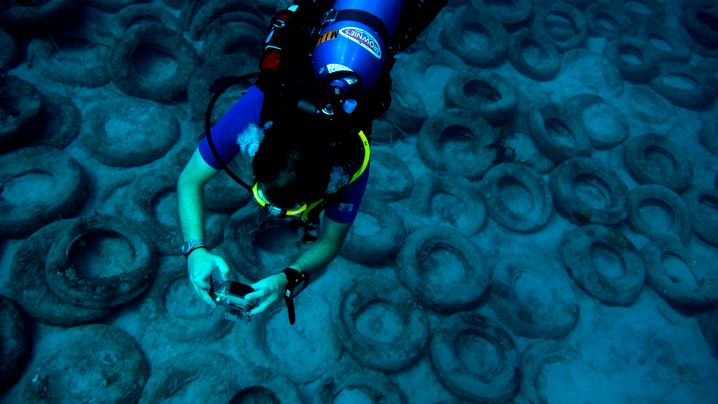 Photo Gallery: Our Oceans Are Choking with Trash

Still, according to a classified German government strategy paper obtained by SPIEGEL ONLINE, if you add up all the good such measures have done, you still end up with zero. In fact, according to the confidential paper, international efforts aimed at protecting the oceans have failed across the board. Our oceans have devolved into vast garbage dumps.

Even strict laws have yet to do anything to help the oceans, the paper states. Take the case of the North and Baltic seas. Although dumping into them has been illegal since 1988, the amount of waste found in these seas has still "not improved." The government also estimates that, each year, 20,000 tons of waste finds its way into the North Sea alone, primarily from ships and the fishing industry. The paper concludes that all related international agreements have been "unsuccessful."

Stuffing Waste in the 'Blue Closet'

At first glance, it might look like the European Union is doing a lot to clear the seas of waste. For example, the most recent EU directive on this issue, from July 2008, aims at guaranteeing the "good condition" of Europe's seas by 2020. Moreover, on Tuesday, the European Commission announced its intention to set up "a dedicated agency  to tackle the underlying problems of poor implementation and enforcement of European waste legistlation."

Still, the German strategy paper doesn't put much faith in such plans. As its authors see things, it is "extremely unlikely" that an effective consensus on not polluting the oceans will emerge in the foreseeable future. In fact, the government's experts appear to believe that hammering out new international agreements is not the right way to approach the issue. Instead, they believe that the practicality of future pacts aimed at protecting the oceans should "be investigated beforehand."

In public, though, Germany's federal government assumes much less caustic tones. In April 2008, the then-ruling grand coalition -- made up of Chancellor Angela Merkel's center-right Christian Democratic Union party and the center-left Social Democratic Party -- declared that it viewed existing regulations aimed at containing the flood of waste as "in principle sufficient." Germany's Federal Ministry for the Environment, Nature Conservation and Nuclear Safety declined to provide any additional comments to SPIEGEL ONLINE on Thursday.

Environmental protection advocates, on the other hand, are not shy about voicing their dismay. "In the absence of controls and penalties," says Onno Gross, the president of Deepwave, a Hamburg-based ocean conservation organization, "it's apparently tempting to get rid of your waste in the 'blue closet.'" Still, according to the internal government paper, disposing of maritime waste in a proper fashion isn't easy as it needs to be. As the paper's authors see it, "insufficient disposal opportunities in ports, high fees and complicated logistics" frustrate such efforts.

Still, they'll also admit that putting a stop to further pollution is urgently necessary. The government experts behind the report note a "worsening ecological and economic problem" that will have negative effects on maritime animals as well as "immense costs."

They also warn of serious health-related consequences for humans. For example, plastic particles could completely throw off our complex hormonal balance, according a study published last year by scientists at Berlin's Charité University Hospital. Likewise, according to Richard Thompson, a marine biologist at the University of Plymouth in Great Britain, pieces of plastic can moonlight as poison traps in which insoluble cancer-causing substances, such as DDT, embed themselves. In fact, the most recent study puts the concentration of such poisons on these bits of plastic as being a million times higher than normal. And, as Gross warns, "When people consume fish, they bring the poison into their own bodies."

When Thompson looks at this problem, he worries about the chances of there being a dangerous chain reaction. The higher an animal is in the food chain, the more poison it is likely to have in its body. Scientists are currently looking into just how much poison humans ingest when they eat things that come from the ocean.

Birds often have a hard time distinguishing between little pieces of plastic and food. According to a study conducted in 2002, 80 percent of the birds examined along the North Sea had plastic particles in their mouths. Likewise, researchers at the Research and Technology Center Westcoast based in the northwestern German town of Büsum have recently determined that almost all (93 percent) diving birds on the North Sea have pieces of plastic in their stomachs.

Yet another study found an average of 32 pieces of plastic in the stomachs of northern fulmars, a relative of the petral. With all these pieces in their stomach, the birds always feel full, so they consume less, get fewer nutrients and, in many cases, die. A panel of experts told the EU that migratory birds feed pieces of plastic they find in the Atlantic Ocean to their young in Antarctica.

According to the United Nations Environment Program, there are, on average, some 18,000 visible bits of plastic floating on every square kilometer of sea. Some knots of floating trash are even visible on satellite photos. Researchers from the Algalita Marine Research Foundation tested 11 randomly chosen sites in the middle of the Pacific Ocean and found that the mass of plastic was six times greater than the mass of plankton. Plastic does, over time, disintegrate into ever smaller pieces. But it takes centuries to break down completely.

The North Sea Floor Is Saturated with Plastic

Along the beaches of the North Sea and the North Atlantic, according to the government report, some 712 pieces of garbage can be counted on each 100 meter stretch, on average. Some stretches contain up to 1,200 pieces. "It's not enough just to sweep the beaches every now and then," says marine biologist Gross. Indeed, up to 67 percent of the trash sinks to the sea floor. Under the waters of the North Sea lie 600,000 cubic meters of junk, according to official calculations -- roughly the volume of two of the pyramids of Giza. Every square kilometer of North Sea floor contains a square meter of garbage.

There is no shortage of suggestions on how to tackle the problem. The strategy paper from the German government proposes starting small. First of all, it says, criteria for a healthy sea should be worked out and sea life should be better researched to correct the "diffuse state of our knowledge." The question as to whether standard research methods are enough remains a "problem without a satisfactory solution."

But the government also has some concrete measures it would like to see implemented. "Strong garbage sacks" should be distributed to fishermen so that 500 of them can serve as North Sea garbage collectors. The government report also points to unmoored fishing nets as a major problem that sea life in the North Sea faces. The strategy paper advises an evaluation as to whether fishing nets should be outfitted with locator devices in the future.

Recycling systems should also be promoted onboard ships, the paper proposes. Garbage separation is also desired -- but not garbage presses, because then the garbage "can no longer be identified." "Stricter controls and higher penalties," should also be introduced.

"Garbage log books would finally give us an insight into the actual amount of garbage produced, says Onno Gross of Deepwave. A standard container ship produces some 100 kilograms of trash per day. Should ships dispose of suspiciously small amounts of garbage when they reach harbor, they should be forced to pay "drastic penalties," Thilo Maack of Greenpeace says.

Gross proposes using port fees to finance garbage disposal. "The system that one tends to find at camp grounds should be used in shipping as well," he says. But the German government does not have high hopes for improvement. The paper argues that garbage disposal must remain free of charge if one hopes to change the behavior of sailors.

6 Bilder Photo Gallery: Our Oceans Are Choking with Trash