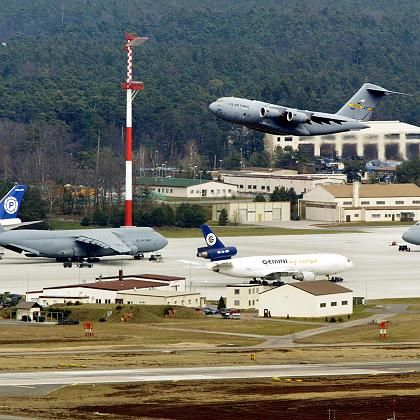 No more nukes at Ramstein?

For years, the US nuclear weapons arsenal at the Ramstein Air Force base in Germany has been something of a political bone of contention. Now, though, the Americans may have removed them with hardly a peep. According to a list handed out to US weapons inspectors, the arms may have been removed bombs may no longer be stationed there.

"I think it is fairly certain that they are gone," Hans M. Kristensen, director of the Nuclear Information Project at the Federation of American Scientists in Washington, D.C., told SPIEGEL ONLINE. "There are too many things which indicate that they are gone. This fits very nicely."

The Federation of American Scientists, or FAS, conducts regular inspections of US nuclear facilities. It periodically receives a list from the Air Force of bases to be inspected, and the latest list -- from January 2007 -- failed to include Ramstein, which was still included in 2005. Another base in Germany, at Büchel, remains on the list, along with bases in Belgium, Italy, Turkey, the Netherlands and the United Kingdom.

About 350 American nuclear warheads remain in Europe. Up to 130 additional warheads had been stored at Ramstein, but DER SPIEGEL reported in 2005 that the arsenal was cleared during renovation work, and it's possible they never came back to Germany.

Neither the German defense ministry nor the Pentagon will discuss the status of those bombs. The Pentagon, as a rule, never comments on "the number or position of the US military's nuclear weapons." But Kristensen said the list counted as evidence. "This means that the weapons are gone," he said. "They are not allowed to store weapons without this security process and no security process means they are gone ... That is the best evidence you can get in this business."

During the Cold War the number of US warheads stationed in Europe was in the thousands; the estimated number reached a peak of about 7,000 in 1971. Some bombs could be mounted on American as well as allied planes in case of war. It became US policy during the Cold War to let NATO allies like Germany "participate" -- under US command -- in the deployment of nuclear weapons. Even before the Cold War ended, though, many nuclear weapons were pulled out of Europe.

In 2005 two German politicians, then-Defense Minister Peter Struck and then-Foreign Minister Joschka Fischer, formally asked NATO why American nuclear weapons had to remain in Germany. A groundswell of popular protest followed, but nothing seemed to result -- in fact Fischer and Struck backed down from their public positions. Now it seems possible that the US removed the weapons anyway.

An estimated 20 nuclear bombs remain underground at Büchel, another Air Force base in the German state of Rheinland-Pfalz. They can be mounted on German Tornado fighters, but not on the planned Eurofighter, a European-built plane which may replace German Tornados starting in 2013.