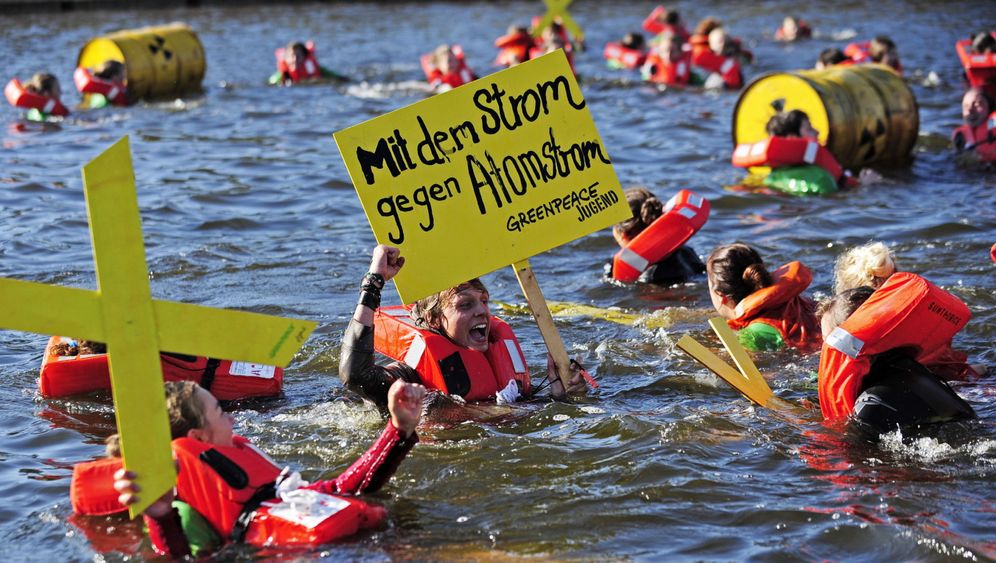 It could be just like the good old days. This Saturday, thousands of anti-nuclear energy protestors, traveling on buses and chartered trains from all over Germany, plan to converge on Berlin. They'll be handing out flyers and holding up signs and banners, and making as much noise as possible. The city's residents may even see a handful of old VW buses plastered with old red-and-yellow "Nuclear power? No thanks!" stickers leftover from the 1970s, the heyday of atomic protests.

The anti-nuclear movement is up in arms over plans by Chancellor Angela Merkel's government to extend the life spans of the country's 17 nuclear power plants. Renate Künast, floor leader of the Green Party in parliament, has warned the government that the move could trigger "a major social conflict," while Sigmar Gabriel, head of the center-left Social Democrats, is threatening to launch a constitutional challenge.

Merkel had hoped that reaching a speedy decision on the nuclear issue two weekends ago would quickly resolve an unpopular issue. But she may, once again, have miscalculated. Indeed, it appears that the government's compromise will spark an even more strident debate. Governors from Merkel's Christian Democrats and its Bavarian sister party, the Christian Social Union (CSU), are already demanding corrections to the new policy, the European Commission is threatening to require a review that could take months, and environmental experts from the CDU/CSU and from Merkel's junior coalition partners, the Free Democrats, are unhappy with the new policy, which they say has made too many concessions to the nuclear industry.

Only a few weeks ago, it looked as though the heads of nuclear power companies -- led by the CEOs of two major players in the industry, Johannes Teyssen of E.on and Jürgen Grossmann of RWE -- would emerge as the losers from the wrangling over the nuclear plants. Environment Minister Norbert Röttgen (CDU) was only willing to grant a moderate lifespan extension and had developed a long list of safety requirements.

But none of that will come to pass. Just prior to a key round of negotiations at the Chancellery two Sundays ago, Röttgen was forced into the realization that had no allies. Other important figures, including Economics Minister Rainer Brüderle, conservative floor leader Volker Kauder and Chancellery Chief of Staff Ronald Pofalla, are all opposed to Röttgen's position.

Even Foreign Minister Guido Westerwelle, who Röttgen had previously said was "irreparably damaged" has come out against the environment minister. And Chancellor Merkel, even as she was lobbying hard for new taxes to be levied on utility companies to boost government coffers, repeatedly spoke to the power company CEOs while largely ignoring Röttgen's concerns.

By early afternoon on Sunday a week ago, it was already clear that the environment minister would be forced to back down. One last time, Röttgen reiterated his proposal to require older nuclear plants to add an additional concrete shell to protect them against plane crashes. Unfortunately for Röttgen, however, experts in his own ministry had already admitted, during a meeting at the Chancellery three days earlier, that excessively high retrofitting costs would immediately render most nuclear plants uneconomical.

When the politicians parted ways at about 11 p.m., Deputy Finance Minister Hans Bernhard Beus and the power companies' chief financial officers got to work. At 5:23 a.m., they signed a workable preliminary agreement. Environment Minister Röttgen was kept out of the loop at first.

Even more damning was the coalition government's decision to keep the agreement under wraps because the negotiators were still ironing out the details. "It was stupid," says one member of the government, noting that the cloak-and-dagger approach would only spark suspicions among the public that the government had reached a secret agreement benefiting the power companies.

It turns out that those suspicions were not unwarranted. The agreement Merkel reached with the utility executives last week includes substantial concessions to the industry. "Sunday was a wonderful day," an energy industry lobbyist remarked after the meeting, which promised to result in windfall profits for the utilities in the medium and long term.

Under the new agreement, the government is guaranteeing the utilities about 1.8 trillion kilowatt hours of additional electricity from nuclear plants. Depending on the price of electricity, this corresponds to anywhere from €27 billion (about $34 billion) to €64 billion in additional revenues, according to calculations by the state-owned bank Landesbank Baden-Württemberg. The utilities will pay higher taxes until 2016, but then they will begin reaping enormous gains.

There is no fixed end date for the use of nuclear power in Germany. Instead, power companies will be able to transfer kilowatt hours from old nuclear power plants to new ones as they see fit, thereby potentially extending the life spans of the new plants past the middle of the century.

Until now, Röttgen has claimed that electricity generated by nuclear plants would only be allowed to be transferred from old plants to new ones. But this isn't true. The preliminary agreement guarantees the utilities that an exemption clause will continue to apply, whereby, with the government's approval, it will be possible to keep old nuclear plants connected to the grid by borrowing kilowatt hours from new plants.

Although the utilities will soon have to pay a planned fuel rod tax, it remains unclear as to how much additional money they will be required to pay into a government fund to expand renewable energy sources. The current plan places that figure at €1.4 billion in the period from 2011 to 2016.

The government is making astonishing concessions to the industry. For instance, the utilities' mandatory contribution to the alternative energy fund will be reduced should additional safety costs at a nuclear plant exceed €500 million. In other words, by spending more on nuclear safety they will be able to spend less on alternative energy.

The coalition also has major changes in store for Germany's Atomic Energy Act. To expedite construction of a planned nuclear waste storage facility in Gorleben in northern Germany, the government intends to provide regulatory agencies with additional leeway. Under the new bill, which the cabinet is set to ratify on Sept. 28, "expropriation is permissible" for the construction of permanent repositories for radioactive waste and site exploration. The former SPD/Green government had eliminated the government's ability to expropriate property owners.

It is not just the opposition that is up-in-arms over Merkel's nuclear policies. Dissatisfaction is growing within her own party as well. Conservative environmental politicians are calling for a review of lifespan extensions once every three years. And German states are also raising objections. The CDU/FDP government in the northern state of Schleswig-Holstein, which has had its fair share of problems with the accident-prone Krümmel nuclear plant, has complained that the federal government is unwilling to expand safeguards against plane crashes.

Schleswig-Holstein Governor Peter Harry Carstensen (CDU) has officially spoken out in favor of Berlin's decision. But according to the nonpartisan state Justice Minister Emil Schmalfuss, a member of the state's reactor safety commission, new safety measures are needed before plant life spans can be extended. If necessary, a few plants will have to be shut down until they can be retrofitted -- only then would they be approved to go back online.

The governors of other states with CDU-led governments are also voicing their demands. They want to have a say in how the promised utilities' contributions to the alternative energy fund are distributed. "States with nuclear power plants, like Baden-Württemberg, should also be involved in the decisions," says that state's governor, Stefan Mappus.

The retrofitting of the power grid alone will cost "sums in the double-digit billions, because the modern high-voltage lines running from north to south have to be moved underground," says Mappus. According to Mappus, the "political credibility" of the nuclear compromise will depend on "how much we do for alternative energies today."

His counterpart in Lower Saxony, David McAllister, is demanding more federal funding as well. He says that "fair compensation is needed for the (radioactive waste) repositories in the respective regions," that is, in Asse, Schacht Konrad and Gorleben, all of which are located in his state.

There is also trouble brewing abroad. Although European Union Energy Commissioner Günther Oettinger has no say on the lifespan issue, the situation changes when additional investments are made in the nuclear plants, as required under the new nuclear deal.

"If additional, substantial investments are to be made, from investments in new safety precautions to an expansion of an existing nuclear power plant, notification of the EU Commission is required," says Oettinger. This means that Brussels still has the power to confound Berlin's timetable.

Oettinger also plans to propose a bill in the coming weeks in which he will define parameters for the permanent disposal of nuclear waste. Some of the questions Oettinger intends to address are: "Which rock formations are feasible? What safety standards must be applied to construction and operation?"

Merkel's intention of resolving the nuclear dispute, it would seem, has failed completely. Only eight days have passed since the memorable showdown at the Chancellery and already there are mounting concerns among coalition politicians: How will the public respond to a deal that makes so many concessions to the industry? How threatening might discontent among conservatives ultimately become? And, most of all, how vehement will the anti-nuclear movement's protests be?

On the day the agreement between the administration and the utilities was made public, things were hectic in the Berlin office of the group organizing the planned major demonstration. The phones were ringing off the hook and volunteers were running through the hallways -- one was seen balancing an open pizza box on his laptop.

With just a few days left before the planned protest march, the organizers still don't even know exactly where the rally will take place. They are waiting to receive a list of conditions from the police. "We expect that we won't be allowed to use the lawn in front of the Reichstag," says Laura Eder, who began making preparations for the event at the end of June. "That's why we're planning two alternatives at the moment."

The number of anticipated protestors is also hard to estimate. The organizers have told authorities that they expect 30,000 people. But in late April, 100,000 protestors formed a human chain between the Brunsbüttel and Krümmel nuclear plants -- at a time when it wasn't even clear that the government would choose to pursue such a strongly pro-nuclear course.

Some 100 buses from across the country are expected, as are three chartered trains. Eder and her team are coordinating everything. They have already ordered vuvuzela horns in the hope that the crowd will make enough noise "to exert a lot of pressure, so that perhaps something will come of it, after all."