By 4:30 a.m. on Friday morning, after more than 15 hours of preliminary coalition talks which had been expected to end on Thursday, it was painfully clear that no agreement had been reached between Angela Merkel's center-right Christian Democrats (CDU), its Bavarian sister party, the Christian Social Union (CSU), the pro-business Free Democrats (FDP) and the Greens.

In the wake of the federal elections in late September, the parties have spent the last four weeks trying to reconcile their differences and reach a deal, which would pave the way for the start of formal negotiations. The three-way "Jamaica coalition," so-called because the parties' black, yellow and green colors are those of the Jamaican flag, would be the first such alliance in power in Berlin, and is already proving highly problematic.

Not even Merkel, who has a reputation for coming into her own as a nighttime negotiator, managed to convince all sides to strike a compromise. Talks were broken off and scheduled to resume at noon on Friday, with negotiators leaving the building of the German Parliamentary Society in the early hours of the morning looking bleary-eyed and exhausted.

Less than an hour earlier, just after 4 a.m., things had seemed to be looking up. Negotiators rushed up and down the stairs. But then they started leaving. The first to go, past the hordes of reporters gathered outside in the dawn drizzle eagerly awaiting an announcement, were the Greens - party leaders Cem Özdemir, Claudia Roth, Jürgen Trittin and Katrin Göring-Eckardt.

"The talks are going in to overtime," said Özdemir. How long they will last "depends on the referee," he told reporters, without stopping. He and his party colleagues looked weary and frustrated, and obviously were in no mood to chat.

The FDP and the CDU, at least, took the time to explain to the press why the talks had ground to a halt - although the reasons cited didn't correspond, not even among representatives of the same party. According to FDP leader Christian Lindner, significant progress had been made, and such a "historic project" was not going to fail just because it was going to take a bit longer. He stressed that negotiators had found a number of areas of agreement but were still at odds over others, such as immigration and financial policy.

Armin Laschet (CDU), governor of North Rhine-Westphalia, was less optimistic. "Regarding a number of issues, we reached understanding but no compromise. This is regrettable." The chancellor, meanwhile, merely gave the reporters a cursory "good morning" as she walked by.

The talks are now set to continue into Saturday and possibly also Sunday.

The Greens have already made it clear that they're under no time pressure, since the party's annual congress is not until November 25. The FDP is also in no hurry, with deputy leader Wolfgang Kubicki telling DER SPIEGEL on Thursday that he was of the opinion that "if we don't get anywhere tonight, we should take a few days extra to reach a sound and sensible agreement."

But this begs the question - will two extra days make any difference? "I'm extremely frustrated, " said Kubicki in the early hours of Friday morning.

The last phase of the talks begun on Thursday veered from grueling to dramatic, in terms of both content and atmosphere. The simmering tensions between the Greens and the CSU, in particular, were reignited. Although the negotiations are confidential, the parties haven't been hiding their differences from the press - in fact, it looks as though they're airing their grievances openly so they can blame each other in the event that the preliminary talks fail.

Insiders have also let slip to the press that negotiators keep returning to issues that were supposedly resolved, such as European issues and climate change. Financial issues are also proving highly divisive, with the FDP, for example, insisting that the proposal to reduce solidarity payments to eastern states by 8 to 12 billion euros within the next four years does not go far enough. The FDP would like to see the income tax surcharge, which was introduced over 25 years ago to help rebuild the states which once constituted East Germany, abolished completely.

'On Key Issues, We're No Further'

But, as expected, the issue causing the biggest headache is the refugee question, specifically, the question as to whether refuges who have been granted asylum should have the right to bring immediate family members to Germany as well.

The left-leaning Greens, on the one hand, and the CSU, which takes a hardline approach on the other, are failing to find much, if any, common ground on this issue. Growing animosity led to the talks actually being halted and the subject changed to finance. In general, the exploratory talks have been irregular, with issues sometimes discussed in small groups, sometimes in larger groups - and sometimes even on a one-to-one basis. None of these constellations have resulted in progress.

Still, the parties didn't spend the whole time arguing. While Merkel, Lindner, CSU leader Horst Seehofer, Göring-Eckart and Özdemir consulted for almost two hours behind closed doors, the other negotiators got to mingle. CDU politicians were spotted in the Green' office, apparently playing cards. Out of boredom, others counted square brackets - signifying points of contention - in the 62-page draft of the consultation paper. By daybreak, there were quite a few. And everyone tried to gauge facial expressions. At 2 a.m., the chancellor, it was rumored, "definitely smiled," according to one FDP insider.

But what happens next? "Regarding key issues we're basically no further along than we were four weeks ago, which is extraordinary," said Kubicki at 4:30 a.m. "We are confident that we can find agreement if we want to," said Peter Altmaier, Merkel's chief of staff.

The next round of exploratory talks will reveal whether they do want to. It now remains to be seen if going into overtime will help Germany's politicians do what's needed to start forming a government. If they don't, fresh elections will have to be called. 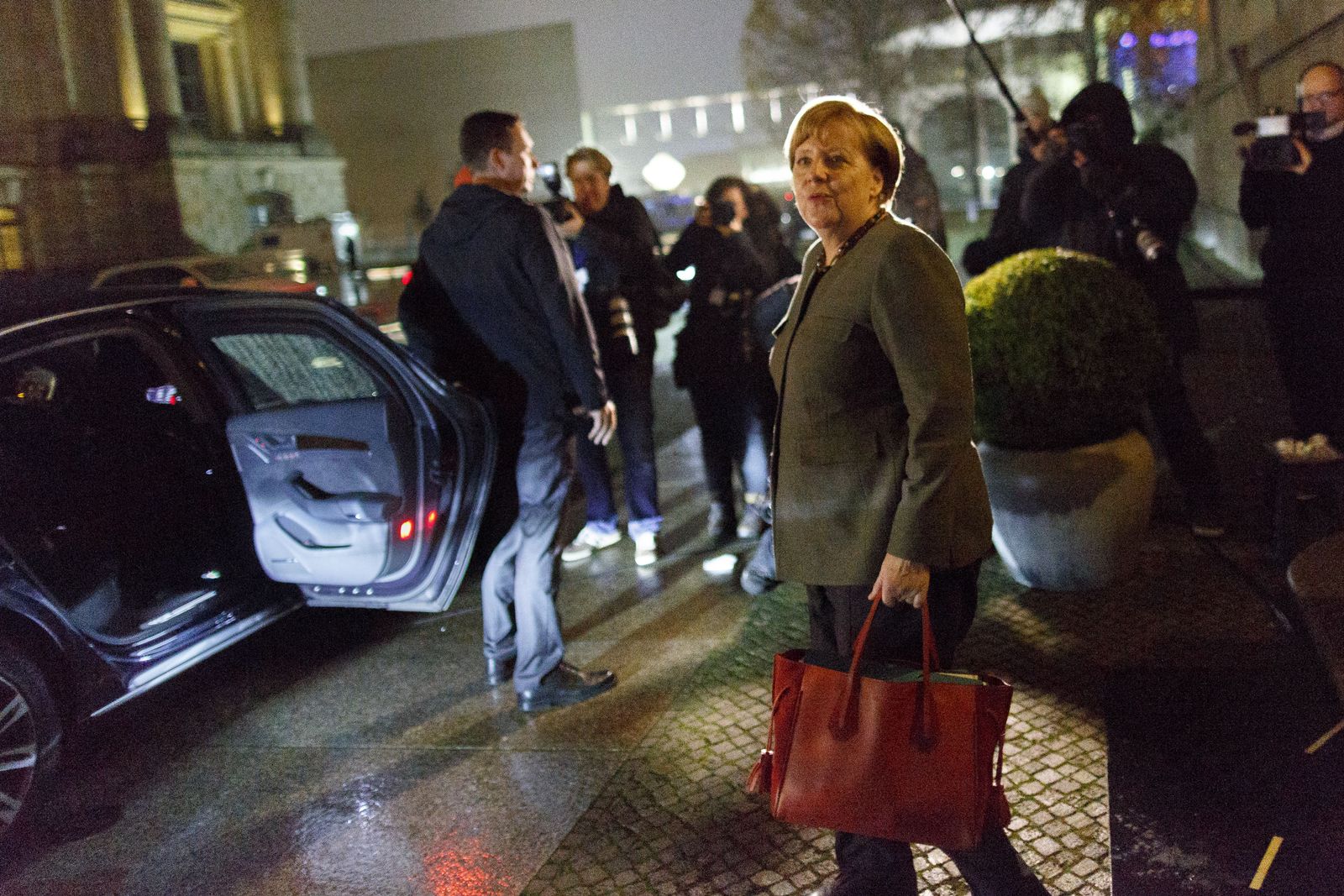