Germany's conservatives and the pro-business Free Democrats (FDP) want to start coalition talks as soon as possible following Sunday's election victory,and they could have a deal in place by the end of October to form a center-right coalition, leading party members say.

That means Merkel may travel to the EU summit in Brussels on Oct. 29 and 30 with FDP leader Guido Westerwelle as her new foreign minister.

The talks between Chancellor Angela Merkel's Christian Democrats, their Bavarian sister party the Christian Social Union (CSU) and the FDP face a number of hurdles. For example, the FDP is expected to demand a detailed review of government finances to determine the scope for the tax cuts they have been promising, and to determine whether there are any undiscovered debts risks lurking in the budget.

Rainer Brüderle, the FDP politician who may become economy minister, said the new partners needed to conduct an "honest opening audit." That may cause tension with Merkel, who recently said there was no need for a fresh audit -- after all, she said, the conservatives have been in government for the last four years and are familiar with the public finances. 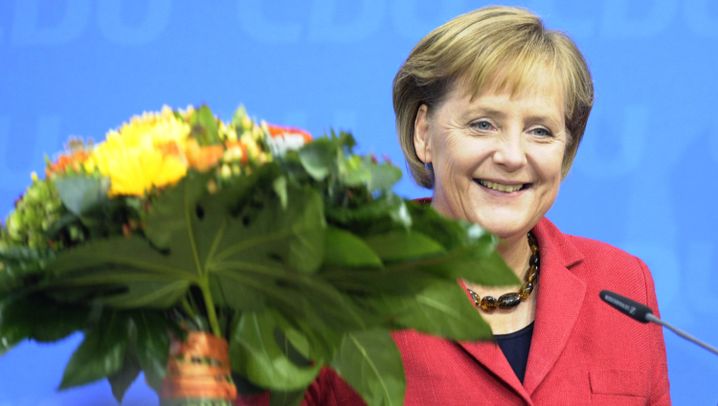 The FDP made far bolder tax cut promises than the CDU in its election campaign and a senior CDU politician, Baden-Württemberg governor Günther Oettinger, signalled on Sunday evening that tax cuts could be a sticking point in the coalition talks. "The FDP will have to come down a lot from their plans," he told reporters.

It will become clear in the coming weeks how big the tax cuts will be, and how soon they will come. The CSU wants to start lowering tax in 2011, but Merkel has refused to set a date.

The FDP is likely to fail to push through its plan for a radical overhaul of the tax system but may secure increases in tax relief for childcare services and increases in tax-free income thresholds for families with children.

Westerwelle has been a vocal critic of the healthcare reform enacted by Merkel's previous government and has accused her of undermining competition between private and public health insurers. But it may only push for small corrections. 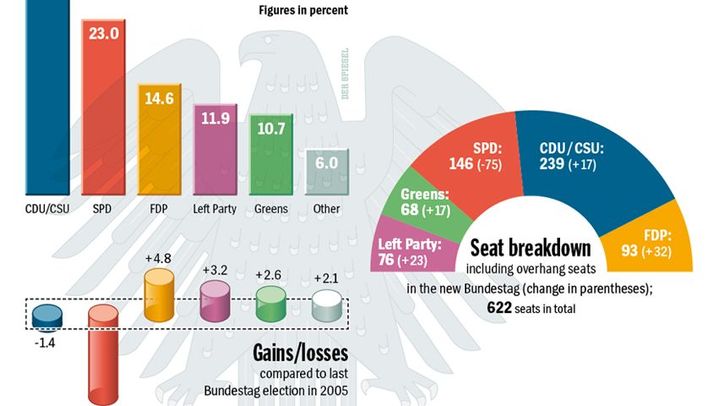 "We'll have to argue over several issues," Merkel admitted on Sunday. But she was at pains to stress that the new center-right coalition won't dismantle the welfare state. She said she wanted to remain chancellor of all Germans. "I haven't become a different person as a result of what happened today," she said in a televised debate among all the leaders of the main parties on Sunday evening.

But Merkel will have to change her style of government in the coming four years. She won't be able to remain as aloof as she did in the grand coalition. On Sunday night the business wing of her CDU, which was repeatedly disappointed by the policies of the grand coalition over the last four years, called for more radical measures to boost growth.

"We must show more competence in economic policy," said CDU parliamentarian Michael Fuchs, who chairs a parliamentary group that focuses on the needs of the medium-sized business sector. "We have adapted to the social wing too much."

Economic policy looks set to cause internal disputes within the conservative camp in the coming years. The CDU governor of North Rhine-Westphalia, Jürgen Rüttgers, a representative of the left wing of the CDU, faces a state election next year and has already signalled he will resist any reforms and cutbacks that cause voters too much pain.

The new government faces massive challenges, the biggest one being how to reduce government debt which has ballooned in the financial crisis. Bank bailout packages and economic stimulus programs have cost hundreds of billions of euros. Federal government debt is expected to rise by more than €300 billion by 2013, according to finance ministry estimates. Government debt is rising towards €2 trillion and will exceed 80 percent of gross domestic product in the years to come. That is why any tax cuts are likely to be largely cosmetic.

The new government will, of course, hope that the economy will recover strongly enough to boost tax revenues and thereby relieve the public finances. But that alone won't be enough, especially given new rules requiring the government to scale back its new net borrowing in the coming years. To reach that goal, the yet-to-be appointed finance minister will have to save some €40 billion in the years 2011 through 2016. There are three ways to do this -- spending cuts, higher taxes or a mixture of the two. Experience shows the third option is the most likely. The government will probably cut back subsidies and curb tax relief in a number of areas. It is almost certain to refrain from hiking value-added-tax any further.

Prolonging the phase-out period of nuclear power stations could also bring in fresh tax revenues. The nuclear power stations are due to be shut down by 2020 but the center-right coalition has pledged to allow some plants to remain on line for longer. This would boost the profits of energy companies which have long since written off the plants, and the tax income from those profits would allow the government to help fund renewable technologies.

Little change is expected in labor legislation. The FDP wants to scrap rules protecting workers from dismissal in companies with fewer than 20 employees, but the powerful left wing of the conservatives is likely to resist such a change. Besides, it's not really necessary following new rules that allow firms to hire more temporary staff.

The new government isn't like to make radical changes. Despite the economic crisis, Germany isn't as desperately in need of reforms as it was at the start of the decade. German companies are regarded as internationally competitive. The welfare system is in far better shape than it was a decade ago, largely because of reforms undertaken by the SPD-led government that preceded Merkel.

And despite the record debt, German state finances are solid in comparison with other countries -- both Britain and the US have far higher deficits. So the new government faces quite a favorable environment. But that's no excuse for doing nothing. The last conservative-FDP government under Chancellor Helmut Kohl confined itself to managing the status quo from 1982 until 1998. Its legacy when it was finally voted out of office was dilapidated state finances, a bloated welfare state and an overregulated labor market. 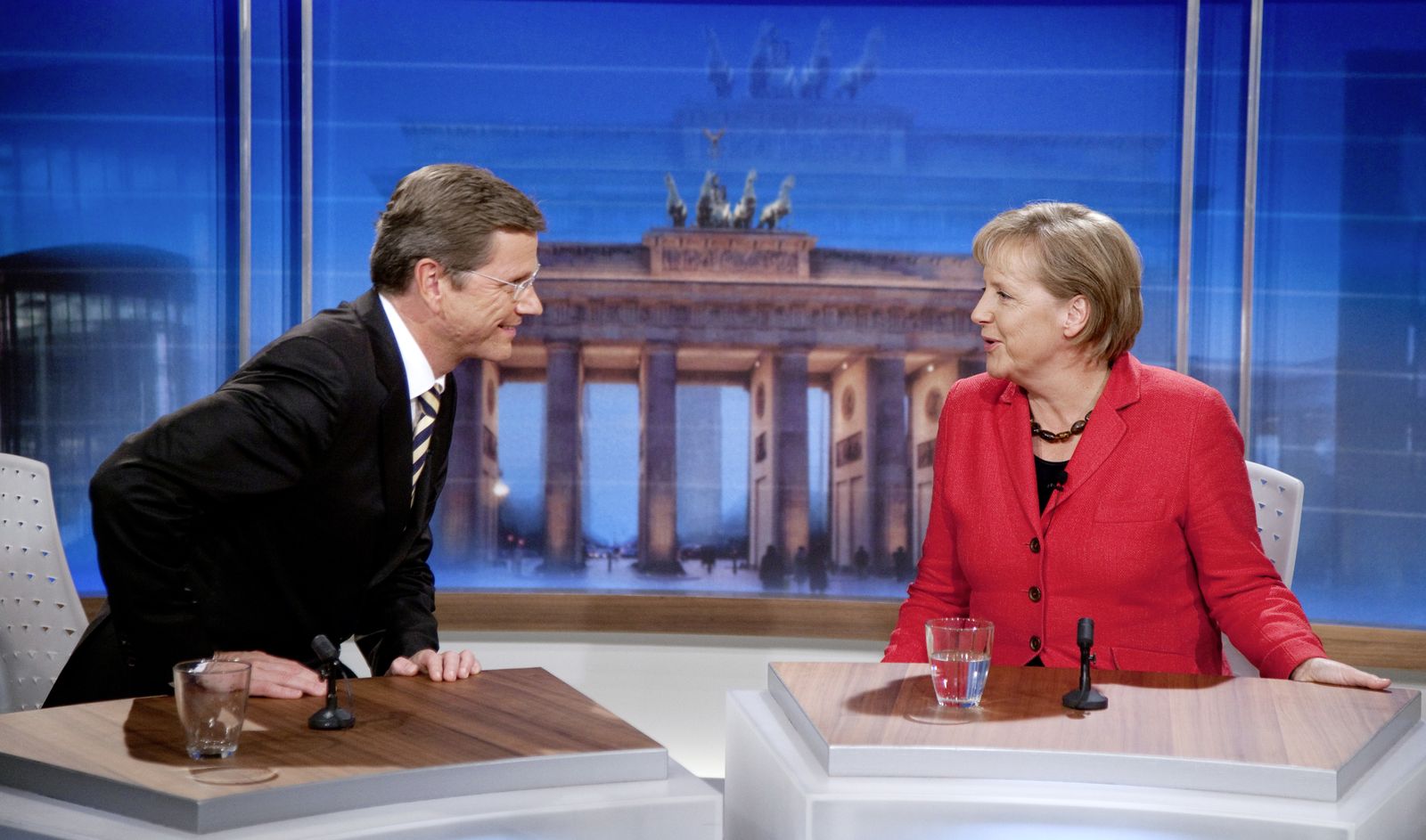 New partners: FDP leader Guido Westerwelle, likely to be Germany's next foreign minister, and Chancellor Angela Merkel in a post-election discussion on German TV on Sunday.