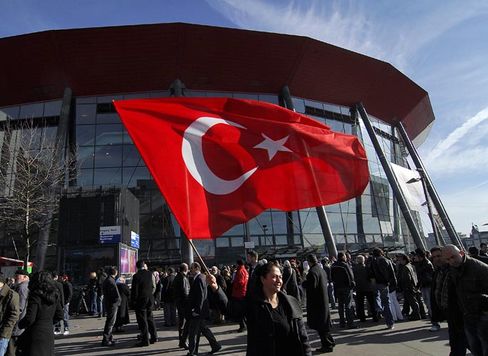 Fans of Erdogan turned out in their tens of thousands to hear him speak on Sunday.

Turkish Prime Minister Recep Tayyip Erdogan allowed the audience to applaud for a long time before he began addressing his "dear brothers and sisters" assembled in the colossal stadium. He smiled a lot, he waved confidently and shook hands. Approximately 20,000 Turks had gathered to listen to their idol speak in Cologne Arena -- while a few hundred Kurds held protests against the Turkish leader outside.

It's been a long time -- at least since the Berlin Wall came down -- since 20,000 people heard a politician speak live in Germany. The late US President John F. Kennedy drew about half a million Berliners when he delivered his famous speech on the balcony of Schöneberg city hall right after the Wall went up in 1961. Former Chancellor Helmut Kohl could still draw a good 10,000 listeners when he spoke in the winter of 1989-1990. During the most recent parliamentary election campaigns, Gerhard Schröder and Angela Merkel were happy if a few thousand people came to listen to their speeches. And now all of a sudden Erdogan, a Turkish leader, is giving a speech right in the middle of Germany to a capacity audience of 20,000 people -- not counting the many people who were waiting in vain outside to get in.

The Kurdish demonstrators outside yell "Erdogan is a murderer!" and "We are the PKK!" They wave flags bearing the likeness of Abdullah Öcalan, the leader of banned Kurdish organization the PKK. At the entrance gates to the event hall, patriotic Turks stand with red and white flags and bark back: "Damn the PKK!" German police officers stand between the two groups, and the attacks remain only verbal.

The event wasn't on Erdogan's calendar as part of his official state visit to Germany. Rather, it is a "privately organized event," as one police spokesperson puts it. And, as a private event, the police, strictly speaking, don't need to be here. But the police are in fact on alert due to the current "charged atmosphere" in Germany between ethnic Germans and people of Turkish descent.

It's been a week since nine people were killed in a fire in a Ludwigshafen apartment building which was inhabited exclusively by Turkish families. The tragedy fuelled suspicions among many Turks that the Germans want to get rid of them -- any way they can. The Turkish media in particular has focused on rumors that the fire was caused by an arson attack. Survivors who lived in the burned-out building have been quoted as saying: "Whoever did this to us should have his hands broken." On Sunday, the Turkish newspaper Hürriyet wrote again that three further children had witnessed the supposed arson attack. "Now they can no longer cover things up," the paper wrote. And that's what many Turks believe.

The charged atmosphere coincides with the largest Turkish political event Germany has ever seen: Erdogan is meeting with "Europeans of Turkish descent," according to the promotional material for the event.

Erdogan is fully aware of the tense situation. He begins his speech -- which won't be translated into German -- with flowery words. "The Turkish people are a people of friendship and tolerance," he says. "Wherever they go, they only bring love and joy." What he means is: Don't bring any shame on us, and stay calm.

Erdogan goes on to list the efforts that his government has made to push forward the German investigation into the Ludwigshafen blaze. But he doesn't try to make the incident any less painful. "Hopefully we'll never have to experience such pain again," he says at the close of this part of his speech.

The prime minister goes on to address the integration of Turks in Germany. "I understand that you are sensitive about the issue of assimilation," Erdogan says. "No one can demand that from you." Assimilation -- in other words, conforming to German culture -- is a catchword that Turkish immigrants associate with their fear of losing their national identity. Erdogan does not repeat the controversial demand he made to German Chancellor Angela Merkel on Friday, when he called for the founding of Turkish-language educational institutions in Germany. Today, he only says: "It is your natural right to teach your children their mother tongue."

During his long speech, Erdogan plays the integration card as he sees fit. He makes conciliatory noises, but he stops short of making a plea for assimilation. Although much remains vague, at times he takes a pragmatic tone. "Take advantage of Germany's educational institutions," he says. "It's a disadvantage if you don't speak the language of the country." Nevertheless, his speech, in which the phrases "we Turks" and "the Germans" appear again and again, does deliver a clear message: You may live in Germany, but you are Turks -- and I am your prime minister.

Putting on a Big Show 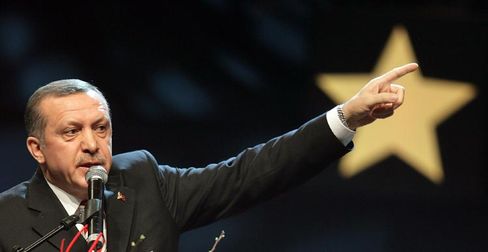 Turkish Prime Minister Recep Tayyip Erdogan delivered a stirring speech Sunday -- but how much content did it really have?

This was the first gathering of Turks held by a Turkish head of state in Germany. The spectacle had been advertised for weeks in advance -- on Turkish television, in newspapers and on billboards. "We are anxious to hear what the prime minister has to say to us," says a father from a town near Cologne. All morning, motor coaches organized by mosques and cultural organizations have been arriving from all over Europe.

Some of the spectators are disappointed that the musical program to be held before the speech was cancelled at the last minute, on account of the funeral services being held for the victims of the Ludwigshafen fire. Nevertheless, the staging is reminiscent of a superstar's pop concert. There are flashing multi-colored lights and dramatic music, and images of the prime minister are projected onto an enormous screen set up on the stage.

Ultimately the event is a painstakingly staged political PR appearance for Erdogan. The private mega-show has been organized by an association called the Union of European Turkish Democrats, whose self-stated aim is to "support the political, social and cultural engagement of Turks in Europe." A number of the organization's founders are old acquaintances of the prime minister, who makes regular visits to the organization when he makes state visits.

'Turkey Is Proud of You!'

Today the organization is thanking Erdogan for his support. The moderator announces the prime minister as if he was an MC at a boxing match announcing his favorite fighter. Before the star even arrives, everyone has to stand up and sing the Turkish national anthem. Many people join in with the singing, and the applause at the end is deafening. Then comes the German national anthem. "Come on, sing along!" one man says to the guy sitting next to him and laughs. The sound of off-key humming can be heard in the auditorium, followed by polite applause.

The predominantly Turkish crowd had been waiting anxiously for hours. Then suddenly: "The architect of Turkey, the man you've all been waiting for, is here!" The place resounds with thunderous applause and screams, and the sound of thousands of spectators bellowing "Turkey is proud of you!"

Erdogan's one-man show finishes around 4:30 p.m. The spectators give him a rousing send-off. Now it's time for the audience to drive home through the German night -- back to their dry-cleaning stores, their döner kebab restaurants, their hair salons and kiosks, their tailor shops and their engineering companies. They are returning to Hamburg, Munich, Berlin, Duisburg and Bremen; some are going as far as Brussels and The Hague.

Once home, they'll tell their relatives how the Turkish prime minister warmed their hearts in a stadium in Cologne. But they won't be able to explain how they can improve their quality of life in Germany, Belgium or the Netherlands. After all, Erdogan didn't say anything about that.