When German politicians pledged a more active international role at the Munich Security Conference last weekend, the reaction they got was almost euphoric. President Joachim Gauck, Foreign Minister Frank-Walter Steinmeier and Defense Minister Ursula von der Leyen appeared to be vying with each other to present their vision of a new Germany to the gathering of security experts and senior politicians.

At last Germany has grown up, said international officials and commentators. At last it's ready to accept a degree of responsibility commensurate with its weight. To be sure, the rhetoric is noteworthy because it marks progress from Germany's restraint and reluctance to shoulder responsibility. It was overdue. In recent years there's been an excessive discrepancy between Germany's economic clout and leading role in the euro crisis on the one hand and its reticence in international crisis regions on the other. But the general expressions of delight are surprising. After all, it's not uncommon for new ministers to make grand promises aimed at making them look different from their predecessors. The world will have to wait and see what Germany actually does in concrete terms to deliver on its pledge.

"Leading, I say respectfully, does not mean meeting in Munich for discussions, it means committing resources," US Secretary of State John Kerry told the conference.

After all, Germany's policy of military restraint wasn't only espoused by former Foreign Minister Guido Westerwelle. It was backed by Chancellor Angela Merkel herself. And there's nothing so far to suggest that she is departing from her guiding politicial principle: basing her policies on opinion polls. As long as a clear majority of Germans remain skeptical of or outright opposed to any German military involvement abroad, Angela Merkel is highly unlikely to commit troops to unpopular missions. The president and the ministers can hold as many grand speeches as they like -- if things get serious, they won't be the ones taking the decisions.

One should welcome Germany's readiness to become more involved at levels that don't go as far as committing troops -- such as its recent agreement to take part in the destruction of Syrian chemical weapons. But Germany's partners in Washington, London and Paris will measure Germany by the stance it takes when the international community next has to contend with a situation like Libya -- Germany abstained in the 2011 UN Security Council vote to impose a no-fly zone.

Future international missions won't be any easier, because the Americans are no longer prepared to automatically assume leadership. Germany will face the question not just whether and how it gets involved, but whether it's ready to seize the initiative. Following the planned withdrawal of international forces from Afghanistan, every new substantial military deployment will be harder to justify. In the eyes of most Germans, the Afghanistan mission was a failure.

So far, Germany's new foreign policy position has been flanked by nothing more than a microscopic increase in its involvement in Africa, That's not a big leap forward. Meanwhile, the murdering goes on in Syria and the conflict in Ukraine is escalating. Germany will need to prove it is ready to back up its words with deeds. 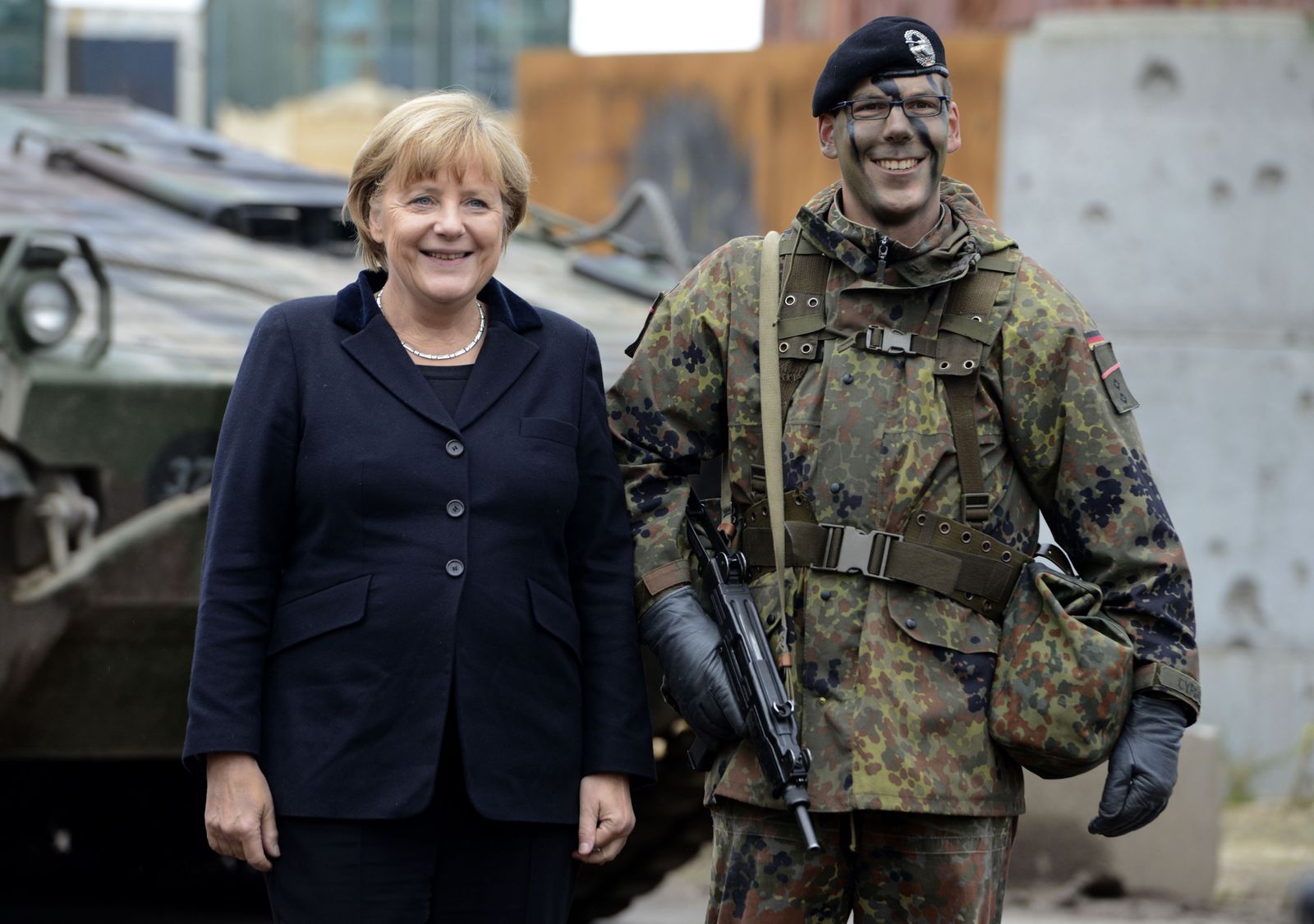 Angela Merkel poses with a soldier in Munster: Germany's military restraint is also a product of the chancellor herself.