Never before has there been this much drama at Germany's Federal Constitutional Court. One of the longest-serving police guards working there confided to a radio reporter that there has never been anything like this at the highest court in the land. The scene was thronged with journalists, satellite dishes, broadcast vans, cables and floodlights: The entire world had its eyes turned to this courthouse, a converted barrack on the edge of this western German city. All the fanfare was directed at one highly anticipated event: Eight judges, three of them professors, were about to publicly declare whether they intended to block efforts to resolve the euro debt crisis.

So, what happened? Just what everyone expected: The European Union will not be stopped in its tracks. Germany can now ratify the European Stability Mechanism (ESM), the permanent euro bailout fund, and the fiscal pact aimed at bringing economic governance to countries in the euro zone -- albeit with a few conditions. What's more, court President Andreas Vosskuhle repeated his usual warning that euro bailout packages cannot come at the cost of a loss of power for the Bundestag, Germany's federal parliament. Everyone has now relaxed, and even the German DAX index of blue chip companies is climbing.

But that's not all that happened. Never before has it been so clear that the best days of the Karlsruhe court are already behind it. All the pomp and circumstance of the eight judges in their red robes has grown hollow. The panel regularly and solemnly convenes in its massive courtroom to rule on what the relationship between the European Union and the democracy guaranteed in Germany's constitution should be. However, everyone sitting in the courtroom knows that there is precious little democracy when it comes to the current crisis in Europe.

In reality, these kinds of policies have long been determined elsewhere. For days, it has already been clear that the European Central Bank's (ECB) decision to launch an unlimited bond-buying program will bestow upon Germany's constitutional democracy debt burdens and stability risks that are of unimaginable dimensions -- and ones that this court cannot pass judgment on. What's more, German parliamentarians and the citizens of EU member states have had just as little say in all this as the German government. That's not a violation of the constitution, that is merely European Union politics, as it has been agreed to by the parliaments of every EU member state. From the very beginning, the central bank had been part of the major plans for a currency union. The fact that it is independent of any influence from parliaments is also permissable under Germany's constitution.

Even with all the hoopla in Karlsruhe, things will get much more exciting in the coming days, when Spanish Prime Minister Mariano Rajoy discusses the rescue of the Iberian Peninsula with the European finance ministers. The question of whether that is acceptable isn't even an issue the Constitutional Court can decide on -- because reponsibility for reviewing major decisions in Europe has long been placed with the European Court of Justice in Luxembourg. So, what happened? The guardians of democracy in Karlsruhe have no other choice than to pretend that nothing has happened.

This Wednesday has made it clearer than ever that the court has ceded its power to the European Union. The court won't stop the EU and everything that comes along with it because it simply can't. Was it recklessness or megalomania that once led Germany's constitutional judges to promise something else? They already paved the way for this in 1993, when they announced in a decision on the Maastricht Treaty that they would keep a very close eye on the stability of the euro and its democratic safeguarding in Germany. But, even then, the idea of having law professors in Karlsruhe have any say over Europe's common currency left many feeling queasy.

Since the judges can naturally only pass judgment when cases are brought before them, they had to open the door to Germans seeking help or protection from these euro-rescue efforts. Indeed, it was clever to use a constitutional mechanism that allows for any German to file a complaint against any step toward increased European integration: Whenever sovereignty migrates from one major body in Berlin to the European Union, such as the parliament's sovereignty over budgetary issues, it doesn't just affect Germany's democracy, which the constitution guarantees as a permanent, core element. More importantly, it also affects the right of every German citizen to participate in this democracy through his or her vote. Article 38 of Germany's constitution guarantees the right to vote as a "fundamental right." Legal scholars have interpreted this as meaning that any voter can directly send a constitutional complaint to the courthouse in Karlsruhe when he or she is unhappy about a decision made at the EU level. In fact, in a 2010 ruling on the Lisbon Treaty, the judges even took things a step further by asking German lawmakers to amend the Federal Constitutional Court Act to include a provision that explicitly allows for such complaints.

But this wish was never fulfilled -- so this risk-fraught constitutional setup remains in place. Indeed, a sort of direct democracy that partly bypasses the parliament has arisen. People who aren't happy with the decisions of the parliamentarians they've elected can try to once again exercise their right to vote in Karlsruhe. And, there, they only need to win over a majority of the eight justices.

Do people really want this kind of democracy? One must concede that the "Karlsruhe Democracy" brought by the court has often enough had a salutary effect on Germany's parliament, which has repeatedly slumbered rather than exercising its role as the advocate of German sovereignty in EU matters. Whether in the fight over European arrest warrants, or with the Lisbon Treaty or during the initial efforts to rescue Greece after the dawning of the debt crisis, the custodians in Karlsruhe have been repeatedly forced to goad the parliament into action because the latter were actually on the verge of abandoning their constitutional right of co-determination by acclamation.

In the meantime, however, the parliamentarians have very fundamentally learned their role in the EU. They didn't make things easy when it came to giving their blessing to the European Financial Stability Facitily and ESM, the temporary and permanent euro backstop funds, respectively. And, last fall, when the vote on the EFSF was held, Karlsruhe acknowledged that the parliamentarians had sufficiently realized their "overall responsibility" for the federal budget.

But Karlsruhe is no longer coming down from its thoughtful perch. Instead, the wise men and women of the republic are remaining high up on the unsteady tower built of constitutional bricks and gazing helplessly from Karlsruhe out into the distance, where European politicians are trying to combat the crises. Although they continue to officially treat the court with the utmost respect, these politicians have turned their back on Karlsruhe. Perplexed citizens -- but also a gaggle of quacks, populists and perpetual whiners -- are now loudly demanding that the Constitutional Court fulfill its promise. The court cannot defend itself against the constitutional complaints, but it also can't help the people making them.

At some point, Germans will notice all of this. But, by then, the crowds in the court will have thinned out. 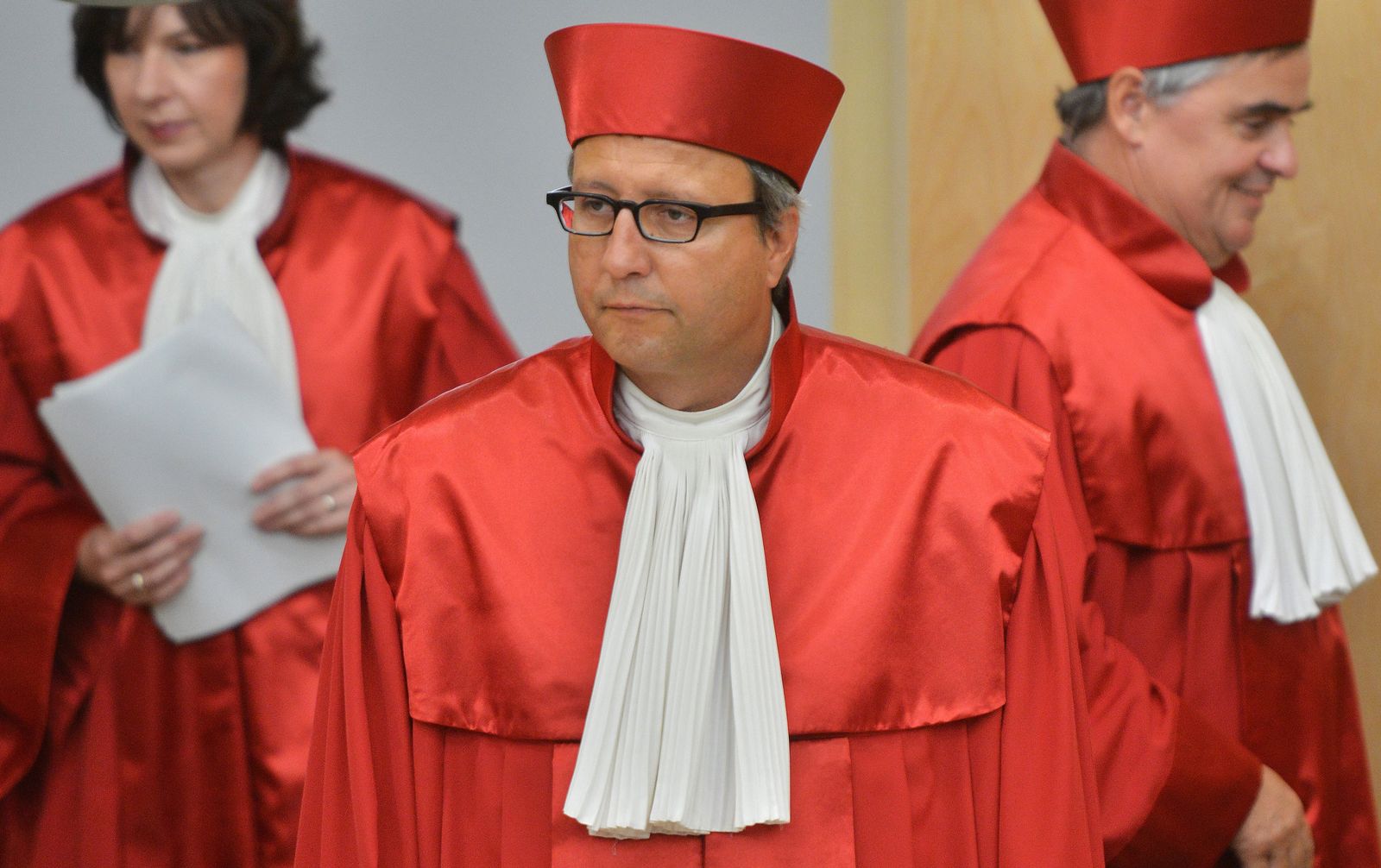