Germany's Social Democrats have been talking a lot about Europe lately. "When it comes to Europe policy, (the coalition government) can't just continue on the same course," Michael Roth, the European policy spokesman for the center-left Social Democratic Party (SPD), argues. According to Roth, improving Europe needs to be one of the guiding principles of a governing coalition. "European unity remains Germany's most important task," reads a set of SPD guidelines at Wednesday's coalition negotiations.

The Social Democrats have prepared important questions for the conservatives about everything from the possible tax on financial transactions to the creation of a European social fund, a debt-repayment fund and a sound banking union. But when the subject turns to who will face down Chancellor Angela Merkel on European policy, the SPD doesn't have an answer.

The solution, however, is simple: A Social Democrat needs to take charge at the Ministry of Finance.

That ministry is the only one with the means to fight Merkel. It has the most technically accomplished bureaucrats and, at least theoretically, veto power over the chancellor. More importantly, the finance minister represents Germany in the influential circle of European finance ministers and therefore essentially molds the decisions of the European Council.

"If the SPD renounces the finance ministry, the chancellor will ignore them mercilessly when it comes to Europe," says a high-ranking member of Merkel's outgoing governing partner, the business-friendly Free Democratic Party. "If they do that, they are as dumb as we were during the last coalition negotiations."

According to SPIEGEL information, the SPD no longer plans to insist on clinching the prestigous post that would give the party major power to shape European policy. They would happily leave the post to Merkel's Christian Democratic Union (CDU) in exchange for some major political concessions.

SPD faction speaker Thomas Oppermann is a possible candidate for the position, but he is openly ogling the Ministry of the Interior. Party head Sigmar Gabriel hopes to head a super-ministry consisting of the Ministry of Economic Affairs with additional powers from the Ministries of the Environment and Transport. And former Foreign Minister Frank-Walter Steinmeier would prefer to continue as leader of the SPD's national parliamentary faction.

If this is really the cabinet the Social Democrats have in mind, then they can go ahead and coin the new coalition motto: "Go ahead, Angela." They would ultimately be mere minions in a marriage of convenience with the conservatives.

Of course, this follows in the wake of an election in which Social Democratic chancellor candidate Peer Steinbrück gave the impression that Europe's future wasn't up for debate. Stunned foreign observers wondered why the rest of Europe was having a heated discussion about Germany's Europe policy, but not the German opposition.

The Social Democrats have an eloquent excuse for passing on the post: Leading the Finance Ministry wouldn't be politically opportune, because without the tax increases the SPD called for, there's barely any money to spend. Furthermore, party head Sigmal Gabriel likely fears competition if a party rival were to take on the position. And some SPD members probably lack the courage to take on a position like that in the first place. 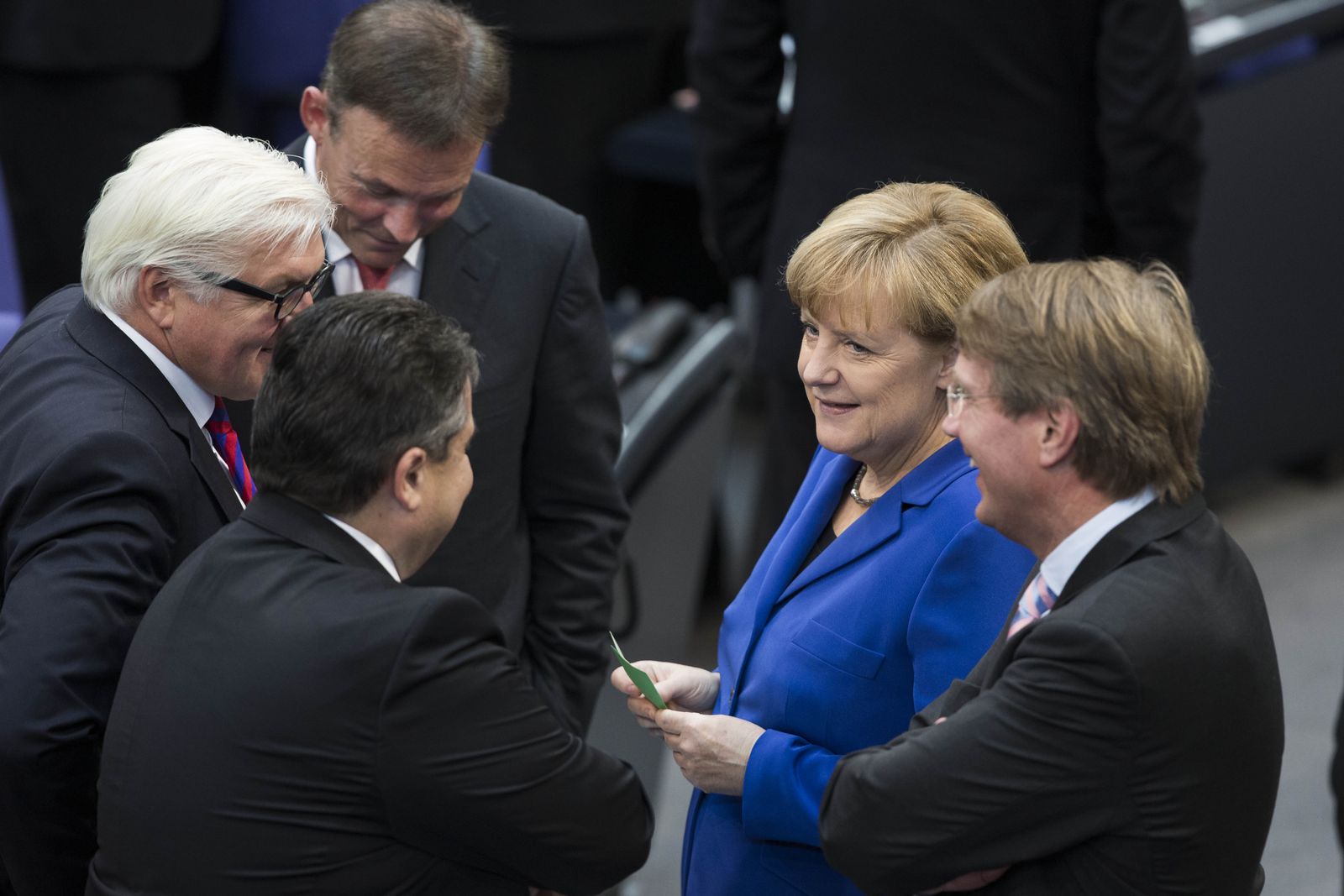 Merkel meets with conservatives and Social Democrats in Berlin.