The judges of the German Federal Constitutional Court are not known for giving hints about future rulings in panel discussions. But at the annual meeting of the German Bar Association in Strasbourg, France, on June 3, the court's president, Andreas Vosskuhle, made a casual and yet carefully worded statement that led to precisely such conclusions.

When asked whether there were instances in which the European Union could violate the core of Germany's constitutional identity, Vosskuhle said that there were, and that such "sensitive constellation" were indeed conceivable -- only to add, after a brief pause, that he believed that this would "not necessarily happen in the near future."

This statement would have gone unnoticed, had it been a casual remark by a university professor. But because Vosskuhle, as president of the Constitutional Court, has insider information, the statement allows conclusions to be made about pending cases. German news agency dpa promptly reported that this acknowledgment could have something to do with "the decision about the euro bailout fund."

At the moment, no issue is being followed more closely in Karlsruhe, where the court is located, than the question of when -- and how -- the Constitutional Court will decide on the complaints, pending for almost a year, against the first bailout package for Greece and the subsequently established, three-year bailout fund to stabilize the euro. If the court finds in favor of the plaintiffs, it will have grave consequences for the permanent European Stability Mechanism (ESM) now being planned, and, as a result, for the continued existence of Europe's monetary union.

Karlsruhe has now scheduled a hearing for July 5 to address the constitutional complaints brought by Peter Gauweiler, a member of parliament for the Christian Social Union (CSU) party, and a group of experts headed by Nuremberg constitutional law professor Karl Albrecht Schachtschneider. Clearly the court intends, at least, to critically examine the euro stabilization measures. A previous complaint by Gauweiler, against the EU Treaty of Lisbon, was largely successful.

Court May Qualify Its Approval of Bailouts

But Vosskuhle's remark more likely suggests that the court in Karlsruhe could be gearing up to reach yet another "yes, but" decision. And like the decision on the Lisbon Treaty, such a ruling could have a lasting impact on Germany's European policies -- and reinforce the view of the Germans as skeptics, know-it-alls and blockers.

There are in fact strong arguments to support the notion that the aid for Greece and the euro bailout fund are in violation of existing European law. Freiburg law Professor Dietrich Murswiek, speaking on behalf of parliamentarian Gauweiler, cites a statement made by French Secretary of State for Foreign Trade, Pierre Lellouche, who said candidly last May that the €440 billion ($638 billion) bailout fund "is expressly prohibited in the European treaties." And French Finance Minister Christian Lagarde, a candidate for the top spot at the International Monetary Fund (IMF), admitted: "We violated all legal provisions, because we wanted to appear unified and truly rescue the euro zone."

The legal relevance of such remarks should not be exaggerated, objects Ulrich Häde, the German government's representative in the case and a professor of constitutional law in the eastern city of Frankfurt on the Oder.

As it is, Karlsruhe could only issue a limited rebuke regarding any breach of European law, and it would be most likely to do so if that transgression violated the inviolable core of the German constitution. Vosskuhle's casual remark in Strasbourg already suggests that this will not be the case.

Even then, there would also be the domestic German aspect. It revolves around the question of whether the parliament can make the kind of commitment that largely eliminates its ability to make independent decisions about future budgets. And must the parliament retain control over the government's every statement of guarantee?

With the establishment of the temporary euro bailout fund last May, the Bundestag, the lower house of the German parliament, already imposed a significant restriction on its future budgetary room for maneuver. The decision empowers the finance minister to guarantee the liabilities of other European Union member states covering an amount of up to €147.6 billion. The parliament is left only with the right to issue a non-binding statement. The sum in question, together with the €22.4 billion slated for aid to Greece, makes up more than half of the current federal budget. In the worst-case scenario that Germany would have to pay out such a sum, it would be an enormous burden to the country's finances.

Fears Of Erosion of Parliamentary Powers

Murswiek argues that although Germany's constitution allows the government to make commitments that will affect future budgets, it does not permit "such an exorbitant assumption of a guarantee." According to Murswiek, it is unacceptable that the parliament "disposes of half the budget in advance, thereby giving up its room to maneuver when it comes to fulfilling a wide range of government duties."

With the planned permanent mechanism, the European Stability Mechanism (ESM), this intervention in the parliament's budgetary discretion reaches yet another dimension. Under the ESM, the German government will be required to provide €21.7 billion and assume guarantees for up to €168.3 billion.

This is why lawmakers from the pro-business Free Democratic Party (FDP), junior partners in Chancellor Merkel's center-right coalition, and some in her conservative Christian Democratic Union (CDU) party as well as in the CSU, their Bavarian allies, are calling for rules that would require the Bundestag to approve all financial aid packages in the future. Otherwise, says Joachim Wieland, a financial law expert in the western city of Speyer, the Bundestag would be "depriving itself of much of its power," which would constitute a violation of the democratic principle of the German constitution, or Basic Law.

German Fnance Minister Wolfgang Schäuble (CDU), is vehemently opposed to parliament being required to approve each individual aid package, which he believes is impractical. But the European policy spokesman of the CSU in the Bundestag, Thomas Silberhorn, is unimpressed by Schäuble's argument, saying: "There are no urgent cases in these situations."

It would not be surprising, at any rate, if Karlsruhe were to bolster the rights of the parliament once again. The involvement of members of the Bundestag is based on "constitutional principles," says Franz Mayer, a professor in the western city of Bielefeld who is representing the Bundestag before the Constitutional Court, "and anything deviating from that requires special justification."

Even though government officials are arguing that the financial markets would not take a bailout mechanism seriously if it required the prior approval of the Bundestag in each individual case, Mayer said he "could nevertheless imagine that the Constitutional Court would set very extensive guidelines here."

One possibility would be a parliamentary clause like the one the court imposed years ago in relation to the deployment of German troops abroad. "Greece, in particular, is a perfect example of how things don't work out the way politicians and their advisors expected them to," says Frank Schorkopf, a professor of European law at the University of Göttingen in central Germany. "This shows that the Bundestag cannot just activate a mechanism one time, but must approve each individual instance of financial assistance." 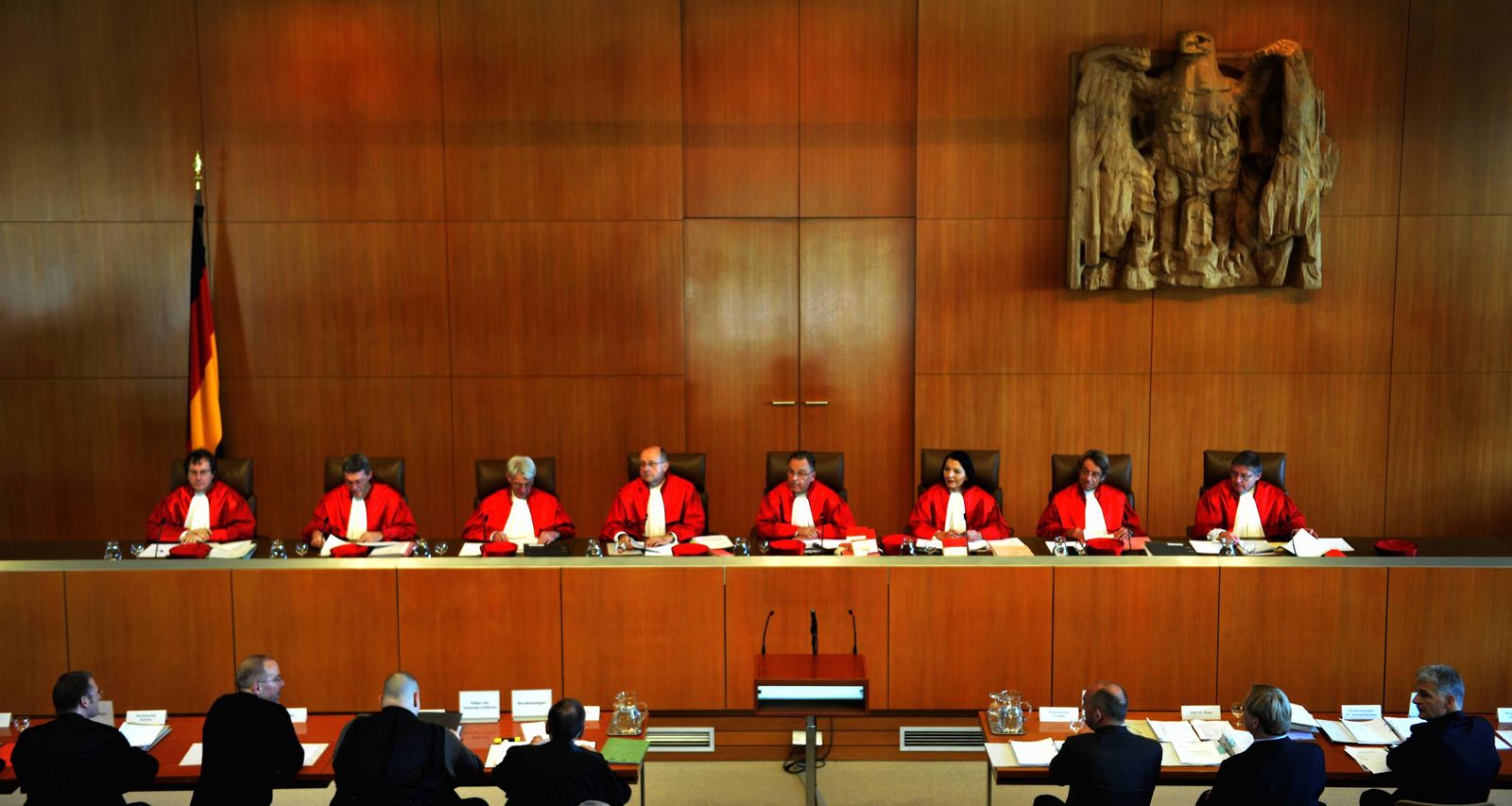 The judges of Germany's Federal Constitutional Court: will they throw a spanner in the works of the euro rescue?