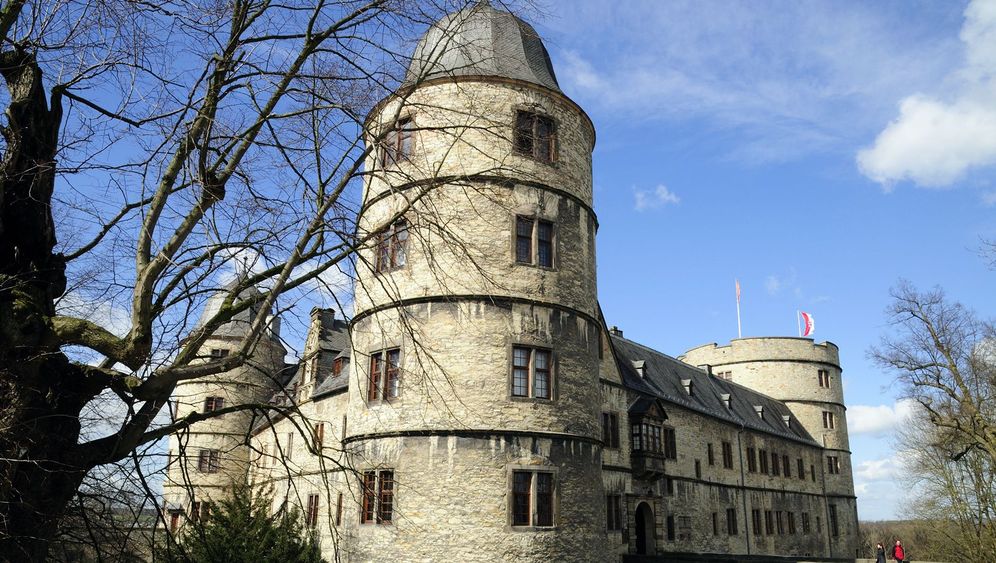 Wewelsburg Castle in northwestern Germany was the spiritual home of Hitler's murderous SS and ever since 1945, neo-Nazis and Satanists have spun myths about torch-lit ceremonies and ancient Nordic rituals that supposedly went on behind its walls.

The 17th century triangular building was converted in the 1930s by thousands of slave laborers working with a bizarre blueprint devised by Heinrich Himmler, the diminutive leader of the organization that epitomized the evil of Hitler's killing machine.

There can be no doubt that the place lends itself to fantasy. A dark, eerily echoing crypt with 12 pedestals around the wall and a gas pipe for an eternal flame in the center stands at the base of the north tower. On the floor above, in the circular "Hall of SS Generals," the occult symbol of a "Black Sun" is set into the marble floor.

The place has exuded a dark fascination for the last six decades. Satanists lured by the pagan symbolism have broken into the crypt to celebrate black masses, and far-right sympathizers still make pilgrimages to Wewelsburg, where they mix in with ordinary visitors and marvel at what Himmler wanted to turn into a "Reich House of SS Generals."

Standing in the center of the crypt, the echo of one's voice is amplified so forcefully that it seems disturbingly alien as it reverberates around the domed chamber.

What was it all meant for? Mystical pagan rituals to invoke Norse gods? Ceremonies to mourn the glorious fallen?

Historians are certain that no such gatherings ever took place here, and suspect that even Himmler hadn't made up his mind how the two chambers were to be used. They have devised a major new permanent exhibition, due to open on April 15, to explode the myths attached to Wewelsburg and to explore the history of one of the most powerful and dreadful organizations of the Nazi regime.

Shamed by the Holocaust, Germany struggled for decades to find appropriate ways of dealing with its Nazi sites. The Wewelsburg exhibition is part of a trend over the last 15 years to devise new museums at places like Hitler's Berghof Alpine retreat, the Nuremberg rally ground and the Gestapo headquarters in Berlin. The aim is to explain the sites to generations born after the Third Reich, and to incorporate the latest historical research and more modern exhibition techniques such as audiovisual and interactive exhibits.

"Looking at the perpetrators and visiting their sites makes you think about how you might have behaved at the time," Jan Erik Schulte, an expert on the SS who helped devise the Wewelsburg exhibition, told SPIEGEL ONLINE. "It's always easier to identify with the victims, to feel sorrow. But it's the perpetrators, and our confrontation with them, that pose the really existential questions."

Schulte, a historian at the Ruhr University in Bochum, said there had been a boom in research into the Nazi period since the 1990s, in many cases conducted by a younger generation of historians, and that the insights gained had led to an overhaul of museums and exhibitions at the main sites. "The research has also been motivated by the fact that many of the surviving eyewitnesses won't be around for much longer, and there's a last opportunity to talk to them."

From Bodyguard to Murderous Army

The SS, short for Schutzstaffel or Protection Squadron, was founded in 1925 as a kind of Praetorian Guard for Hitler. Restricted to tall, fit men of Aryan descent, it was steeped in Nazi ideology about the supremacy of the master race, and tried to underline its elite status by concocting pseudo-religious symbolism based on Norse mythology.

The SS symbol itself, now banned in Germany, consisted of Nordic runes. The SS mushroomed into a massive organization that guarded the concentration camps, conducted mass executions in occupied territories and fielded almost one million men in "Waffen SS" units renowned for their brutality.

The exhibition charts the origins and the exponential growth of the SS and provides details on the careers of dozens of leading SS members both during and after the war. Men like Josef "Sepp" Dietrich, an SS tank commander who was sentenced in 1946 to life imprisonment for his role in the execution of 70 American prisoners of war, and paroled in 1955. A committed Nazi until the end of his life, he died in 1966 and thousands of Waffen SS veterans attended his funeral.

Or Reinhard Heydrich, an SS general who was instrumental in organizing the Holocaust, and who was assassinated in Prague in 1942. Or Hans Ernst Schneider, an SS captain on Himmler's staff who evaded capture by changing his name to Hans Schwerte in 1946. He went on to pursue a successful academic career, becoming dean of Aachen Technical University and even winning the West German Federal Cross of Merit in 1983. Students unmasked him in the early 1990s and he was stripped of his civil service pension.

"They Weren't All Monsters"

"It's important to deal with the perpetrators and explore how people behaved the way they did, and what type of men they were," Kirsten John-Stucke, the deputy head of the exhibition, told SPIEGEL ONLINE. "The SS members weren't all monsters. Saying they were all sick in the head would make it too easy. A lot of them were normal men who wanted to advance their careers."

The sense of belonging to an elite attracted many to the ranks of the SS, and some savored the power over life and death they had during the war, say historians. Peer pressure and fear of appearing weak led many to commit heinous acts of torture and murder.

"Individual SS leaders were given a lot of scope to develop their initiative. It was left up to them how to fulfil the tasks they were given," Moritz Pfeiffer, a historian working at Wewelsburg, told SPIEGEL ONLINE. "This was a big factor in radicalizing them. The Holocaust didn't exlusively result from orders passed down from above. It consisted of the combination of individual initiative and commands from on high." The SS was an ideal environment for ruthless people who wanted to advance quickly.

The museum, laid out on two floors of the former guardhouse of the SS at the foot of the castle, is filled with the paraphernalia the organization used to highlight its elite status and its blind, merciless loyalty to Hitler -- the dreaded black uniform, caps bearing the organization's skull insignia, an SS Honor Ring and a rusty dagger bearing the inscription: "Unsere Ehre Heisst Treue" ("My Honor is Loyalty.")

The exhibition juxtaposes those objects with a detailed account of the system of concentration camps manned by SS squads, with examples of books burned in the name of Nazi ideology -- books such as Erich Kästner's "Emil and the Detectives" -- and with audio interviews with survivors of the nearby Niederhagen concentration camp. The camp was purpose-built to accommodate the forced labor needed to turn Wewelsburg into a playground for the SS leadership. Located just a kilometer from the castle, it housed 3,900 political prisoners, Jews, Jehova's Witnesses and prisoners of war, of whom at least 1,285 died of hunger, disease, cold and maltreatment.

"We want to show that you can't divorce the ideology from the crimes that resulted from it, so we display SS artifacts alongside information on the Holocaust and the victims," Pfeiffer said.

Himmler leased Wewelsburg, the site of a castle since the early Middle Ages which was subsequently rebuilt as a ducal residence in the 17th century, in 1934 and at first planned to turn it into a kind of SS college. For a time during the 1930s, archaeologists, genealogists and anthropologists -- all members of the SS -- conducted research there to try to back up Nazi theories on the supremacy of the Aryan race and on the supposed Nordic heritage of the German nation. With the outbreak of war in 1939, the research ceased as the academics were enlisted in the military effort, and Himmler changed his mind about Wewelsburg.

The plan now was to turn it into a meeting place for the exalted leaders of the SS, for swearing-in ceremonies of SS generals, and for storing the Honor Rings of fallen comrades -- a pseudo-religious site for remembrance and self-reassurance. In the end, only two meetings of SS generals were ever held there -- the last taking place from June 12-15, 1941, on the eve of Operation Barbarossa, the assault on the Soviet Union that sealed Hitler's fate. At that meeting, Himmler told his generals that the aim of the campaign was to kill 30 million Slavs. Nazi Germany came tragically close to that number.

Himmler's grand plans for the castle were never finished. He had wanted to expand it into an idealized "Nordic" settlement the size of a large city, and to evict the population of Wewelsburg, but all non-military construction in Germany was halted after the German army's defeat at Stalingrad in 1943, seen as a turning point of the war. By that time, the slave laborers had toiled not just to build the mystic meeting halls but had removed the renaissance plaster from the castle walls and replaced it with stone cladding to give it a medieval appearance totally out of keeping with its 17th century design.

In fact, the overriding impression is that everything about this castle is fake. The crypt resembles the set of a 1940s Hollywood movie about King Arthur and his knights. The arches in the "Hall of Generals" may be covered in medieval-looking stone, but are made of concrete. "It's an impressive example of how the SS and its architects tried to falsify and recreate history to justify their own ideology," said Schulte. "When you strip off the façade, there's nothing behind it."

Wewelsburg is nothing more than a historical construction site. "It has become a focal point for all manner of myths, but there is no evidence whatsoever to back them up," said Pfeiffer.

That may be disappointing news for the neo-Nazis who flock here. But the need to shatter the lingering myths makes the exhibition at this site all the more important, historians say. They expect the museum to attract up to 50,000 visitors per year, up from 30,000-35,000 who visited the previous, far smaller and less ambitious exhibition at Wewelsburg that was opened in 1982. The new project cost €7 million ($9.4 million) and was funded by government money.

The Battle for Remembrance

The exhibition also gives an account of the arduous debate in Wewelsburg village itself about whether and how to commemorate the Niederhagen concentration camp victims. Many local people were opposed to a memorial because they did not want to be associated with the crimes committed in their village. Today, a flat, triangular memorial marks the site of the camp's roll-call ground, but it was only put up in 2000 following an initiative by young people in the village. "What happened in Wewelsburg since 1945 reflects how Germany as a whole dealt with its history," said Schulte.

A wealth of neo-Nazi paraphernalia is also on show, to demonstrate how Hitler's ideology continues to inspire people to this day. Wewelsburg has video surveillance in the two historical chambers and reserves the right to evict far-right sympathizers who misbehave.

"We used to get a lot of former SS members visiting here, but there are fewer these days, of course," said Kirsten John-Stucke, the deputy head of the exhibition. "Wewelsburg has always attracted neo-Nazi sympathizers. You can't always recognize them. We're not overly worried that there will suddenly be an influx. If too many of them come, we'll have to do something about it and get additional security guards."

"We used to try to discuss the Nazi era with them, but we realized there's no point," she added. "They don't come here to learn."