Angela Merkel has never been a great orator. She demonstrated that fact once again on Tuesday when she held a tepid hour-long opening speech at the annual party conference of her Christian Democratic Union (CDU) party.

But as she has also repeatedly demonstrated, she doesn't have to be. After all, the German chancellor is at the peak of her power. She has long since sidelined every possible rival in her party, she faces a relatively weak opposition, and she is enjoying popularity ratings close to 70 percent, with Germans crediting her with steering the country through the euro crisis without making too many costly concessions.

And now, she looks set to cruise to a third term following general elections scheduled for next autumn. On Tuesday, her party backed her candidacy to the tune of 97.94 percent, the most support she has ever received. Now, all she has to do is find a coalition partner.

Her speech was long on self-congratulation and short on new ideas. She claimed that hers had been "the most successful government since reunification," and that Germany was the "growth engine of Europe." Switching to tried-and-tested maritime metaphors, Merkel pointed out that "these are turbulent times. And sometimes we're in heavy, stormy seas." She added that the CDU was guiding the country "safely with a clear compass."

As did Merkel on Tuesday in Hanover. To stick with the metaphor, the congress was plain sailing for the chancellor, and she won an eight-minute ovation. As is often the case with Merkel, there was no passion and no discernible vision. But it was a tactical masterpiece -- and one which revealed her party's difficult position of leading in the polls but having no obvious coalition partner should its current partner, the Free Democrats (FDP), continue to flail in opinion polls.

Looking for a Queenmaker

Indeed, Merkel's criticism of the opposition Greens and center-left Social Democrats was so gentle that, to borrow a famous phrase from British Labour politician Dennis Healey, it must have felt like being savaged by a dead sheep. Merkel knows that she might have to woo one of the two parties if she wants to remain chancellor after the 2013 election. Most predict that the FDP, which has seen its support slide dramatically since the last election in 2009, will be too weak to serve as queenmaker next year.

She has no choice but to contemplate other options, the most likely being a repeat of the grand coalition of CDU and SPD with which she governed during her first term, from 2005 and 2009.

A regional vote in the northern state of Lower Saxony next month could set the stage for the general election. The local CDU, led by state governor David McAllister, is expected to emerge as the strongest party but could still be ousted by the combined SPD and Greens -- a result that would shake the CDU and dampen Merkel's outlook for a third term.

Still, Tuesday demonstrated just how tight is the hold that Merkel, daughter of a Protestant pastor, has over the Catholic, male-dominated CDU. She was elected as the party leader for the seventh time with almost unanimous support, up from the 90.44 percent she received in 2010.

Gone is the criticism of her lack of leadership, her fence-sitting and her U-turns such as the 2011 decision to shut down the country's nuclear reactors, just months after her bold, controversial move to extend their lifetimes.

Not everyone in the CDU is happy about the way in which Merkel has modernized the party in recent years in a leftward shift aimed at winning more cosmopolitan voters. Under Merkel, the CDU has been pushing for more childcare places and officially supports a minimum wage.

But party officials, at pains to send out a message of unity in Hanover, stifled debate on a range of contentious issues. A row about the tax treatment of gay couples, for example, has been shelved.

Wolfgang Bosbach, a senior CDU lawmaker who has openly criticized some of Merkel's policies, said: "We need to watch out that in our search for two new voters, we don't lose three old ones," he said. But such grumbling didn't spoil the party in Hanover.

At the moment, everything is working in Merkel's favor. She has managed to keep a lid on the euro crisis without causing German taxpayers too much pain, for the time being. The economy has slowed down but it remains strong, and exports are still growing, as figures on Tuesday showed. Unemployment remains low and business sentiment is improving again after months of decline. In the euro zone, Germany remains a large island of economic prosperity in a sea of austerity-induced misery.

Her challenger for the Chancellery, Peer Steinbrück of the SPD, has been weakened by a mini-scandal over a string of lucrative speaking engagements he had before he was nominated by his party two months ago.

Steinbrück hasn't broken any rules, but the controversy wrecked the start of his campaign to oust Merkel, and has hurt his standing in the SPD, where many see the pragmatic finance expert as a poor representative of the party's social equality platform. It is a frustrating time for the SPD, whose vocal criticism of Merkel's euro crisis management has been undermined by its consistent support for her measures in parliamentary votes.

"Keeping the peace at her party congress is more important to her than taking policy decisions," said SPD lawmaker Thomas Oppermann. "But as no one knows what the chancellor stands for, the CDU is rudderless."

That may be true, but the same could be said of the SPD. So despite Merkel's chronic lack of Churchillian oratory, she will be extremely difficult to unseat next year. 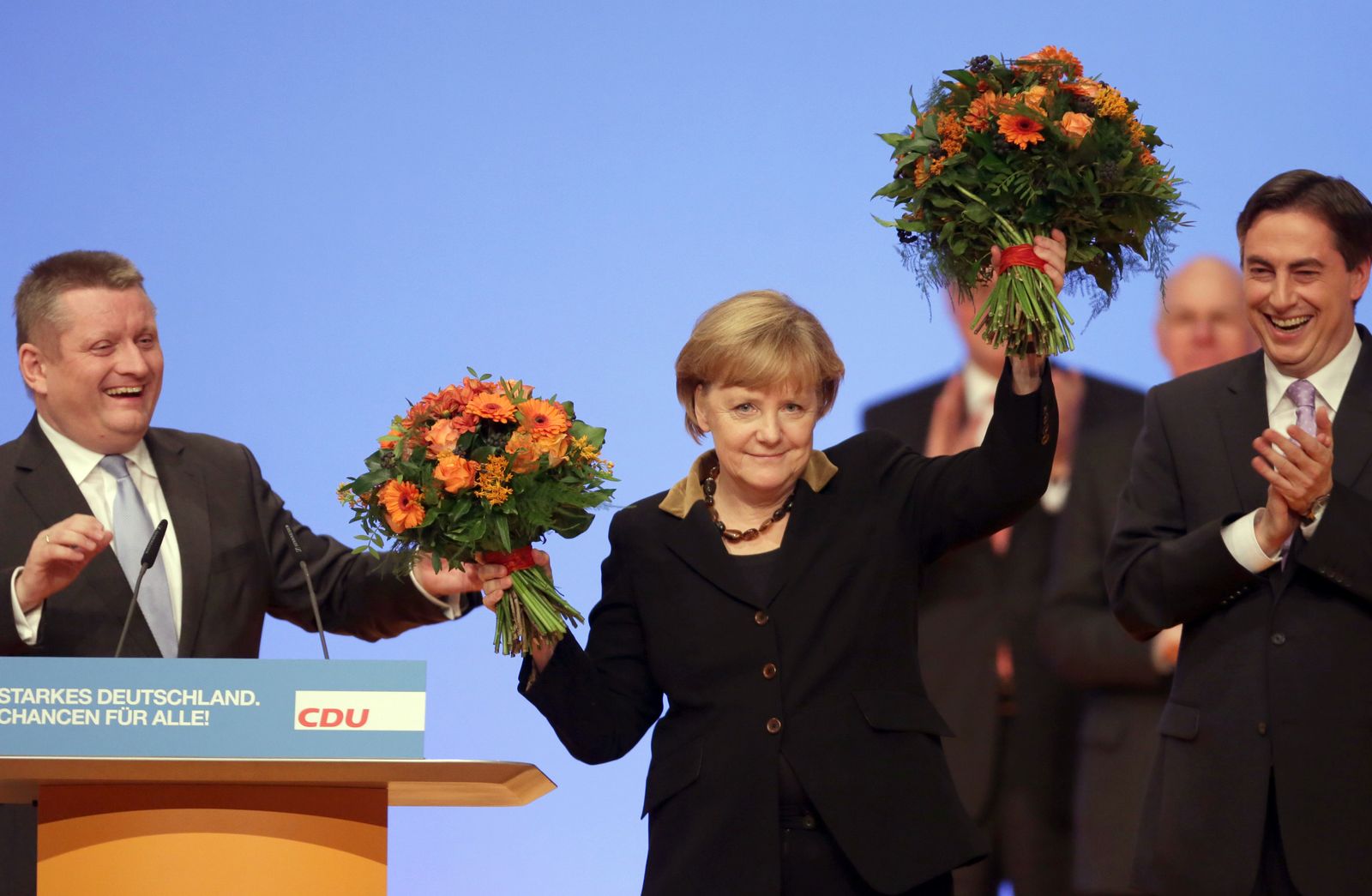 Angela Merkel being feted after her record re-election result as party leader.