There are currently 18 conspiracy theorists campaigning for seats in the U.S. Congress, according to Media Matters for America, a media monitoring group that specializes in tracking disinformation. The candidates, most of whom are Republicans, subscribe to the so-called "QAnon" theory. There are also roughly a dozen former candidates also pushing the theory.

QAnon is essentially a globalized evolution of the so-called "Pizzagate" theory, according to which a group of Democrats, led by Hillary Clinton, ran a child molestation ring out of the basement of a pizzeria (that had no basement) in Washington, D.C. The lie gained such traction that at one point, a man with an assault rifle stormed the pizzeria. Fortunately, no one was hurt.

Mueller and Trump vs. the Satanists?

Today, proponents of "QAnon" believe there is a global ring of Satanists and child molesters whose members include, naturally, leading Democrats, but also the liberal billionaire George Soros, many intelligence officials, the so-called "Deep State," Hollywood stars, heads of state and every former U.S. president.

Donald Trump, the theory goes, is the only person capable of vanquishing these dark forces. In fact, he was supposed to have the help of special investigator Robert Mueller and a wave of secret arrests, but somehow that doesn't seem to have worked out.

The source of QAnon is "Q," an ostensibly high-ranking member of the U.S. government and sharer of deep, dark secrets that he cryptically disseminates online. At first, "Q's" messages began appearing on the image-sharing platform 4chan, then on the more extremist (and now defunct) site 8chan. Now, his messages can be found on the next iteration, 8kun.

A Club for Crazies

The former operator of 8chan, a platform where various right-wing extremists and mass murderers publicized their lethal deeds, has now founded his own super PAC, a fundraising vehicle to finance the election campaigns of QAnon supporters. The new organization is called, "Disarm the Deep State."

It's well known that Donald Trump also likes to rant about the supposed "Deep State." The people he's referring to are, of course, civil servants and administrative staff. They include, for instance, the pandemic task force of the Centers for Disease Control, which was almost entirely disbanded in 2018 and has not been restored since.

Inspiration for the Hanau Killer

The fact that "Q" keeps making predictions that never come to fruition doesn't seem to bother adherents of his theory. One person in Germany who appears to have been at least partially influenced by QAnon is the perpetrator of the recent racist killing spree in the German city of Hanau that left 10 people dead. In the attacker's final video, he talked about underground facilities in which children were abused and killed.

At every Trump rally, there are always enthusiastic fans wearing "Q" T-shirts. The president, for his part, is happy to return the favor: He recently used his Twitter account to disseminate messages from clearly identifiable QAnon supporters to his 68 million followers. On Dec. 27 alone, Trump retweeted some 20 different QAnon fan accounts, giving them an extraordinary reach.

The FBI classifies QAnon as a potential terror threat. Supporters of QAnon have already committed various violent crimes, citing the conspiracy theory as a motive. Republicans, for their part, don't only tolerate those who believe this dangerous story in their ranks, they even want to see some of them elected to Congress.

Trump's initial response to the coronavirus must also be viewed against this background. For the president, as a rule, reality is frequently optional and almost always an annoyance.

But in the face of a global pandemic, Trump's ability to manipulate the public discourse hit a wall. It's easy to lie with impunity about things that -- in the eyes of his voter base -- are far away, like Sweden, or that lie somewhere in the distant future, like climate change. But when it's one's own neighbors, friends and relatives who are falling seriously ill or even dying, the contradiction can't be resolved or pushed away by an extra dose of Fox News. The same can't be said of hardcore conspiracy theorists, of course. Those people will always find ways to make Trump out to be both a hero and a victim.

A viral tweet by the author and professional podcaster Stephanie Wittels Wachs illuminates this phenomenon quite well:

Populists like Trump are realizing that they can't continue denying the reality of the virus. It doesn't work. It has smashed up against the brutal reality of the exponential force with which the virus spreads. The same goes for the blatant weaknesses of the U.S. health care system, which Republicans have declared to be utterly irrelevant. There are 28 million people in the U.S. without health insurance, 11 million undocumented immigrants and an unknown number of workers without the right to paid sick leave. Many of them will likely continue to have a tough time getting tested for the SARS-CoV-2 virus, even as the U.S. has finally begun ramping up its response.

From 'Fantasy' to Face Mask

The president himself, of course, contributed to the escalation with his usual tactics. First, discourage. ("It will go away. Just stay calm. It will go away.") Second, blame others. ("It’s one person coming in from China.") Third, block entry from Europe (but not for Americans, their families or travelers from countries in which Trump owns golf courses). Fourth, praise himself and, finally, sow confusion.

Trump is not the only right-wing populist and conspiracy theorist whose ego trip and denial of reality is currently colliding with the undeniable reality of the virus: Brazil's President Jair Bolsonaro, who last Tuesday described the coronavirus as a "fantasy" and an invention of the media, was himself photographed wearing a face mask just two days later. A member of the delegation he brought with him to the U.S. had tested positive for the virus. 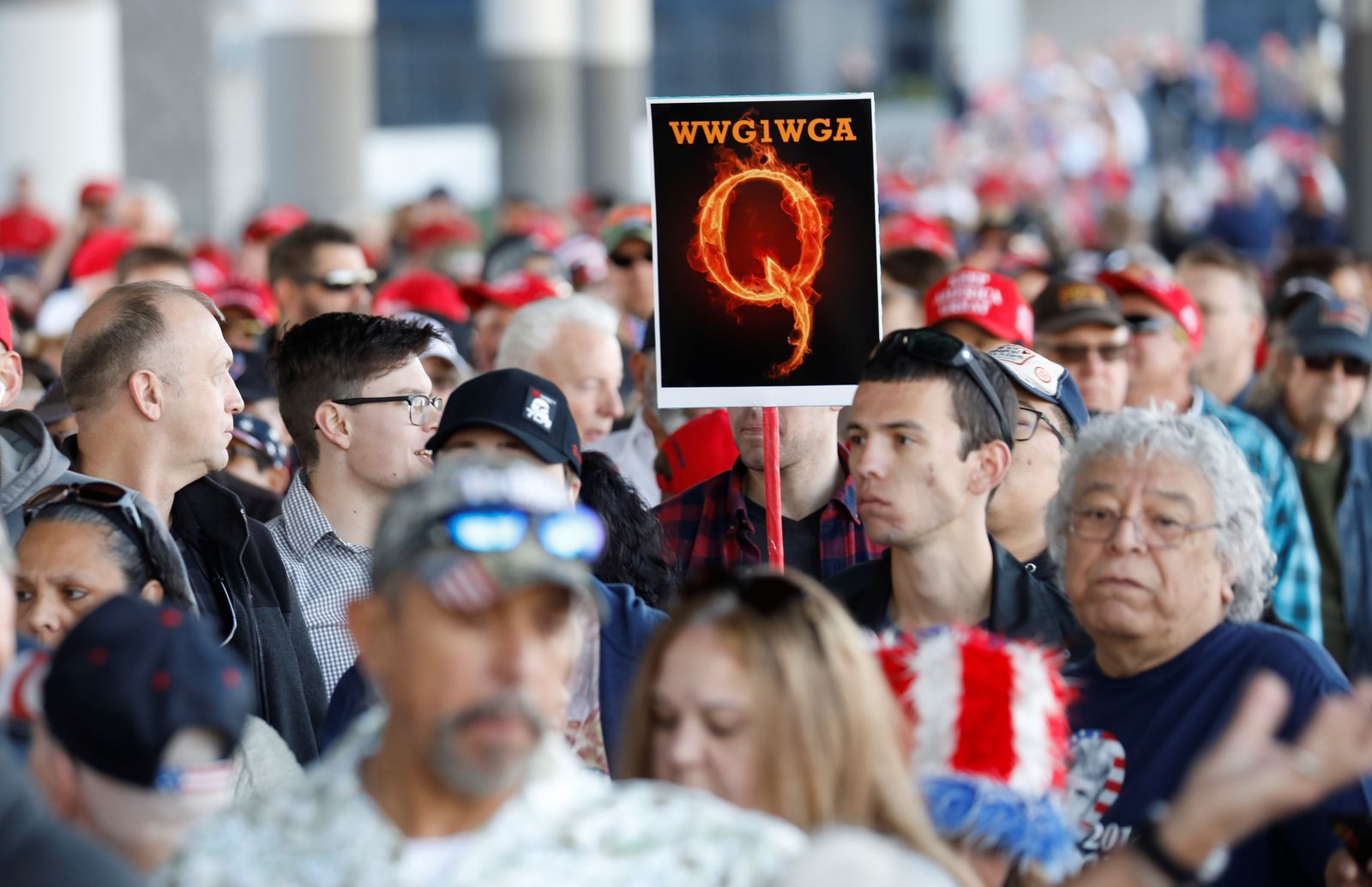 A QAnon supporter holds up a sign at a Trump rally.