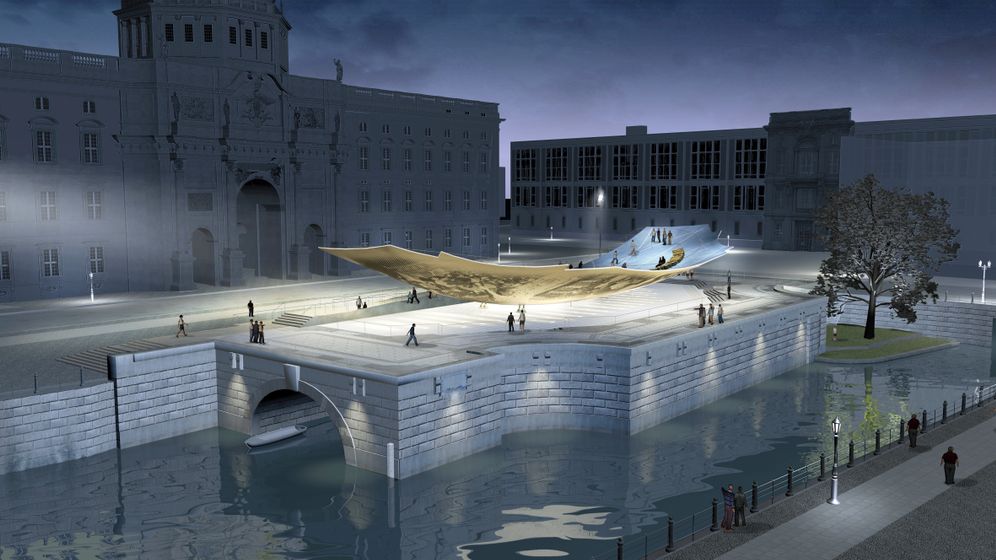 The air feels damp and cold, and it smells a little musty. But the way Ulrike Jacobi's eyes are shining at the sight of walls over four meters (13 feet) thick and thousands of wooden stakes, you'd think she was in Shangri-la.

"Quite a work of art," gushes project leader Jacobi, from the German Federal Office for Building and Regional Planning. Then she leads the way into another undergound vault and points out a hole in the wall. "Bats fly through there," she says into the darkness, explaining that these chambers are known as "nursery roosts" because they provide a quiet refuge from male bats for roosting females.

Right now, those bats -- and their home in central Berlin -- are a major topic of conversation in Monika Grütters' office on the eighth floor of the Chancellery. The new government commissioner for culture and the media, Grütters has realized to her dismay that they're impeding one of the main projects she'll be overseeing during her years in office: The site where they've taken up residence, once occupied by a statue of Kaiser Wilhelm, is now earmarked for Germany's new monument to freedom and unity, a memorial to the country's 1990 reunification.

The 25th anniversary the fall of the Berlin Wall is approaching this autumn, and the anniversary is set to be marked by the unveiling of two major memorials in central Leipzig and Berlin. But their ceremonial inauguration is unlikely to happen in the foreseeable future -- there are just too many problems with the schedules and the budgets of both. Indeed, the Leipzig project is hanging in the balance.

Experts at the Chancellery and at the agencies responsible for oversight recently referred to the "rising costs" of the Berlin project and the unpredictable outcomes of applications for various permits. Construction is proving "extremely difficult," says Grütters.

Germany's parliament voted to erect the two memorials in 2007 and 2008. But so far, both still only exist on paper. In Leipzig, the only evidence of the plan are a few signposts dotted around a vacant lot on the edges of central Leipzig. The design by Munich architects Marc Weiss and Martin de Mattia, which won an international competition in July 2012, envisions 70,000 blocks in seven different colors forming a vast quilt -- representing the 70,000 demonstrators who participated in the first mass protests against the East German leadership on October 8, 1989.

But the very people who overcame their fears to take to the streets 25 years ago and vent their anger -- aware that the police or the army could launch a bloody crackdown at any time -- are unimpressed by the design.

"It does not in any way acknowledge the courage of the people who took part in those peaceful demonstrations," wrote one user in an online forum that city of Leipzig set up in response to the outcry. Should the winning design ever come to fruition, wrote another user, "it would have to be seen as an invitation to tourists from all over the world to come here and trample, literally, all over the memory of the brave people of Leipzig in 1989!"

A Means to an End

Many activists feel even the choice of the site is offensive. The memorial will be constructed on Wilhelm Leuschner Platz, a run-down square that played no role in the historic demonstrations in 1989. Many harbor the suspicion that the city of Leipzig is using the €5 million in federal money allotted to the project to revitalize a neglected part of town. The memorial is simply a means to an end.

City officials eventually bowed to the public pressure, to some extent at least, and allowed the competition entries to be reworked in what proved to be a highly controversial move. As a result, the design that had originally placed third was bumped up to first place. But after the higher regional court in Dresden ruled against the process, the colorful carpet could still have a chance.

But will this monument to civil courage be erected against the will of the people? Heading up the whole project is Burkhard Jung, Leipzig's mayor. He's in a quandary. Influential regional politicians such as Michael Kretschmer, general secretary Chancellor Angela Merkel's Christian Democrats in the state of Saxony, are eager to see the winning design carried out, as is the Chancellery, which is bankrolling it. "History will show if the people like the monument or not!" says Kretschmer.

But former Leipzig Mayor Wolfgang Tiefensee, a Social Democrat, not only objects to the carpet design, he also disapproves of the entries that came second and third. "What we need is a monument that even outsiders can grasp," he argues. "It must be able to speak for itself." He has therefore called for a brand new competition as well as a veto right for the people of Leipzig. He's hoping to get a chance to discuss the matter personally with Monika Grütters.

Were his demands to be heard, the city would have to pay back the €500,000 to €600,000 it has spent on planning and on the design competition so far. The architects behind the top three entries might also end up demanding compensation, all of which would spell the end of the whole project and wreak the worst possible political damage -- as Grütter's predecessor Bernd Neumann told Leipzig's mayor last year.

In Berlin, meanwhile, there might be less protest, but the project on the government's own doorstep is severely hampered by technical challenges. The design in the capital envisages a 50-meter-long bowl-like construction that will seesaw when visitors climb onto it, the idea being that this will represent the "citizens in motion." Initiator Günter Nooke has described it as a "joyous monument" located "in the front row of German history."

But the response has been tepid. The vast construction is fraught with practical problems that threaten to spiral out of control. For now, the "budgetary framework" is being fleshed out and a permit for the project has yet to be issued. Blame cannot be exclusively assigned to the bats, whose tenacity has earned them the right to species-appropriate relocation. The authorities in charge have some tricky structural questions to answer: how can the monument be made accessible to people with disabilities? How can its surface be weather-proofed to withstand the cold Berlin winter?

Offices for historical preservation are also weighing into the debate. As it happens, intact historical mosaics have been uncovered on the site set to house the new monument. Kaiser Wilhelm might have looked good next to them, but they hardly match the monument to freedom and unity. A compromise will therefore need to be hammered out between the conservation experts and Milla & Partner, the team that won the competition. And they're already riled by the way the Chancellery is interfering with their project.

A number of slogans from the heady days of autumn 1989 were to be inscribed on the outside of the bowl, reflecting the dreams of the peaceful protestors, from "visa-free vacations in Hawaii" to "send the Stasi down the mines." But Grütters' predecessor Neumann, who grew up in Bremen, thought this was going a bit overboard. Who would get to choose which slogans made the cut? A committee of historians -- or former grassroots activists?

He suggested inscribing the bowl with the words "unity and justice and freedom" from the German national anthem instead, and secured the blessing of various members of the Bundestag. Grassroots activists are unlikely to appreciate his revision. So far, there has been no debate about the reference to the national anthem and Neumann's proposal remains classified.

Should the Berlin monument ever get the go-ahead, plenty additional challenges lie ahead. The costs of regular maintenance as well as round-the-clock security are expected to amount to some €130,000 a year. But who exactly will foot the bill?

The Chancellery is willing to fund the immediate costs of the undertaking, but argues that since the plinth of the damaged Kaiser memorial and the site itself belong to the city of Berlin, the local government should pay for the upkeep. None too happy about this arrangement, Berlin has generously offered the federal government the chance to take over the site.

In the meantime, the restoration work is forging ahead. Project leader Ulrike Jacobi is proud of the various finds the excavations have turned up, now stored under a tarpaulin -- including parts of the original monument found by divers scouring the floor of a trench for old munitions.

Work like this always has a few surprises in store, says Jacobi. She's worried by what vast supports will do to her lovely vault when they're installed to secure the new monument, assuming it's ever built.

And the deadlines? Back in the fresh air, Jacobi takes a deep breath, and says nothing.