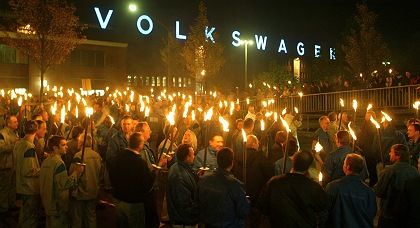 Blue-collar workers in Kassel, home of Documenta: "If I'm a worker, how am I supposed to find time for art?"

About halfway between Kassels central train station and Friedrichplatz, the central site of the Documenta 12 art exhibition, a self-made billboard has been propped on the sidewalk. With black letters painted on white cardstock, the sign poses a simple question: "After the 100 days, then what?"

The 100 days in question are the stretch of summer between June 15 and September 23, the duration of the highly anticipated Documenta 12 exhibition, the world's largest contemporary art show. The event draws aesthetes from around the world who make the pilgrimage to this quiet city tucked into the hills of western Germany. But, of the hundreds of thousands who will traverse the German countryside to arrive at Documenta, few are likely to consider what occurs in the normally sleepy city in the long stretches between the internationally heralded art show.

This one-sided relationship makes many residents of Kassel ambivalent about playing host to the masses. In 2002, the event attracted a record 650,000 visitors. I like Documenta, says Michael Schmeisser, organizer of a local alternative arts festival running parallel to the massive exhibition. But people should know that four-and-a-half out of every five years in Kassel are crappy.

In the past, residents have complained that Documenta's organizers have done little to involve the local community in the event that put Kassel on the world map. Documenta 11, held in 2002 and curated by Odwui Emwezor, came under particular criticism for its insularity -- professional critics found it too theory-obsessed and locals argued that it was entirely cut off from the city.

Residents like Schmeisser feel the glossy event is a far cry from the city's working-class roots. And his alternative festival attempts to tackle this paradox, dealing "with the differences between the (Documenta) image of Kassel and the city's actual reality." On most nights, it features concerts at local clubs, but a group going by the acronym "ARM," which means "poor" in German, also holds symbolic protests each evening wearing camouflage garb and claiming to "protect local culture from the invaders."

The art director of this years exhibition, Roger Buergel, has responded to such criticism at this year's Documenta by placing a renewed emphasis on Kassel as a city rather than just a quinquennial forum for the art world's elite.

Art isnt created in a vacuum -- instead it has its origins in societal themes and timely questions, Buergel writes in the Documenta 12 catalog. And these have their basis in a specific, local context. Were very fortunate to have Kassel as a host city. As a sign of good faith, he even took the unusual step of moving to Kassel three years ago.

A Mirror of Germany -- Good and Bad

This year, Buergel has made a concerted effort to use the local cityscape as the backdrop for the exhibition. In doing so, he's brought Documenta back to its origins. Kassel was chosen in 1955 to host the first international art exhibition in Germany after World War II partly because it was seen as representative of the country's post-war cities. It had been heavily bombed, and its recovery came through an emphasis on modern urban planning and heavy industry. Buergel argues that todays Kassel is equally representative of the problems faced by contemporary Germany: It is plagued by disappearing jobs, high unemployment, uninspiring post-war architecture and the stalled integration of immigrants.

Getting the international public to pay attention to those problems is easier said than done, though. The exhibition features several works that use Kassel as their subject -- two examples are Juergen Stollhans' "Caput Mortuum," a series of large charcoal drawings depicting historical and present-day street scenes in Kassel, and Danica Dakic's "El Dorado," a video installation featuring the testimony of child refugees who live in a safe house near Kassel. But those works are overwhelmed by the wealth of formalist art and international-minded political art selected by Buergel.

Indeed, to bridge the gap between visitors and locals, Buegel relies less on the art he's curated than on a team of 40 locals he's assembled to help with the official planning of this year's exhibition. The team is working with participating artists to organize events like the so-called "Salon de Refusses." The event will see artists and unemployed locals discuss the "crisis of modernity" in an open forum. An education tent created by the team will also see artists discussing their works in talks with local audiences.

Weve gone into the city and spread the word about the exhibition, says Ayse Güleç, a member of the team. Weve gone into mosques and immigration centers. These people didnt even know what Documenta was before.

Still, Güleç said she couldn't predict whether the Kassel event would attract large crowds of locals. We dont know who will come, Güleç says with a sigh. Some Kassel residents are skeptical. If Im a worker, how am I supposed to find time for art? asks Mohammed Arranghi, a local shop owner. And if Im unemployed, Im too worried to think about art. The people on the local planning team are middle class and they're always involved in these kinds of events.

Buergel does have a trump card: If the locals won't come to the art, he can bring the art to them. Some of the art at this year's Documenta has escaped the confines of the exhibition halls and intervened in Kassel's public spaces -- like Kirill Preobrazhenskiy's "Tram 4 Inner Voice Radio," a sound installation played on a busy public transportation route.

This strategy has been tried before, though. From 1982 through 1987, Joseph Beuys came to Kassel and planted 7,000 trees alongside slabs of stone as part of an installation called "7,000 Oaks," for Documenta 7. Visitors still snap photos of the trees, which have become an internationally renowned work of art. Kassel residents rarely take a second glance.

Documenta 12, in fact, may have already started on the wrong foot: One work of public art has was destroyed before the exhibition even opened by well-meaning locals who mistook it for trash. Lotty Rosenfeld, a Chilean artist, had taped white crosses to the pavement of Kassel's streets as a protest against violence. She discovered last week that her installation had been scraped off by local sanitation workers. "They scraped it off with shovels and just threw it into the trash," she said. "That hurt."

Buergel took the blame for the incident, but Rosenfeld, who's been installing similar work around the world for three decades, declined his offer to reinstall the piece. "Sometimes the crosses are removed on the same day, sometimes after a year, and sometimes not at all," she said. "But in Kassel, the process seemed particularly brutal."

Some think the burden of blame for alienating locals falls on the visitors. Theyre arrogant, says Horst Dicke. Period.

To workers in Kassel, the swarm of educated art aficionados who descend on the city every five years can seem like an alien invasion. Just walking around Kassel during Documenta, it's easy to differentiate the stylishly, loudly and sometimes even garishly dressed visitors from more dowdily dressed locals.

Wednesday evening offered a case in point. Betram Hilgen, Kassel's mayor, struggled to hold the attention of the some 1,000 Documenta attendees he had invited to an opening reception at city hall. Flanked by a rosy-cheeked teenage beauty pageant winner, Hilgen was trying to welcome the crowd to the city. He told them about the city's cultural history -- including the fact that the Brothers Grimm had once lived there -- but few seemed to listen. The assembled journalists, artists and curators were too caught up chatting with each other about the exhibition; the mayor could barely be heard. When Hilgen finished his remarks, the only sustained round of applause came from a group of local residents near the podium.

"They should be ashamed of themselves," says Holger Rohr, a member of the catering crew at the city hall reception, of the Documenta artists and curators. "If theyre going to have our beer, they should also respect our city."

Whether or not Documenta organizers manage to draw locals and involve them in the massive art event, they will contribute significantly to the local economy. The event this year will cost €19 million ($25.3 million) to mount, but visitors will spend many more times that figure at local hotels, restaurants and businesses. Indeed, Documenta's logo, a crudely drawn roman numeral 12, is the most popular marketing brand in the region right now -- and every restaurant, bar and clothing shop in the area seems keen to associate itself with the mega-exhibition.

"We put out a lot of money, and we get a lot of money back," says Mayor Hilgen. Hotels in the city are booked solid for much of the Documenta show and many residents of Kassel are looking to cash in by turning spare rooms into impromptu bed and breakfasts and renting them to visitors. Some housing sites on the Web have desperate message posts like this one: "I thought maybe someone in Kassel might let us sleep for five days on your floor or bathtub. Willing to pay."

According to Buergels plan, of course, feeding the regional economy is just one part of the exchange between locals and visitors. For Friday's opening party Buergel will eschew the traditional celeb-studded VIP reception for an open-air concert which the entire city is invited to attend. If things go as planned, artists this evening will be celebrating the opening of Documenta side-by-side with city residents.