If there's a place in Germany associated with rebellion these days, then it's the city of Limburg, where even the most pious of Catholics are protesting against their regional church leader, Bishop Franz-Peter Tebartz-van Elst. For several years, the bishop has been a lightning rod for criticism because he has lived in luxury while simultaneously extolling the virtues of poverty and humility. More than anything, though, he has become a symbol of a Catholic Church that has seen its membership swiftly dwindle in Germany following a series of scandals that have shaken public faith in the religious institution.

Tebartz-van Elst has been accused of lying, narcissism and of squandering church money with his extravagance. New accusations are being lodged against the bishop on an almost weekly basis, and even veteran pastors on the board of priests in Limburg have had enough. "Even though I love the Catholic Church, with all the wonderful people who work in it," one said on Monday morning, "I am still angry, disappointed and disgusted over what we are experiencing right now. This is not just about a single person, but also about the existing structures within the Catholic Church. They need to be changed once and for all, and perhaps the tragic incidents within our diocese will provide the impetus to do this."

Tebartz-van Elst's days appear to be numbered. Few believe the head of the diocese will still be in office within the coming days. The hold up: Tebartz-van Elst can only leave office is if he himself resigns. But so far he has eschewed the advice to step down given to him by other bishops. Meanwhile, efforts to find a different job for him in Rome have also failed to bear fruit. As long as the bishop, once a man viewed as a potentially great leader by conservative Catholics, remains in office, he will further damage the church's image.

The tide is quickly turning against him. During this weekend's services in Frankfurt and in many churches in smaller towns located within the diocese, direct or indirect criticism of Tebartz-van Elst prompted applause. "Life punishes those who wait too long to leave," Pastor Hubertus Janssen, a 75-year-old priest well-known throughout the diocese, said in the closing words of his sermon on Sunday, hinting that the bishop should step down. His followers clapped approvingly. People standing in front of the church said that priests as well as members of the church community needed to speak openly about the situation. "Loyalty is to the Gospel and not to bishops or any other office-holders," one said.

The only way left for solving the messy situation "would be a change in leadership," one said. Another Catholic, visibly angry about the situation, asked why the leadership within the diocese was "remaining silent, and why are they leaving us hanging as their rank and file as the bishop destroys the diocese?"

The priests' council, a sort of ruling body for the diocese that includes around 200 priests, has urgently called on the bishop to provide "comprehensive information and transparency" in the run-up to its next meeting. The body has said that responsibility must be taken for the mistakes that have been. The priests are also demanding answers about precise construction costs, flight costs and acquisition costs pertaining to the bishop's oft-criticized lifestyle.

The allegations against Tebartz-van Elst are numerous. He became known across the country as the "upgrade miracle of Germany," after SPIEGEL reported that he had flown first class to India, where he was supposedly helping poor children, after upgrading his ticket using Lufthansa miles accumulated by his general vicar, Franz Kaspar, who was also the subject of widespread criticism. When questioned about it, the Limburg bishop responded, "We flew business class."

He later contested that account, and since then he has been under investigation by public prosecutors in Hamburg for submitting false affidavits. If prosecuted and convicted, the crime can be punished with up to three years in prison. But it is not just this issue that is creating problems for the bishop. Catholics in Limburg are also questioning his credibility because of the construction, under his direction, of a pompous new bishop's headquarters in the city. He has also been criticized for the exaggerated gold brocade he wears and his eccentric, incense-filled masses.

His behavior has prompted numerous questions. Why, for example, was cathedral capital, a body usually responsible for oversight, stripped from the responsibility of supervising the bishop's finances? Does anyone even watch over his spending? Not a single priest in the diocese seems to knows what the bishop is doing with the church's money.

Tebartz-van Elst has been the subject of serious criticism over the millions in financing for his headquarters. He recently moved into the building complex, located next to the Limburg cathedral, but still hasn't provided any clear indication of the actual costs of the construction project. In response to a question from the media, he recently estimated the value of his apartment in the complex at €200,000 ($268,000). But he has since been forced to concede that construction costs for the entire headquarters were considerably greater than €10 million.

So what is the actual figure? €15 million? Or is it, as some Limburg church officials suspect, as high as €20 million? Members of the church have been waiting in vain for answers -- and wondering who is ultimately going to get stuck with the bill. There may also be another reason behind the fudging of the costs. It appears that church rules governing this kind of construction project -- and, surely, other investments by German dioceses -- stipulate that projects expected to exceed €5 million in costs require approval from the Vatican in Rome. And that has some asking whether the construction in Limburg was ever permitted.

Other transactions figuring in the millions between the diocesan household and the see, including the sale of residential properties, also appear to have been dubious in nature. Were the actions taken to support the bishop's pompous image and luxury lifestyle? So far, the diocese has not responded to reporters' questions on the subject.

On Monday, one priest in Frankfurt told SPIEGEL ONLINE about an otherwise quiet and pious woman on his local parish council. "She can no longer take being showered with mockery and malice just because she is Catholic and belongs to the Limburg diocese," he said.

On Sunday evening, an informal group of respected and influential priests within the diocese, the so-called Hofheim Circle, met in the city of the same name and agreed on the language of a statement in which they call for everything to be laid out on the table, for every expense to be documented. The Hofheimer pastors are also calling for the creation of a special "Commission for Dialogue and Participation" crisis panel.

Werner Otto, a youth pastor from Frankfurt, the largest city in the diocese, and a member of the Hofheim group of priests, said, "things that affect everyone should be discussed and decided on by everyone." On Friday, leading priests from the diocese are expected to meet. As that meeting approaches, though, one thing is clear: Tebartz-van Elst doesn't have much time remaining in office. In the coming weeks, and likely before the next full meeting of the German Bishops' Conference, the Hamburg public prosecutor's office is expected to release the results of its investigation into the bishop. On that front, things aren't looking very rosy for Tebartz-van Elst. His attorneys have already been producing one document after another in the hope of warding off the worst.

Like those within the Hofheim circle, other priests share a majority opinion that if Tebartz-van Elst crossed a red line, then the clerics in his diocese will have to demand his resignation.

'He Has Lost Touch with Reality'

Patrick Dehm, the former head of a Catholic learning center in Frankfurt known as the Haus der Begegnung, who was fired without notice by the bishop in 2012, said he doesn't believe Catholics in Limburg can have a future with their bishop. "Tebartz-van Elst has lost touch with reality," he said. "He's no shepherd of the people. He's only interested in preserving his power and his privileges." The fact that he had fired several critics in the past year, Dehm said, had "led to a major confidence crisis and to people leaving the church."

Recently, Johannes zu Eltz, a senior Catholic deacon in Frankfurt, recommended to Tebartz-van Elst in a private meeting that he should take a seven-year break to lead the poorest parish in the diocese before returning to the role of bishop. Dehm said he felt it had been a "very fair suggestion".

Dehm now believes there is only one way out of the crisis. "The diocese of Limburg used to be a place of creativity, cooperation and one where there was ample room for vision, but now it feels like it has been invaded by some royal court. We need protests to put an end to this." 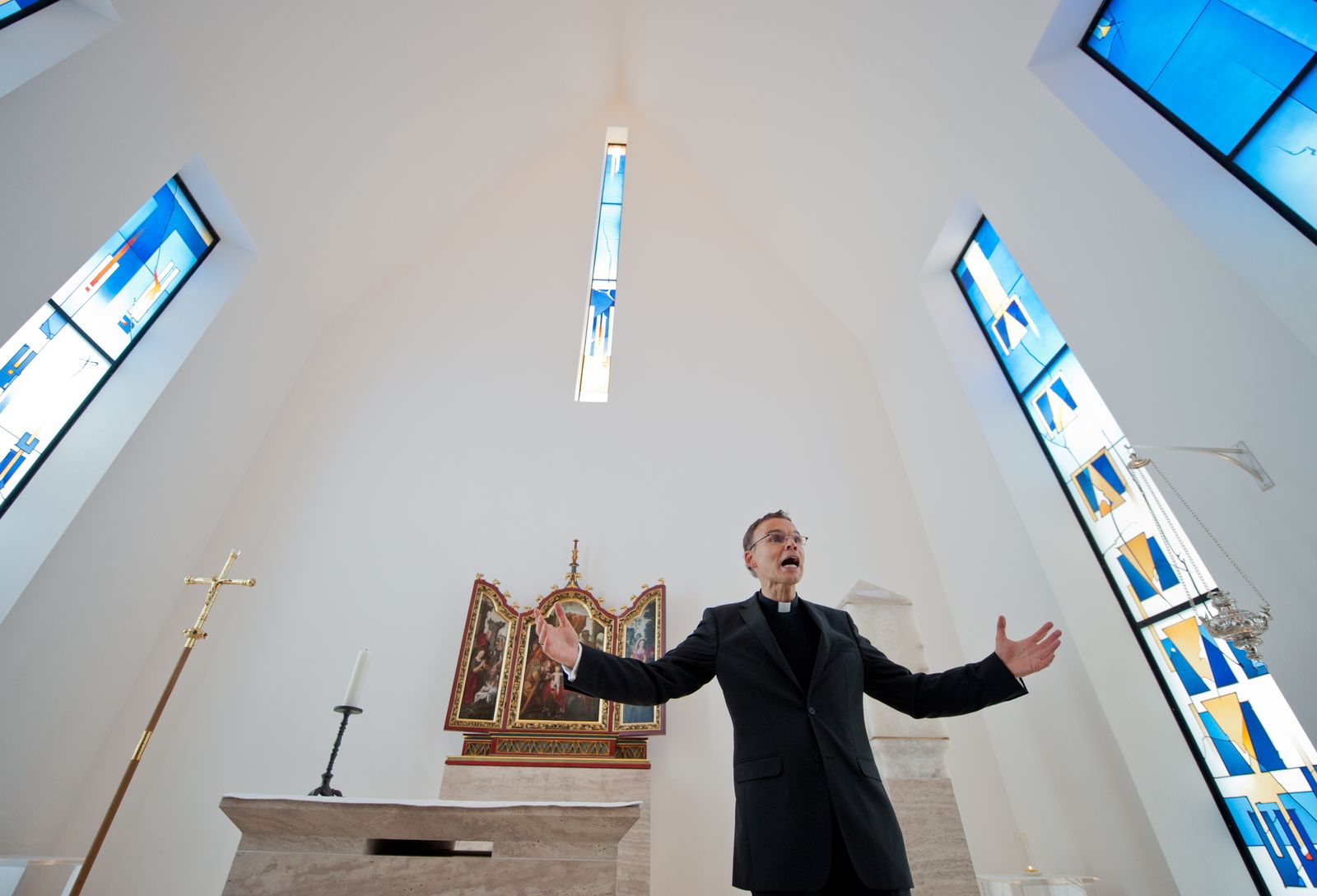 Franz-Peter Tebartz-van Elst, the Bishop of Limburg, has become the subject of Catholic Church protests in Germany.