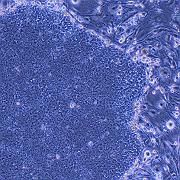 German lawmakers have voted to loosen the limits on stem cell research.

In a decision welcomed by scientists, German lawmakers have approved a law which eases restrictions on stem cell research in the country.

Members of Germany's lower house of parliament, the Bundestag, passed the controversial law in a 346-228 vote Friday after a heated debate which cut across party lines.

Germany's Catholic Church had opposed the change in the deadline, but Technology Minister Annette Schavan -- herself a conservative and a Catholic -- had backed the new law, saying the change was essential to allow German researchers to keep up with scientists in other countries. Speaking after Friday's vote, Schavan said the decision was a "good signal" for science.

In 2002, the German parliament banned the production of embryonic cells from pre-existing stem cell lines. It also prohibited scientists from working on lines created after Jan. 1, 2002, in a bid to stop foreign laboratories from producing lines specifically for the German market. A stem cell line uses stem cells obtained from humans to make new cells for research purposes.

German researchers, who had argued that many of the pre-2002 cell lines were no longer usable and that they needed access to newer cells, welcomed the decision Friday. "We are relieved that this compromise has been reached," said the Bonn-based stem cell researcher Oliver Brüstle. "This will make cooperating on international projects -- especially within Europe -- much easier." However other scientists said the new law did not go far enough and called for the deadline system to be scrapped.

The Federation of German Industries (BDI) also welcomed the new law. "In this way, Germany can continue to participate at the forefront of health research," BDI head Werner Schnappauf said Friday, adding that the decision protected jobs and maintained Germany's attractiveness as a business location.

However, the Catholic Church expressed its disappointment at the decision. "We warned against this decision, because we feel it is not justified and, with a view to protecting life in biomedical research, sends the wrong signal," said the president of the Central Committee of German Catholics (ZdK), Hans Joachim Meyer. He said it was important to make sure that the deadline was not now seen as something that could be constantly shifted back: "With this decision, the demands to be able to use human embryos in general for research purposes will become greater."

Stem cells are prized by researchers because they are capable of turning into a wide range of different cell types. Many scientists believe the cells have the potential to allow conditions such as heart disease, diabetes and Parkinsons' disease to be treated, as stem cells could theoretically be used to generate healthy cells to replace damaged tissue. However, opponents of stem cell research say it is unethical, as starting a stem cell line generally involves destroying a human embryo.

Lawmakers in Germany tend to be conservative about genetic research because of the historical legacy of the crude experiments conducted on concentration camp inmates during the Nazi era. However some observers feel that importing stem cells, rather than producing them in Germany, shows an unwillingness to face up to difficult issues.