A German election campaign poster featuring the naked buttocks of a black woman being squeezed by the hands of a white woman under the slogan "The Only Reason to Vote Black" has provoked accusations of racism. 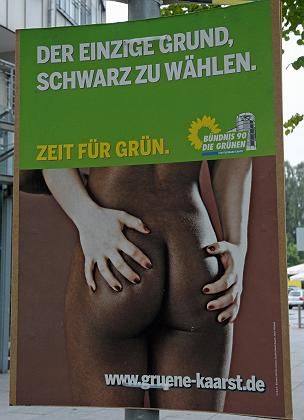 The Greens election poster in the German town of Kaarst.

The poster put up by the environmental Greens party in the western town of Kaarst contains a play on words: "Black" in German party politics refers to the color colloquially used to describe Chancellor Angela Merkel's conservative Christian Democratic Union (CDU) party. Other major parties are described as red, yellow and, of course, green.

The poster is meant to highlight the Greens' support for same-sex partnerships, said the local head of the Greens, Christian Gaumitz, according to the daily Rheinische Post. "We only put up a small number of these posters. The response has been very big, but the majority of people share our understanding of the subject: that it's provocative, but not tasteless."

Locals have complained that the poster is racist and tasteless, according to media reports.