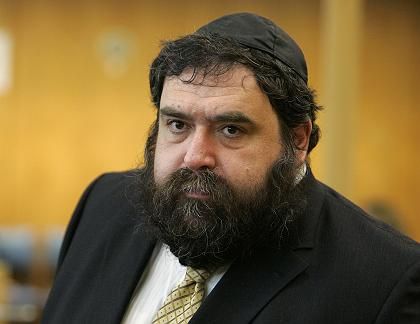 Rabbi Zalman Gurevitch, who was stabbed by an Afghanistan-born man on a street in Frankfurt last September, during the trial.

A German court sentenced a 23-year-old man Afghanistan-born man to three-and-a-half years in jail on Tuesday for stabbing and seriously injuringa rabbi in Frankfurt last September.

The unemployed German Muslim, named only as Sajed A., stabbed rabbi Zalman Gurevitch, 42, in an altercation with the orthodox Jewish cleric who had been walking down a street with two companions.

The court convicted him of causing grievous bodily harm. The Frankfurt public prosecutor's office had initially planned to charge him with attempted manslaughter but refrained from doing so after investigating the case. During the trial an eyewitness said the two men had been involved in an argument before the stabbing occurred.

Judge Klaus Drescher told the court that the defendant called Gurevitch a "Shit Jew" and "Jewish Pig." But the judge added it had not been proven that Sajed A. had also threatened to kill him. The stabbing last year heightened fears of anti-Semitic attacks among Germany's Jewish community, which criticized the sentence as too lenient on Tuesday.

The court was unable to determine exactly what happened immediately before the stabbing, partly because two important witnesses, the man and the woman who had been walking with Gurevitch, refused to attend the trial. Both those witnesses live abroad and are of the Jewish faith, and they said they didn't want to come to the trial because they feared for their safety.

Gurevitch was a co-plaintiff in the trial and had demanded a manslaughter verdict. His lawyer Rolf Döring said he would probably appeal against the verdict because he believed the court had understimated the threat posed by the defendant.

"After a verdict like this Frankfurt has become more unsafe for Jews," said student Moshe Mendelzon, who had attended the trial with a group of young orthodox Jews to support the rabbi.

The chairman of Frankfurt's Jewish community, Salomon Korn, said the sentence was too lenient. "The court has given a clear message to potential stabbers," Korn told the dpa German news agency.

He said the court should have tried to set a bigger deterrent. "Otherwise copycat attackers can hope for similiarly lenient verdicts."