It's not easy for a German camera crew working at the White House to get a good spot for their camera. In terms of priority rankings, the German media are about as important as the Albanians. Which is why Heike Slansky, a correspondent for German public service channel ZDF had to be particularly persistent in her efforts for footage when Chancellor Angela Merkel came to visit President Barack Obama in America at the end of June. 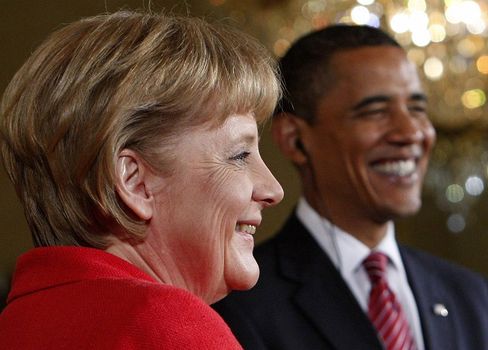 All smiles: Barack Obama is apparently confident that Angela Merkel will win re-election in September.

"At first we were only allowed to film the Chancellor's arrival," the German journalist recalled. However shortly before the meeting, her television crew learned that they would also be able to film Obama and Merkel making their way from the Oval office to a press conference in the East Room of the White House. And as the leaders strode down the corridor, their respective press secretaries -- Robert Gibbs and Ulrich Wilhelm -- in tow, something happened that Slansky still doesn't quite understand.

Just as Obama and Merkel were walking past the camera, the German chancellor said: "We have to prepare our election campaign." Obama smiled, waved his left hand somewhat nonchalantly and said, "Ah, you've already won. I don't know what you always worry about."

Merkel laughed, but looked surprised. And the ZDF cameraman realized immediately that he had captured a very unusual scene. When the piece went to air Slansky opened her piece on the current affairs show, Heute Journal, with Obama's words -- although she did not add Merkel's hard-to-comprehend earlier comments. And the tone of the correspondent's voiceover made viewers expect a light-hearted story on the relationship between Obama and Merkel rather than a piece of hard news. Besides, the death of pop singer Michael Jackson dominated headlines on the Friday of Merkel's visit. So Obama's comments on the German election outcome went largely unnoticed.

Nonetheless the forecast is astonishing, especially in the middle of the German election campaign. It is standard diplomatic practice among allied nations for governments not to predict the outcome of each other's elections. But Obama's throwaway comments appear to indicate that his team consider Merkel's election victory a given. This was further demonstrated by Obama's effuse praise of Merkel (he spoke of her "wisdom" and "candor") at the subsequent news conference in Washington and by Nancy Pelosi, speaker of the US House of Representatives, who invited Merkel to hold a speech in Congress the next time she visits the US.

'Even an American President is no Prophet'

At first the team working for Foreign Minister Frank-Walter Steinmeier -- the Social Democrat nominee running against Merkel in the September 27 federal election -- tried to make out that it wasn't really clear from the original recording what Obama was actually talking about. You couldn't really hear what Merkel said beforehand, they argued. But after SPIEGEL heard the complete recording several times, including the comments from Merkel, and confronted Steinmeier's team with it, the eventual reaction was sharper. Steinmeier "thinks a great deal of Mr Obama but even an American President is no prophet," they said, adding that German voters are the only ones who can decide who will become Chancellor.

A trip by the SPD politician to Washington has now been completely ruled out. One such visit had been scheduled for July but the White House cancelled it. The Foreign Minister's team had considered trying to organize a visit in August but has now abandoned those plans. Steinmeier's team says that after four years as Foreign Minister, he "doesn't need to to prove his competence in foreign affairs".

Obama's sudden enthusiasm for Merkel is a major setback for Steinmeier, who has made big efforts to woo the US President who is so popular in Germany. Unlike Merkel, Steinmeier was all for letting Obama speak in front of Berlin's Brandenburg Gate last July while he was campaigning for the presidency. In the end, Obama held his speech a few hundred meters away at the Victory Column.

Steinmeier even published an open letter to Obama in SPIEGEL, praised Obama's efforts for nuclear disarmament and adopted the "Yes, We Can" slogan of the US Democrats.

Despite Obama's off-the-cuff comment, Steinmeier and his people still think the world of the US President. By contrast, Merkel was so cool towards Obama until recently that his own staff commented about the lack of warmth between the two politicians. But it seems that, in the nick of time and just before the general election, Merkel has found a powerful advocate in the White House.

Steinmeier's team are no longer under any illusion that they might clinch a White House visit to score points in the election campaign. For one thing Obama has put a stop to speculation that he and Merkel don't get on. His charm offensive towards Merkel at the end of June was so strong that Steinmeier wouldn't be able to top it -- and even if he did, hardly anyone would notice. It is difficult enough for a Foreign Minister to get an appointment with the US President. A joint appearance in front of the press is just a fantasy.

In addition, Steinmeier would have had to cancel some campaign appearances in Germany if he had visited Washington in August. That is something the challenger can't really afford to do.