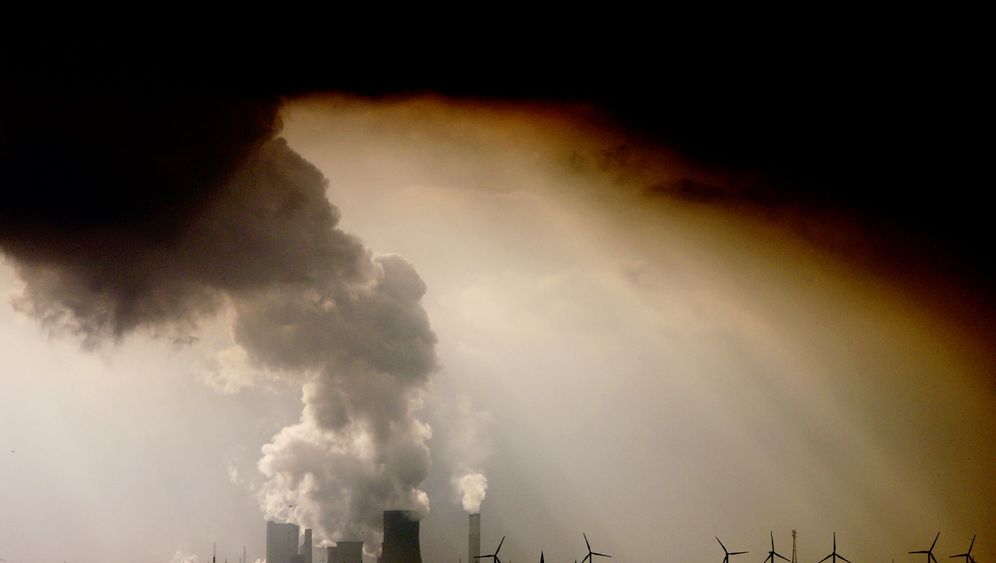 "I have three children," German Environment Minister Norbert Röttgen said during a speech in Berlin last week, as he ventured to explain why climate policy still remains important after December's failed summit in Copenhagen. He said that a maximum rise in temperature of 2 degrees Celsius "is the highest amount that we can still tolerate, because beyond that life will no longer be possible as we know it."

Currently the prospects are not so good that his children will enjoy a life that remains unchanged. True, starting this weekend, the German government will attempt to rekindle international efforts to save the Earth's climate as it hosts a conference at the Petersberg Hotel near Bonn. But, at the same time, German Chancellor Angela Merkel has now decided to change the course of her climate policy.

As recently as last December she said: "If we don't succeed in limiting global warming to 2 degrees, then the costs of the resulting damages will be many times higher than what we now, with a change in our lifestyle, can achieve."

Now it's a different story: Merkel will no longer endeavor to contractually implement the 2-degree target -- in other words, to reach a legally binding agreement with specific reductions in greenhouse gas emissions. She doesn't want to be snubbed again because she has realized that important countries won't lend their support the next time around either. This was confirmed two weeks ago at the nuclear summit in Washington by Chinese President Hu Jintao and Indian Prime Minister Manmohan Singh.

The Limits of Germany's Influence

Germany now has to acknowledge the limits of its influence. The country's climate policy was an attempt to play a leadership role on the grand stage. But the others didn't follow suit. On paper they praise the objective, but they are not prepared to do more than make vague promises. The only way forward, it seems, is by taking side roads. But even there the Chinese and the Indians won't simply trot along behind the Germans.

On the domestic front, this threatens to bring down the great symbol of Germany's efforts to remodel society in line with a climate-friendly lifestyle and mode of production. If Merkel is no longer fighting on the international stage to achieve the 2-degree target, how does she intend to convince her fellow Germans that they have to change anything? A domestic temperature target would be absurd.

Back in Copenhagen the chancellor was still defending global mandatory target values in the face of extreme resistance from China and India. At a meeting of the heads of state on the margins of the summit -- which was racing towards collapse with every passing minute -- Merkel even engaged in a showdown with the two new superpowers. "The IPCC report comes to 2 degrees," said Merkel. "And it also says that we have to reduce (carbon dioxide emissions) by 50 percent."

She wanted to make it clear to Chinese delegation leader He Yafei and the Indian negotiator present that they also had to do their part to achieve the 2-degree target. "Let us suppose there is a 100 percent reduction -- (e.g.) no CO2 in the developed countries anymore," even then you would have to "reduce carbon emissions in the developing countries" in order to reach the 2-degree goal, the visibly irritated chancellor said. "That is the truth."

When the Indian negotiator absolutely refused to accept any concrete targets in the Copenhagen Protocol, Merkel dropped the diplomatic etiquette. "But then you do not want legally binding!" she yelled at the leader of a nation with over a billion people. The Indian negotiator literally shouted back: "That's not fair!" His Chinese colleague, Deputy Foreign Minister He Yafei, added calmly and in polished English: "The current formulation would not be agreed."

'The Process Has Come to a Standstill'

The collapse of the Copenhagen summit has permanently shaken up Merkel. She offered to organize the meeting in Bonn to avoid totally losing momentum in the talks. Then she left Denmark feeling frustrated. She had rarely experienced such a humiliation. She won't let that happen to her again, she has told herself ever since. Irregularities committed by the Intergovernmental Panel on Climate Change (IPCC) also annoyed the chancellor. Although these errors have not altered the urgent and key messages, she has angrily said among her close advisers that the IPCC's poor communication has made it more difficult to promote climate protection.

The general mood among climate protectors has soured even further in the months since Copenhagen. "The process has come to a standstill, everything is very difficult," says Röttgen.

This weekend in Bonn he wants to give global climate policies a new boost. Merkel is attending and Mexican President Felipe Caldéron will be on hand along with environment ministers and negotiators from nearly 50 countries. They intend to draw lessons from the debacle at Copenhagen and prepare the next big climate conference in Cancún at the end of the year. A binding agreement for the 2-degree target will not be achieved there, either.

The environment minister remains valiant. He says that he and the chancellor are "not looking to abandon the 2-degree target, but rather to find new ways to attain it," says Röttgen. But that could also take significantly longer. If the resolutions that countries laid down in the "Copenhagen Accord" are implemented, the average global temperature is expected to rise by over three degrees Celsius during this century. Climatologists warn that this could lead to a dangerous warm period.

A Time for Realpolitik

After having dreamt of achieving the great objective, now it's time for realpolitik. Merkel and Röttgen had to admit that countries like China and India will not submit to a mandatory target that others have contrived. They are continuing to pursue their climate policies, but are focusing strictly on domestic issues -- and neither is willing to relinquish any of their sovereignty. Germany is adapting to this and now plans to launch concrete climate protection projects with individual partner countries. Röttgen speaks of a new approach: "In Bonn we want to create a new level that will allow us not only to point towards CO2 targets from above, but also to launch projects from below that produce measurable successes." This includes forest protection and more concrete cooperation in the transfer of environmentally friendly technologies.

But it is precisely in the area of pledging funds for such projects that Merkel has failed to come through. After Copenhagen she distanced herself from the promise of Germany contributing an additional €1.3 billion ($1.75 billion) by the year 2012. According to current figures, only €210 million in extra cash will be injected into programs. "When you see how many extra billions of euros are haphazardly pumped into the health care system, it's pretty disheartening," says a top-ranking official in Röttgen's ministry.

There is a contradiction here: While Germany primarily intends to rely on practical projects to achieve the 2-degree target, the government is spending significantly less money on these projects than it has pledged. This could mean that Germany is also effectively distancing itself from the target.

There are also differences of opinion within the European Union in Brussels. The environment minister is campaigning within his circle of colleagues for the EU to unilaterally increase its reductions of carbon dioxide emissions from 20 to 30 percent. Merkel has indicated within the circle of her high-ranking colleagues, however, that she no longer supports the idea of Europe going it alone.

Röttgen is already trying to move forward by emphasizing additional arguments beyond the 2-degree target -- primarily based on economic reasoning. "We can live well and cheaply now at our children's expense over the next 20 years or invest in long-term opportunities," he says. German environmental technologies are an export hit, "one of the leading sources of prosperity that we have," and crude oil and other natural resources are becoming increasingly scarce, he adds. But he still hasn't made any significant headway in convincing the ministers in his coalition government -- which is comprised of Merkel's conservative Christian Democrats and the business-friendly Free Democratic Party -- that climate protection is not a hopeless issue plagued by sacrifice, but rather a "win-win-win opportunity" for industry, the environment and future generations. Here, too, he is fighting an uphill battle.

Correction: In the print edition of DER SPIEGEL, the comments from the Indian negotiator were attributed to Indian Prime Minister Manmohan Singh. Merkel's Chancellery attributes this and following comments to a low ranking Indian negotiator."